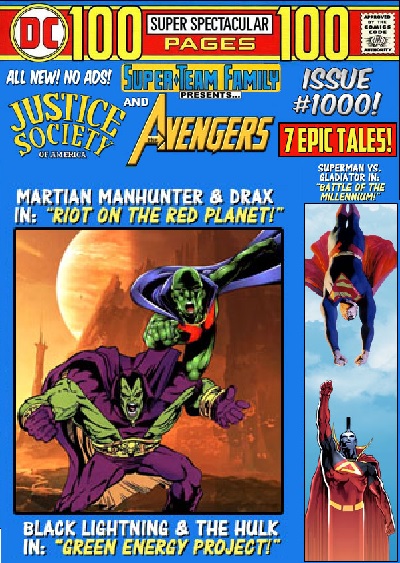 In the long life of The Brave and the Bold / Marvel Two-in-One: The Lost Issues, Ross has surely reached a lot of numerical milestones by posting every weekday. #1000 has to be among the most memorable though, since in 2015 no American super-hero comics had made it to that many issues, far eclipsing the combined runs of the various team-up titles that inspired the project. Also, people still paid attention to blogs in 2015. For the occasion, Ross did a real tour de force post, including scan of childhood hand-drawn team-up comics, how-to tutorial, best of gallery, and more! This is clearly a lifelong passion project, as evidence by his still going another half-dozen years since.

Ross also produced a special 1000th edition speculative comic in the tradition of DC Comics' 100 Page Giants, offering seven different pairings involving Batman, Deadpool, The Thing, Firestorm, The Hulk, Black Lightning, Superman, Gladiator, Ant-Man, The Atom... The primary story involved the Avengers and JSA, but for the purposes of this blog, a (crudely) foregrounded a back-up with J'Onn J'Onzz and Drax titled "Riot on the Red Planet!"

I just noticed that I screwed-up last week's link for Tars Tarkas, but another entry in my short-lived Martian Knock-Offs series of posts was Drax the Destroyer. Even by 2011, the characters had diverged sharply, to the point where the similarities ended with broad physical characteristics. Certainly, no one who has seen Dave Bautista (and of course James Gunn's) portrayal of an obtuse, brutally violent, fairly misogynistic MCU anti-hero would confuse the character with the more empathetic and pensive live action Alien Atlas. That said, the Marvel Cinematic Universe has made Drax a full blooded alien mourning a deceased wife and child with deep wells of sadness detected by his psychic cohort Mantis, so in some ways they're even more alike today.

The images here were taken, I believe, from a Phil Jimenez two-page massive group spread from JLA Secret Files & Origins and a Ron Lim cover for Silver Sufer when Drax was still in his imbecilic Hulk phase. I was a huge Adam Warlock fan growing up, but unless Jim Starlin were to do the project, preferably in 1977, I doubt this would be my bad today.
Posted by Diabolu Frank at 6:29 PM

I remember when Drax was redesigned how much he looked like J'Onn I was very shocked at that.

Oh, the parallels seemed to be there from the beginning, but then again, the grimness in J'Onn wasn't really present until the very late Silver Age/early Bronze Age. Might just be a coincidence or perspective colored by hindsight. Starlin wasn't particularly fond of DC, so...