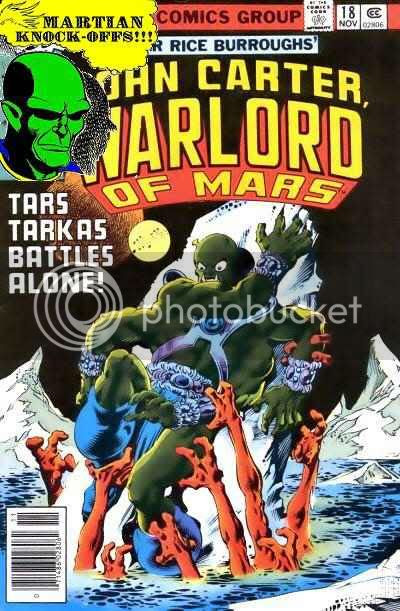 Johnny Jones here, with another ona'a them influences on my development, but don'cha dare call me a Martian Knock-Off of...

Tars Tarkas was the leader of the largest army of four-armed, antennae-bearing green warriors on the planet Mars, though they called it Barsoom... or at least that's how it's written in Edgar Rice Burroughs' John Carter: Warlord of Mars novel series. Burroughs is best remembered as the creator of Tarzan, but this series is much beloved, and still in print today.

Transported from Earth to Mars during the U.S. Civil War, Carter quickly found love and action on his new home world. He was soon captured by a group of Martian warriors, until his ability to jump great distances on Mars' surface made him a form of entertainment among the native people. Carter was placed under the watch of the great fighter and leader Tars Tarkas. Over time, John Carter also became a warlord, and a trusted friend to Tars. Tarkas himself eventually rose to the rank of emperor of his world.

In the 1970's Marvel Comic, Tars Tarkas wore a blue loincloth and cavalier boots. A chestpiece crossed his chest in an "x" shape, and his eyes often glowed red. It felts so good to be acknowledged... Like my existence and parentage were finally validated... I-- *choke* --I get so emotional. I don't want you to see me like this...

Tars, as noted, had four arms and two legs. His eyes rested on inch tall stalks that could look in any direction, separate or together, with bright red irises. He was hairless, with olive green skin. He had bright white teeth, with tusks that curved up toward his eyes. He stood fifteen feet tall, and would weigh about four hundred pounds on Earth. Because of Mars' lighter gravity, Martian bodies were much weaker and more fragile than a human's. A smile on Mars was equivalent to a perfunctory handshake here. Their laughter was usually a reaction to the suffering of others, and they were known to torture captives mercilessly to provoke merriment.

"Evidently devoid of all the finer sentiments of friendship, love, or affection, [the Martian] people fairly worship physical prowess and bravery, and nothing is too good for the object of their adoration as long as he maintains his position by repeated examples of his skill, strength, and courage."

-from "A Princess of Mars"
Posted by Diabolu Frank at 1:00 AM

I just started reading A Princess of Mars a couple of days ago...as soon as I got to the part about the Martians having red eyes and green skin I was greatly amused.

The boots were the give away! FOR SHAME TARS! LOL