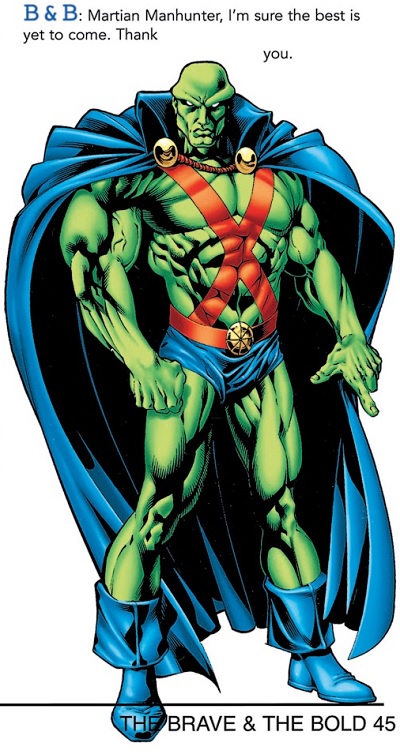 As I discussed in previous weeks, JLA Secret Files and Origins #1 was a key book for neophyte Alien Atlas allies turned on by the surprise success of JLA. You had a new Starro story by the hot creative team of Grant Morrison and Howard Porter, bridging the gap between Justice League: A Midsummer's Nightmare and the relaunch. You had "Lost Pages" from between JLA #4 & 5. You had profile pages of the individual team members by the creative teams of their solo titles. You had "A Day In The Life: Martian Manhunter", probably the first J'Onn J'Onzz solo story for many. And finally, this mock interview by Mark Millar & Don Hillsman for the fictional in-universe "The Brave & The Bold" magazine. Along with a series of Playboy style headshots at the top of the piece, there was the full figure above, which served as "the" Martian Manhunter image of the turn-of-the-century internet. Despite the weird organic foam finger action, there is perhaps no greater example of broad fan rejection of Tom Mandrake's years toiling on the ongoing series than the ubiquity of this picture in the same time frame. An editorializing quote from Who's Whose DC Timeline: "John Ostrander’s Martian Manhunter delves into the soul of the only founding member of the JLA never to have his own title, much to the disgust of fanboys who apparently expected something else. Lots of punching and kicking maybe? Still, the series lasts 36+ issues." Well, as a fan who was kicking and screaming by the end of those three years, perhaps it was because everything in this issue geared readers for a title about the Pacific Rim's greatest protector, and the actual ongoing tossed that aside with a single issue robotto manga pastiche? The piece opens with the interviewer acknowledging J'Onn's sensitivity to their possible concerns over being seen in public with a Martian, offering to change for discretion, though the admitted clout-chaser declines. They then discuss the JLA's internal conversations regarding nations' discomfort with a Justice League of America following the dissolution of the U.N. sanctioned international operation, their commitment to preserving their humanism, protests against perceived League authoritarianism, and the Martian Marvel's specific efforts to address the imbalance of metahuman protections outside the Anglo-Saxon West. Clearly saving all that deep "my evil twin brother, Gumby Venom," for Ostrander. Nothing communicates the sociopolitical impact of superhumans like writing a one-off of Beatriz da Costa talking like Charo while battling a racially caricatured voodoo doctor from a '70s Blaxploitation Bond movie. But I'm not bitter. There's talk of Z'Onn Z'Orr, the ancient Martian city destroyed in the first extended arc of the series in favor of... a generic pyramid? There's a multiplicity of international identities offered, with endless story possibilities teased, replaced by the tired exploration of duality in a super-hero comic, itself abandoned for the monotony of simple Martian Manhunter Team-Up. TIL there's a sly reference to actor Gregory Reed playing J'Onn in a potential movie. There's acknowledgement of his loneliness as a widower, but also his deep religious convictions and romantic incompatibility stemming from his alien nature. Unlike that time he shagged Jemm's fiance, centuries his junior, from a race still suffering the effects of slavery and colonization by Martians, coloring his long history of mentoring young girls? We're still having fun, right? Considering what could have been? Yeah, this is fun.
Posted by Diabolu Frank at 12:00 AM

Labels: 1990s, JLA, Martian Manhunter, The Rock of the JLA

I always thought it was weird that Fire was talking like that.

We harped on that for years on the message boards. Portuguese!