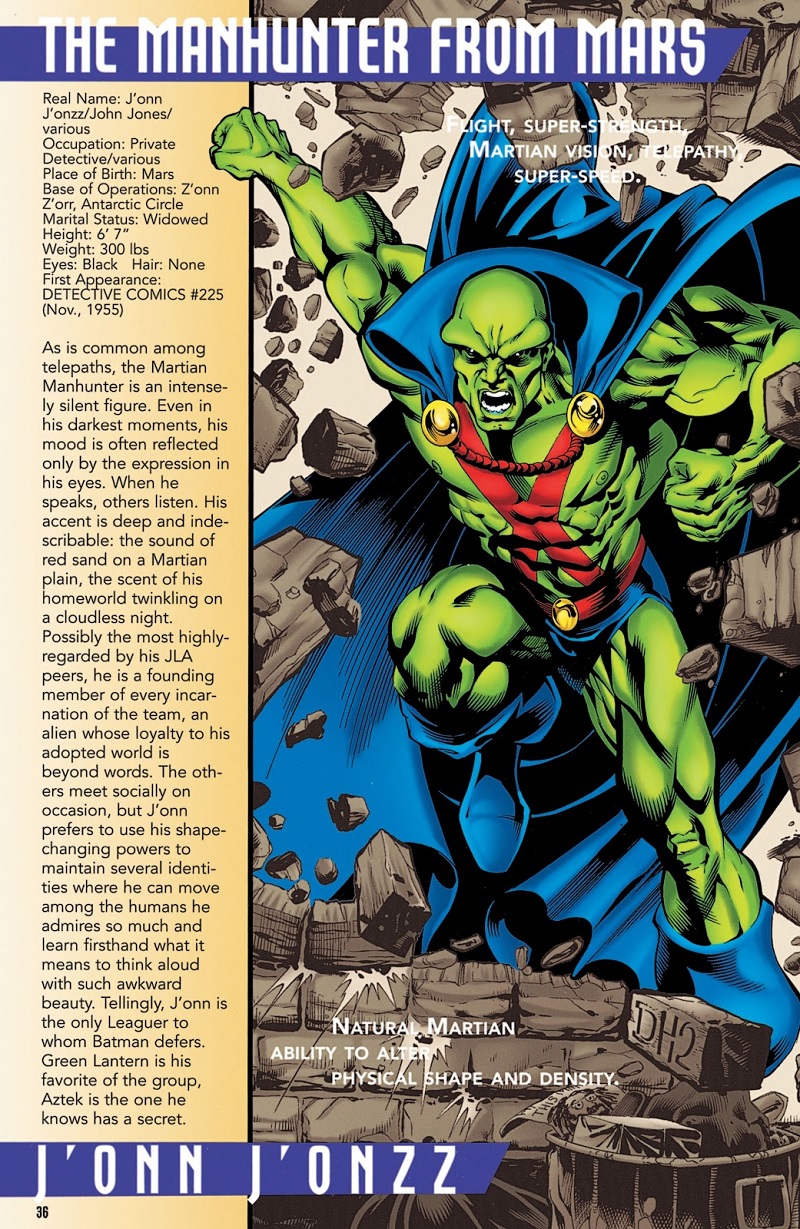 I can carbon date my J'Onn J'Onzz fandom to August 7, 1996. As I've discussed many times before, my familiarity with the character went back about twelve years earlier, to house ads from the time of the Martian Marvel's 1984 return in Justice League of America, and I bought his Super Powers action figure the following year. That was one of my favorite toys growing up, and I had plenty of experiences with the Alien Atlas in the comics. I consider them near misses-- instances of my liking and having an interest in exploring the Martian Manhunter, but still not quite connecting in a significant way.

I was working at a comic shop in 1996, so I would have taken Justice League: A Midsummer's Nightmare #2 home on its day of release. I recall reading it in bed, reaching that glorious gut punch of a splash page by Jeff Johnson, in a sequence co-writer Mark Waid credited to Fabian Nicieza. In period parlance, it was Agent Kujan finally deducing the identity of Keyser Söze, Neo suddenly knowing kung-fu, or Cher Horowitz realizing that she loved Josh. A switch just flipped. I stole a car, drove west, played an 8-track at full blast until it stopped, got out of the car, got in a fight, got back into the car, drove back to town, went to the Cargas Club, and then got into the most prestigious hotel of all time. I was a Martian Manhunter fan, man.

A quarter century later, with admitted gaps and lots of burn out, I'm still here plugging away. But a journey of a thousand miles begins with baby steps, or some such. I was still a Padawan with much to learn, from older fans like Commander Benson on the DC Message Boards, or from scavenged back issues. There were no wikis back then, and very few fan pages. Virtually all of them referenced Don Hillsman's art from JLA Secret Files & Origins, as I was surely not alone in a newfound appreciation of the Martian Manhunter amidst the explosive success of JLA. For many of us, this was the gateway.

"All Who's Who pages written by Mark Millar and colored by Tom McCraw" if you can believe it.
Posted by Diabolu Frank at 1:33 PM

Labels: 1990s, JLA, Martian Manhunter, The Rock of the JLA

I'm just happy anybody bothers to read this stuff. :)