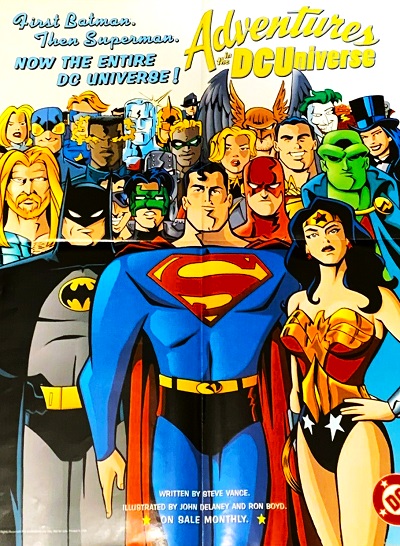 I was watching FOX on the Sunday evening of September 6, 1992 when the networked debuted Batman: The Animated Series, and either that night or soon after took to taping the broadcasts on long play EP-setting VHS tapes that I made crude custom sleeves to adorn (out of TV guide ads and other ephemera.) I had done the same thing for the early episodes of X-Men, (using trading cards and a Wizard magazine back cover ad,) and which I also recorded upon their debut, well ahead of the proper series' arrival. Wikipedia and the BTAS Wiki reports the show was launched the previous Saturday with "The Cat and the Claw: Part 1," with the second part offered on the following Saturday, but that's not how I remember it, so make of that what you will. These were the days when super-hero animated adaptations were still uncommon, and ones taking the material seriously especially rare, so I was enthused by any offering of familiar properties. I probably saw most of the first several seasons on FOX Kids afternoons. I thought it was a good show that captured the feel of the comics and sometimes bettered it, but also my interest in Batman began to wane, and I didn't find the noir-ish detective stories lent themselves to repeat viewings. Superman: The Animated Series seems to have been much less loved, with "STAS" yielding no immediate search results in the way "BTAS" does. I was also over videotaping most super-hero programing by September 6, 1996, but I certainly watched the three-part origin "movie" upon its premiere on the Kids WB, though I don't recall it being on a Friday? I better enjoyed the Krypton saga than Batman battling Man-Bat, despite one of my earliest Batman exposures being a Power Record with Man-Bat. Aside from a period in the late '80s when the likes of "Year One" and The Dark Knight Returns reigned over all, into the early '90s as Batman Returns faded into Batman Forever, I've tended to prefer the Man of Steel to the Caped Crusader. Superman's cartoon was funner and more action-oriented, so I didn't mind as much that they ran a ton of repeats, especially since there were fewer episodes produced anyway. Regardless, I drifted away after a couple seasons. Naturally, the next series was Wonder Woman: The Animated Series, but ha-ha girls stink go cry in your pillow fanboy. I'm writing this in the year 2022, and this world still hates women so much that the third leg of the supposed DC Trinity has never had her own cartoon series. Instead we jumped to Justice League, of which one of my best friends' girlfriends taped a few episodes off Cartoon Network for my broke ass, and I have still never seen broad swaths off. Instead, just as JLA was revitalizing DC fandom, a quasi-Timmverse series joined The Batman (and Robin) Adventures and Superman Adventures, this time "manifesting" a cartoon for DC instead of merely adapting...
Posted by Diabolu Frank at 12:00 AM

Please tell me that you saw the 2 part Justice League episode where they go back to WWII and face off Vandal Savage.

I believe that I did once, but it's been a while. The one with the JSA analogs?