The JLA have been graphically executed by the forces of Apokolips; the Flash's severed and bleeding legs particularly unsettling. "...the Martian Manhunter roasted alive" as Darkseid burns an American flag. Aztek explained what he would do in this situation, earning Green Lantern Kyle Rayner's approval at his handling of the three dimensional virtual simulacrum. "They're mentally-programmed by the Martian Manhunter... which is kind of freaky when you think how disturbing they are. I mean, he seems such a regular guy."

After the JLA title unexpectedly took off like a rocket, new readers flocked to the first new story after retailers started catching up with demand, #5, a one-off about a team recruitment drive. With both books sharing a writer, Aztek benefited from a creative overlap with a second lease on life after a critically regarded but commercially rejected title. To strengthen the connection, a rapidly ailing Professor Ivo, denied his immortality serum in prison, was brought to Dr. Curtis Falconer's hospital in the city of Vanity. Little of this was actually communicated to new readers, unfortunately, but context clues and modern wikis. Years into a lethal dispute, Ivo's Amazo android used the powers of the original Justice League to trap the JLA on the moon for a reckoning with his creator.

Prior, the Martian Manhunter chastised Flash and Green Lantern for bickering, and extended apologies for the absences of Superman and Batman. "As chairman of the new Justice League, it's therefore down to me to open the proceedings." Aztek's candidacy for membership was considered before Amazo's intrusion, and we would soon see the Falconer's "Ultimate Man" alter ego take a beating from the android. Relatively quickly, Wonder Woman realized that the Green Lantern energy bubble trapping the team might be vulnerable to the color yellow, as it was derived from Hal Jordan's power ring. Wrapping the Lasso of Truth around one hand, the Amazing Amazon shattered the energy sphere with a punch. The JLA made haste to Vanity, but when confronted, Amazo produced vials of the immortality solution. The game wouldn't be the same for Amazo if Ivo were allowed to pass. 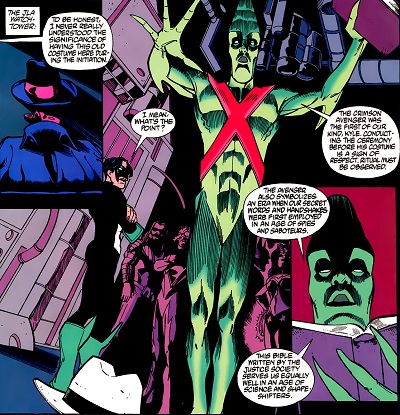 Following several pages teasing aborted plotlines for the series, we returned to the JLA Watchtower, where Kyle questioned the rite being performed in the meeting room by a natural form Martian. "The Crimson Avenger was the first of our kind, Kyle. Conducting the ceremony before his costume is a sign of respect. Ritual must be observed. The Avenger also symbolizes an era when our secret words and handshakes were first employed in an age of spies and saboteurs. The bible written by the Justice Society serves us equally well in an age of science and shape-shifters." The candidate, Aztek, stated that he was ready. Batman and Superman made a one-panel cameo.

"A League of Their Own" was by Grant Morrison & Mark Millar, N. Steven Harris & Keith Champagne. I believe that this was the first book to slap the new JLA logo on a cover to boost sales, and though the print runs on this title were already abysmal, I bet the sell-through and reorders raised eyebrows. I know I pre-ordered mine on the strength of that gorgeous Steve Lightle cover, and I used a similar crop as that at the top of the post on my late '90s WebTV page. Getting into the interiors? Even post-bust, most DC titles could manage to get past their first year, so there were clearly problems here. The art simply wasn't up to major company standards at a time when stronger talents were hustling to find work, and the drab coloring did no favors. Morrison seemed to still be stuck in a Vertigo mindset attempting to create a stillborn "icon" for the DC pantheon, and this non-starter had to contribute to his protégée's eventual turn toward shock over awe. I know they did a collection a few years ago on the strength of the writers reputations, but I doubt there was any great groundswell around memorializing this project.

I gotta tell you , you are right about the JLA logo that is the only reason I bought this book & I thought the ceremony was the best part of the book. BTW was that the only time Amazo looked like that ?

More like the last time Amazo looked like that, as the short-lived "kewl skul" version was from the "All-New Conglomerate" story in Justice League Quarterly #12.