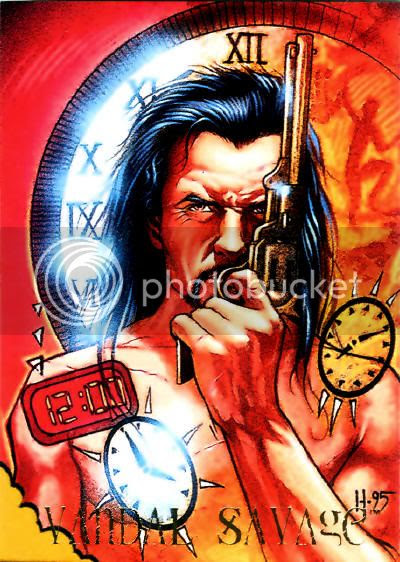 Looking through my "Dark Judgment" set for Martian Manhunter related villains to hold space while I deal with other matters, I'm struck by how many talented painters were tasked with immortalizing so many negligible characters.

This was a 90-card set, designed so each artist would get their own nine panel grid if displayed in standard binder pages. Thom Ang took the first round, and got off reasonably well with several recognizable C-listers, but who the hell is "Scarth?" Seriously. The set was loosely tied into the comic book event Underworld Unleashed, and the card backs featured commentary from its big bad Neron and a hidden message. This was in lieu of actual information, like who "Mr. Scarth" fought, what his powers were, and in what comics he appeared. Even as a devout DC collector in the 1990s, including all the Underworld Unleashed mini-series and one-shots, I don't know what a scarth is.

Alexander Gregory took page deux, and though he's an unfamiliar name, he did swell work on major villains. Just look at his Black Manta. Sure, he also did the second Ravager, but I'm a Titans fan, so I knew what's what.

Mark Chiarello is a pimp, even when handling Catwoman foe Hellhound and "Brainiac 3" Lyrl Dox. That last one should be familiar to R.E.B.E.L.S. readers, and speaking of pimping, you guys need to read the original series if you haven't already.

Simon Bisley divides up art fans, but he brought his fully painted A-game to some A & B-listers... as well as the recently deceased Superboy frienemy Knockout and White Lotus, who I in no way recognize. Little help?

Two-thirds of the next page was by the incomparable Bill Sienkiewicz, getting stuck with such lame-os as Superboy (him again) foil King Shark and Fate femme fatale Charnelle. Three other artists get better characters, two of which resulted in lousy CGI atrocities.

Page the sixth belonged to the moody Scott Hampton, offering mostly decent 90s creations. The Titans family inflicted another "prize" with Crimelord though.

Kent Williams went cheap with rough art school castoffs, doing crumby work on generally solid mystical menaces. Once again, Fate drops a big load of Kingdom on the dining room table, while the short-lived Manhunter provided a new Wild Huntsman, and Dementor escaped from Guy Gardner: Warrior. I could make Vile Corpus posts for two other characters on this page, but I'm too tired to deal with the Demon Etrigan or Silver Banshee's anemic credentials tonight.

The real winner of the set is Tony Harris' uniformly fantastic contributions. I ran his weird but cool Lord Havok the other day, and when have you ever seen Vandal Savage rendered as well as the above piece? I just wish I could argue for posting more of these. Death Masque was the Ray's nemesis, and few would recognize Damage's revamp of an old All-Star Squadron Nazi as simply "The Baron."

Joe Devito finished out the set with some of its most commercially friendly work. It's also the closest thing to a Martian Manhunter-themed page, with no less than four Vile Menagerie entries or candidates. More on them tomorrow...
Posted by Diabolu Frank at 10:48 PM

I think my cousin came down with a case of scarth once. He had to take these big pills and drink lots of water.

I have never seen these cards before, but they remind me in their layout of the nine-tych style of the 4th edition of the Marvel Universe cards. Those did not have nearly as good art, although they did share the dearth of information that these have.

While I sort of like it (I used to collect the Xmen cards), I also don't feel this style that was popular on 90's trading cards works that best for superhero comics. Story and Robinson hatred aside, Cry for Justice suffers from this. It's too static and too, oily. The characters don't seem as real as say, George Perez, or say Alan Davis. Less personality maybe?

Oh no, I'd agree that painted art should be reserved for static images, like cards and covers. With rare exception, the technique sucks all the energy right out of super-hero comics.