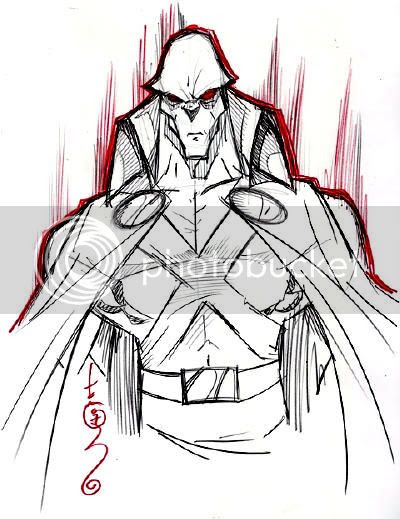 So the plan on Saturday was to offer the "Previously in Jemm..." temporary post, followed by a new story synopsis. Well, Saturday never happened, but I was productive on Sunday. However, an ongoing glitch at Blogger prevented me from posting or commenting on anything that day, on through to Monday morning. I got really frustrated when I saw other folks posting, but I guess those were previously scheduled, or maybe the problem was regional. I was comforted to find Snell was similarly afflicted.

Instead of writing story-related posts, I worked up cover countdowns (when Comicvine wasn't also glitching out) and linklists. Plus, tonight my imaging computer is on the fritz. I can't catch a break, I tell ya. Once again, we'll run some filler catch-up, and then start bringing the goods. I've been pretty lax here lately, so I promise to bring up my game.

Anywho, here's a pin-up by Tom Hodge, which kind of recalls Craig Rousseau, which is a good thing.
Posted by Diabolu Frank at 11:23 PM

Yeah, I dig this. I prefer the friendlier Manhunter of Maguire or Gleason, but I don't mind the more angular tough guy of JLTF or JLU one little bit.