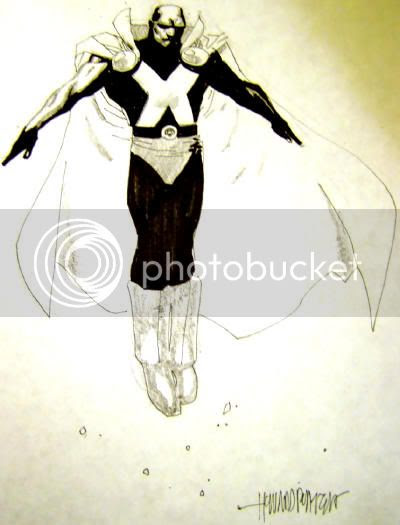 Howard Porter had a great deal to do with the popularity J'Onn J'Onzz has enjoyed since 1996. Porter was often criticized for going well off model from the good looks of DC's style guides when it came to more iconic heroes. Martian Manhunter was both a relief and an opportunity to the artist, since Porter could do whatever he liked within reason, and become identified with the character. I'm not a big fan of DC's recycling of across chest straps on so many of their heroes, but Porter uses them well here as a standout symbol amidst an Alien Atlas largely in silhouette. J'Onzz is unusually graceful, but still "off" enough to maintain his extraterrestrial air. I like the Kirby bigness of everything, completely unrealistic but amusingly bombastic. The Adam Hughes puffy boots are a nice touch.
Posted by Diabolu Frank at 5:23 PM

This is a very interesting image, and it shows one of the many ways that artists can draw J'Onn. Heck, you could easily have J'Onn look different in every panel -- he is a shapeshifter after all. (He probably would not do it as it might unnerve some of his colleagues.)

I've always liked his take, even though I'm not a fan of the popped collar.

Exactly. Porter's a guy I really like on the right book, and he's got a knack for the Martian Manhunter, but he's directly responsible for the chach collar others have adopted.

I love Porter and his work with Morrison on JLA.

You know, I really didn't like him on Titans (although I was on my way out of that book anyway) but loved him on Magog. And now I dislike him on on Doc Savage (which despite loving the man of bronze, I'm not picking up.)

M.C., I never made it past Winick's name on the cover of Titans, and that title has been a brand name for garbage for fifteen years now. I liked Porter on The Ray and The Flash, which might as well have been two different artists. Underworld Unleashed was good, too. Shame he never got to do Kyle Rayner in a solo series.