I do not now and have not ever owned The Brave and The Bold #50, the first "team-up" story of the series, published in late 1963. It's relatively inexpensive and attainable in lower grades, but I've never bought it. Instead, a stream of reprints have passed through my hands, beginning with one in the same title eleven years and sixty-four issues later. It was given to me, along with a good deal of my Bronze Age Manhunter from Mars books, by a very friendly customer of mine from the comic shop days in the late '90s/early '00s. When I started my old, defunct WebTV site Martian Manhunter: The Rock of the JLA, my Silver Age coverage tended to be short, flip, and often condescending. "Wanted-- The Capsule Master" was one of the few stories from that period I wrote about at length and with the more dry, informative tone used for synopses here at The Idol-Head of Diabolu. 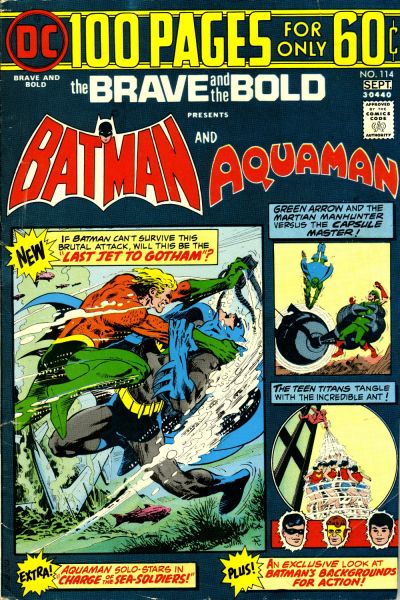 The Brave and The Bold #114 was one of those chunky, 100 page throwbacks to the Golden Age DC attempted before their implosion in the '70s. The lead story was by Bob Haney, who also penned "Capsule Master," and paired Batman with Aquaman. The art was by a favorite of mine familiar with both characters, Jim Aparo, but I've never gotten around to reading it. This was followed by a reprint of Teen Titans #5, yet again by Haney, also unread. A goofy rebus was snuck onto the bottom half of the last page to cover space presumably once occupied by a little ad. Aquaman of all people then narrated three pages of "Batman's Backgrounds for Action," clipping art from various comics in which the Caped Crusader found himself in unusual environments.

Finally, the Green Arrow/Manhunter from Mars reprint began. There were subtle differences between the two editions, though. In place of a bold text "THE BRAVE AND THE BOLD" and old style DC Bullets that ran atop each story page in #50, the book's title shared opposing space with an even bigger, bolder "GREEN ARROW AND J'ONN J'ONZZ" instead. On the splash, this was replaced by a "scroll" banner which read "Presenting: The Very First Brave & Bold Team-up:," complete with the original TB&TB logo. Creator credits were added in #114. The color boxes behind each character's name had been removed, and the yellow "Chapter 1" caption had been recolored pink. The original story also featured an additional splash page of the heroes with Johnny DC, announcing the then-new team-up format. 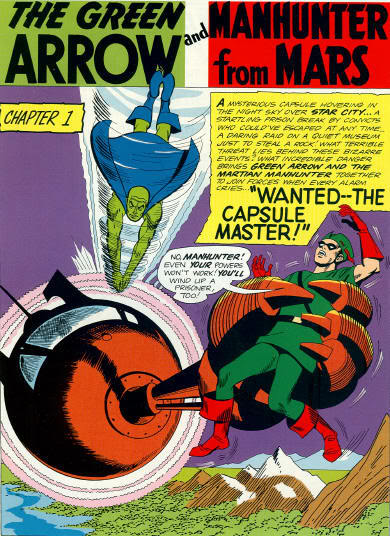 The reprint pages were recolored, presumably from reproduction off file film. Purple skies became dark blue, or in one case yellow, to reflect a lighting mistake missed the first time (and replicated in all other, more exact reprints.) Background colors were made more "realistic," and hence drab, compared to the primaries used in #50. At the end of the first chapter, a half-page ad for House of Secrets and Weird War Tales substituted for Tootsie Roll.

During the first year of this blog, I briefly got ahold of a copy of the 2005 TB&TB Team-Up Archive Edition, and scanned a number of images to offer the best quality pictures for our coverage of "Capsule-Master." I figured to then re-read my copy of #114, make any alterations to the Rock of the JLA text needed, and get that bad boy posted. Imagine my surprise when I discovered that early into the second chapter of the story, #114 had made alterations of its own, deleting a full page and a single panel.

In the original story, the last panel on page ten saw Martian Manhunter flying through space via a teleportational beam. Page eleven saw J'Onn J'Onzz meeting with the All-Martian Council about Vulko and his mission. The page ended with a panel of Green Arrow and Speedy in Star City, searching for Vulko, and wondering after Manhunter. 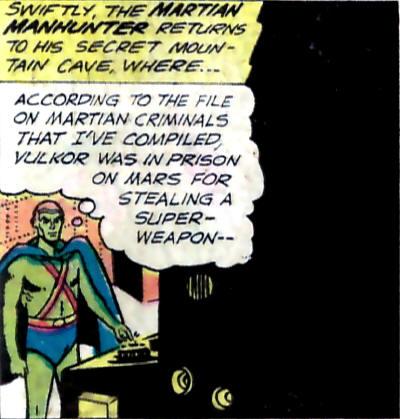 In #114, the next-to-last panel was altered to extend its right boundary with black space, and J'onn J'onzz's thought balloon was altered to read "According to the file on Martian criminals that I've compiled, Vulkor was in prison on Mars for stealing a super-weapon--" An entirely different panel closed the page, of Martian Manhunter looking at something that only vaguely resembled a computer console, continuing his thought, "--which was destroyed in the fight when he was captured!"

I don't know why the page was excised, but given how many silly extras were thrown into those 100 Page Giants, I doubt it was an issue of space. More likely, there was some problem with the film file, and a new panel was either drawn or swiped from someplace. The art doesn't look like Joe Certa, but maybe Dick Dillin? Anyway, it made for a brusque mise-en-scène transition to the Arrowcar on page 12, which was of course sequentially renumbered.

From there, the differences were fairly minor, usually with occasional background or detail color left out. A pink sky turned blue when the capsule struck high tension wire. The details of Vulkor's costume were colored in on that same page, where the first colorist emphasized the nighttime setting by making him monochromatic azure. Martian Manhunter and Green Arrow were treated the same way in that sequence. Throughout the reprint, Vulkor's helmet was colored silver instead of purple. 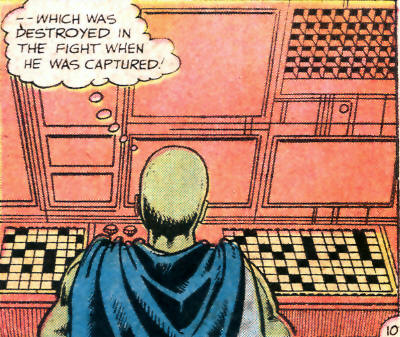 Other Tootsie Pop and Tootsie Roll Fudge ads peppered #50. They were substituted by Batman and Robin on one page, and for figures from Action Comics #438 (specifically the Atom and Superman wrestling a hulking Lois Lane) on another. The final panel of the reprint was extended through the combination of expanding the distance between a flying Manhunter and his partners, as well as adding to the solid black ground on which Green Arrow and Speedy stood. These alterations replaced the caption "And you readers are lucky to have both champions fight evildoers: Green Arrow in World's Finest Comics, Martian Manhunter in Detective, and both together with the Justice League of America." An Aquaman reprint from Adventure Comics #284, credited only to Jim Mooney but written by Jack Miller, closed out the book.

Sadly, I had not caught the omission until after the Archive Edition left my hands, and I refused to publish the synopsis as presented in #114 for the last couple of years. The write-up simply sat in my lengthy queue all this time, until I found myself desperate for something to publish while I was out of the country. In the meantime, scans of #50 passed my way, but I didn't care to rely on substandard jpegs when I knew I could eventually scam my way back to the Archive. Also, I intended to time the publication to coincide with my sequential coverage of Justice League of America. Again, in the very first year of this blog, I wrote synopsizes through to issue #36 based on the first two black and white Showcase Presents volumes. I refused to post black and white scans, so I blew up and digitally colored panels from several issues. This proved very time consuming, so I set that coverage aside. The computer drive holding the word documents crashed, and after a year of sifting through the debris extracted from that failed drive, I've yet to recover those synopses. I've felt like Vern Tessio digging under the porch for his jar of pennies ever since.
Posted by Diabolu Frank at 7:02 PM