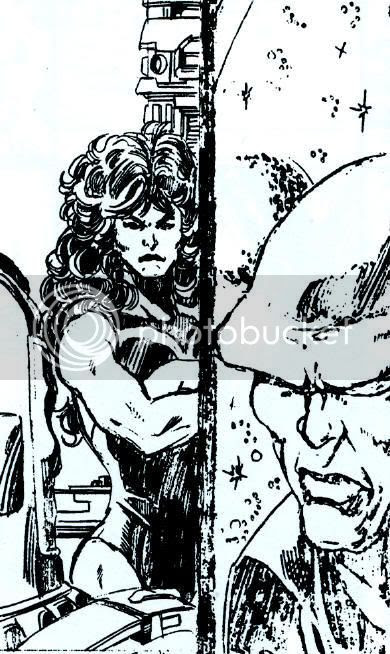 Scriptnotes is a podcast where "Screenwriters John August and Craig Mazin discuss screenwriting and related topics in the film and television industry, everything from getting stuff written to the vagaries of copyright and work-for-hire law." The latest episode is already internet infamous, as it featured guests Andrea Berloff, Christopher Markus, Stephen McFeely, and most infuriatingly, David S. Goyer. Andrea Berloff is writing the latest screen treatment of Conan, relying most heavily on servicing fans of the Arnold Schwarzenegger flicks. Technically, Conan is a pulp character who was adapted to comics decades after his creation, and Berloff doesn't seem to have much of a grasp on comics. When asked how she would reboot a Wonder Woman movie (as if there's been one yet,) she mentioned using a mother character and involving Amazon sisters, as if that wasn't the plot of every Wonder Woman story from 1946-1967, and every other one from 1975-1986. Also, she thought the Amazons should operate in the Amazon Rain Forest. The team of Markus & McFeely have written all of the major Captain America and Narnia motion pictures to date, were the most knowledgeable/insightful in their discussion, and were the only ones capable of humor that wasn't wince-inducingly painful. Their offering to reboot Spider-Man wasn't very interesting, but a positive nod to Miles Morales never hurts.

And then came Goyer, writer of the first Crow sequel, the Nick Fury: Agent of Shield telefilm with David Hasselhoff, all three Blade movies, the Ghost Rider sequel, Man of Steel and co-writer of the Christopher Nolan Batman films. Much hash has been made of his coarse remarks, but I'm in the undesirable position of offering the modest defense that if you listen to the actual audio, it doesn't sound as bad as it does in black and white print. Beginning at the 20:21 mark, Goyer discusses how it was a bit less of a headache to write four DC movies before Warner Brothers started demanding more Marvel style interconnected continuity. He's written Batman v Superman: Dawn of Justice and at least worked on Justice League, but he had to be very careful not to talk about them explicitly. He was gracious about how well Marvel Studios had done rolling out their franchises, and noted how Marvel Comics were known for the realism, but until The Winter Soldier made less realistic movies than DC (presumable post-Schumacher.) He alluded to using a different interpretation of Batman for the new shared universe movies rather than the take he co-wrote with the Nolans. 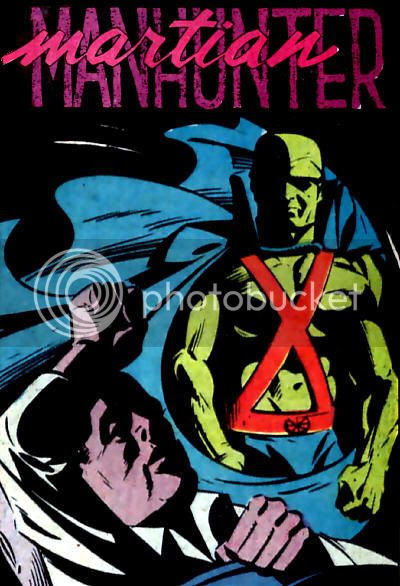 Things didn't get weird until someone pulled the "boot" for She-Hulk, so Goyer and Craig Mazin (writer of two Hangover sequels, two Scary Movie sequels, and Identity Thief) went off on the "chunky" "Slut-Hulk" supposedly created as a sexual fantasy for Hulk fans to vent into. I'm sure the aim was for ribald humor and not gross misogyny, but even the host was skeeved out and threw a shame blanket over the conversation. After a decent Storm reboot pitch from John August, Goyer made this post relevant to the blog by having to envision the cinematic transition of the Manhunter from Mars. Goyer would not confirm or deny if that had already happened in his currently filming scripts, though he was referred to as a "mainstay of the Justice League." One host (August?) called J'Onn J'Onzz "challenging" while another (Mazin?) kept chanting "overpowered" over other people trying to talk. Goyer asked the studio audience if they'd heard of Martian Manhunter, and when he was met with applause asked how many of them had ever gotten laid. Goyer continued...

A host asked sarcastically if there was another one of those in the DC Universe.

"He came out in the ’50s, and he had basically all the powers of Superman, except he... didn’t like fire, and he could read your mind... So here’s the best part... So he comes down to Earth and decides, unlike Superman who already exists in the... world now, that he’s just going to be a homicide detective, and pretend to be a human homicide guy... He can change his shape... So instead... of using super-powers and mind-reading and like, 'Oh, I could figure out if the President’s lying or, y'know, whatever,' he just decides to disguise himself as a human homicide detective. Dare to dream."

A host referred to that as "pretty dismal."

"...I would set it up like The Day After Tomorrow. We discover one of those Earth-like planets... We get the DNA code from that planet and then grow him in a petri dish here... He’s like in Area 51 or something and we’re just... doing biopsies on him. Then he gets out and he’s really angry... and then he f***s She-Hulk."

...Because only green people can sleep with other green people, no matter how far we've progressed as a society, as they say. Also, there's a Lex Luthor reboot, and then a lengthy critique of the work of three prospective screenwriters. So, there's that. Leave your own comments and I'll get back to this with my own thoughts tomorrow. You can listen for yourself here.
Posted by Diabolu Frank at 3:30 AM

Goyer and Mazin come off as the trench coat mafia that never got to sit at the Cool Kids table suddenly grown up and given access to sex, drugs, and stardom. They're joking to be mean, not witty or insightful or even self-deprecating. Just joking to be mean.

I can find humor in viscousness, but the truth is that nobody found them funny, and they bit into their bitter material like rabid pitbulls. What's most remarkable is how stupid they were not to realize how far off the beaten path they'd swerved. Besides quitting while they were behind, they should have sprinkled mea culpas into the podcast. Far too late now, barring suddenly going to work for a bettered women's shelter or something.

Someone on Reddit, I think, made an insightful comment about the She-Hulk bit--basically, "What does this mean for Wonder Woman's treatment in Superman v. Batman?" I don't have an answer to that, but I thought it was something of note.

The "humor" didn't bother me as much as Goyer's interpretation of J'onn being so far afield. Because a Martian running around mind-wiping a President is not only implausible (J'onn wouldn't last long in the real world if he did that) but goes against his moral code...which was pretty clearly and efficently established in a cartoon no less. One can consider the source material "goofy" and then go about changing it and shoehorning your own vision into the source material. Or you could try to stay true to the source material and write a good story out of that. I guess maybe that's the Marvel/DC difference, because as someone on Twitter posted, there's a Marvel movie coming out with a gun-toting raccoon and that's not too goofy enough to be plausible. (And profitable.) Geez, even Smallville got the Martian Manhunter right compared to this, and the CW isn't some Mystical Oracle of Storytelling.

What I don't get is the need to berate both the fans and source material. How is that logical? Or productive? Even if someone put me in charge of making a movie about my least favorite superhero, I still wouldn't go around dumping on fans of that character--because what does that accomplish? I mean, this isn't rocket science: find out the core of a character, get the writers and actors to understand it, change whatever unnecessary details you need to to make it contemporary, and there you go: a successful movie. If Ant-Man can get a solo film, then there's no reason why J'onn can't. I know it's not going to happen, because someone at DC must really hate him, but Goyer needs to realize that these are movies about comic book characters, and nothing is impossible if you have vision.

We've reached the point of being nostalgic for Smallville and its displays of minimal competence interpreting DC heroes. There's true shame in that.

I had hopes Warner would become more like Marvel Studios, but reports over the weekend suggest the opposite flow of influence. Well, I was looking forward to Ant-Man despite not caring for that character, but now I worry that the Age of Ultron may be the last hurrah of the good times.

Along those lines, I don't claim to be any great shakes as a writer, but when I encounter a hero that I can't stand, I treat it as an exercise. I'll let a sleaze like Cyclops marinate in my mind, figuring out what people like about the character, and what value they add to the greater narrative. I have yet to try this with a character where I didn't come away seeing positive possibilities that stay true to the character...

...although Red Tornado would be required to be destroyed. But all to the good, I assure you.