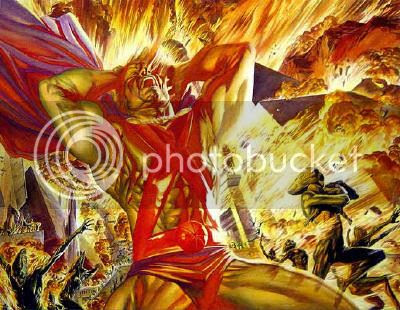 411mania offers the following ranking/testimonial for the Alien Atlas...

Not a lot of people like Martian Manhunter. Not a lot of people understand Martian Manhunter. The big problem is that, when superheroes hit their boom period many years ago, J'onn J'onzz was barely seen anywhere, so he was never someone that a major generation of comic book fans even drifted to. This meant that the times that they tried to push J'onn, the books never sold very well (plus the fact that I dare you to name one awesome villain that is attached to J'onn). Much like Superman, he lost his entire family and species and ended up an alien on earth, where not everyone will accept him. Also, like Superman, J'onn is pretty damn near indestructible with a strong moral code. J'onn is also a shape shifter and mind reader with an insane fear of fire. While he isn't a great solo character, he might be one of the best Justice League members because his losses make him someone they can trust to protect them at all costs. Plus, he is a great detective – up there with Batman – and I love good detective superheroes.”

Thanks to Boosterrific for tweeting this link!
Posted by Diabolu Frank at 4:16 AM

If "not a lot of people like" number 13, number 50 must be about as popular as Pink Slime. (Poor Plastic Man!)

This is a good summary for those many who do no like/understand the Martian Manhunter. I'm glad a line about his moral code made it in there, too.

Somehow, the number 13 seems fitting for him.

I've devoted years of my life to a blog about the Martian Manhunter, and even I'd put the breaks on ranking Plastic Man a notch behind him, much less dozens of them.

Even Adam Strange out-ranked Plastic Man. Yikes, that is strange...