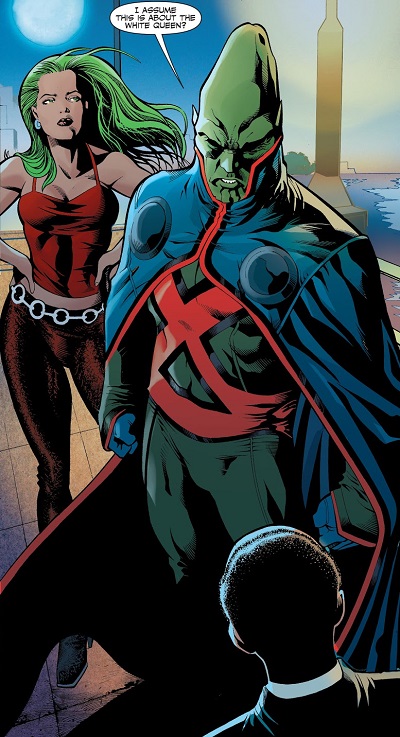 The Amazons of Themyscira, who had faced annihilation from an army of OMACs in Infinite Crisis, threatened others with annihilation ahead of Final Crisis. J'Onn served as a glorified cell phone in a few panels of the Amazons Attack mini-series by Will Pfeifer & Pete Woods. At least for his cameo in Catwoman #70 by Will Pfeifer, David & Alvaro Lopez, J'Onn was dispatched to stop an Amazonian terrorist captured by Selina Kyle from killing herself before information could be extracted from her. The appearance was likely intended to foreshadow his and Catwoman's joining a new team of Outsiders, but then those plans were scrapped so late that house ads featuring the two of them on the team were already running, and completed issues of the series were never printed. Replacement issues were rapidly commissioned and replacement team members were rapidly inserted.

In the Checkmate series that spun out of Infinite Crisis, it was revealed that the Manhunter was often impersonating Black King Taleb Beni Khalid to lure White Queen Amanda Waller into a trap. The Wall had continued to act primarily in the interests of the U.S. Government in direct opposition to her oaths to the United Nations organization, and had also violated a rule governing the number of metahumans allowed in the operation by injecting OMAC nanites into her bloodstream. Where Waller had thought the Manhunter impersonations would drive out the Black King, they instead placed her in a position to have a resignation extorted out of her. The Manhunter also helped in the investigation of her Salvation Run project, in which Task Force X was illegally capturing and deporting super-humans to a hostile alien world. In Countdown, the Manhunter was show attending the funeral of Bart Allen, who had been temporarily aged to adulthood to assume the role of The Flash, only to be murdered by a prior incarnation's Rogues. In the Green Arrow/Black Canary Wedding Special, he claimed to have seen this outcome from the moment they met, and was in attendance for their nuptials. This was followed by the Justice League of America Wedding Special #1. 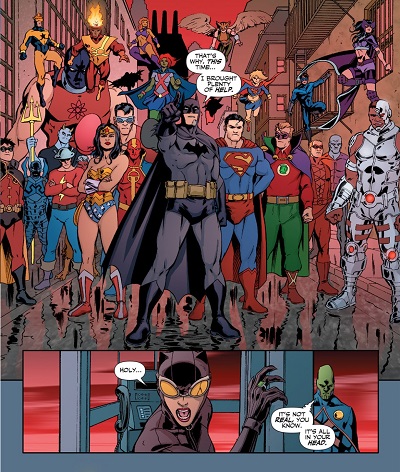 The Alien Atlas participated in the Sinestro Corps War, and was seen punching a robot from the Manhunter Corps. He also joined a host of heroes in a rematch against Superboy-Prime after his spree killing of heroes in Infinite Crisis. The Martian Marvel was one of the main point men in the struggle, and detected that Prime was not yet at full strength after escaping confinement on Oa. It was during the Sinestro conflict that a then unknown entity caused the first member of a new undead Black Lantern Corps to rise from the remains of the Anti-Monitor. [Tales of the Sinestro Corps: Superman Prime] Miss Martian had also fought Sinestro's Corps, while J'Onn J'Onzz turned up in her book for a few issues of Teen Titans [#50-51.] He had been investigating a murder in Vancouver when he was ambushed by evil Titans from the future, and joined several other powerful Titans mentors in temporary imprisonment. In another rematch involving the center of a recent super-hero massacre, Martian Manhunter and many other champions made sporadic appearances in the mini-series Black Adam: The Dark Age by Peter J. Tomasi, Doug Mahnke & Christian Alamy.

Back in Countdown, some alternate universe version of Superman broke the neck of some multiversal Martian Manhunter. He helped fight some rogue Kryptonians in Action Comics Annual #11.

In Catwoman #75-77 by Will Pfeifer, David & Alvaro Lopez, we see the titular star sent to the ironically dubbed Salvation planet via Boom Tube alongside fellow villains Deadshot, Bane, Lex Luthor, Blockbuster, and Chemo. Cheetah was already there, nursing a grudge against Catwoman and intent on lethal payback with no one to stop her. Then Blockbuster punched Cheetah out cold. Catwoman was recruited by Luthor for a perilous mission alongside Cheetah, things go awry, and eventually Martian Manhunter appeared to warn Selina that things were not as they appeared. J'Onzz was silenced by explosive fire from an assault helicopter, and Catwoman became lost in her increasingly incredulous misadventure. Finally, wielding a Green Lantern ring against a host of DC heroes, Catwoman was again visited by the Sleuth from Outer Space. Selina had never left a computer room underneath the prison planet, slowly dying as a machine fed scenarios into her mind to keep her from acting to truly save herself. There were no external controls, so Luthor couldn't have saved her if he wanted to. The only way out was from inside, and J'Onzz guided Catwoman through willing herself loose. Their story would continue in Salvation Run...
Posted by Diabolu Frank at 11:42 PM