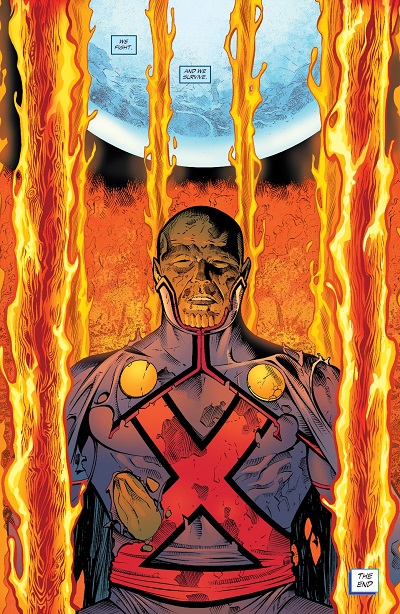 Two more weeks on Hell Planet. Despite the narrow bloodless victory last issue, Martian Manhunter was now depicted as brutalized and dirty with missing teeth in a flame cage constructed and maintained this entire time by a Heat Wave who has gone from fear at being blamed for his death to anticipation for murdering him. Except when he joins Captain Cold in pointing out that killing Bart Allen was the worst mistake the Rogues ever made and led to their dire straits. But ask again in five minutes. The Joker & Luthor camps also reunited, because. The Titans associates Thunder & Lighting tried to rescue J'Onn, but got captured by Bane and imprisoned. Luthor and Joker fought over whether to kill the lot of them, and then they just plain fistfought, and then the Parademons show up.

Vandal Savage continued to mentally abuse and sleep deprive his would-be villainess harem, tricking each in turn to think that they were his sole partner in manipulating the other, with Phobia's literal fearmongering amongst them going a long way toward explaining why they would be so malleable. Eventually, they bothered to talk amongst themselves, figure out his scam, and throw a beating. Luthor needed a safe place for Warp to teleport the device his team had constructed to return to Earth, and Catwoman guided them to the safe zone, where they halted the savaging of Vandal. Grodd reminded everyone why he was called Super-Gorilla by surviving the attempt on his life and working with Luthor to telepathically force help with opening a portal from unwilling parties. Grodd wanted to kill Joker, of course, but then the Parademons showed up again.

Even this late in the game, previously unseen key players were being introduced without explanation. Super-villains apparently killed in the ensuing battle are included and struck out in the final census below (though some will turn up elsewhere in the future, also without explanation.) Thunder, Lightning, Warp, Neutron, Plasmus, and, um, Lady Robot Arms(? I hope it's not Silver Swan. That would be embarrassing) were revealed to be powering the portal, and were all blown to pieces by a bomb left by Luthor before he was the last man through the portal. Weak and in great pain, Martian Manhunter was ignored by the Parademons and left to die in the flame cage (maintained by what exactly?)

"Burning Down the House World" & "We Gotta Get Out Of This Place Planet" were by Matthew Sturges, Sean Chen and Walden Wong, again, but for the last time, and joined by Wayne Faucher. I can't stand the Joker and can't believe he'd win a fight against Lex Luthor, but these issues were less terrible (and less substantial) than the rest. But why again didn't anybody kill the Joker after they got back home?

I remember Salvation Run. I wish I didn't.