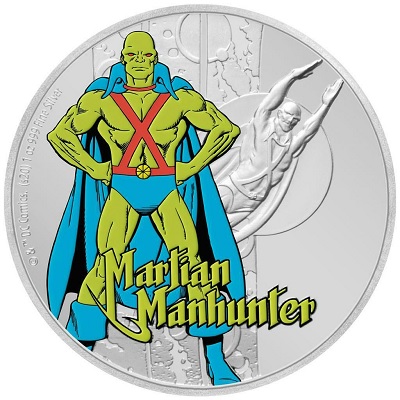 This coin features a glorious green image of MARTIAN MANHUNTER alongside his logo. Additional engraving in the background, showing him in flight,completes the lively design. As a legal tender coin,the obverse features the Ian Rank-Broadley effigy of Her Majesty Queen Elizabeth II and the year 2020-60 years exactly since the formation of the Justice League.

Key Selling Points:
Sixth release in the officially licensed JUSTICE LEAGUE 1oz Silver Coin Collection.
Celebrates the 60th anniversary of the original super hero team.
Features two images of MARTIAN MANHUNTERTM. In the forefront he is shown in colour with his logo and, in the background, engraved in flight.
Acrylic coin case allows easy access and display-arrives inside a complementary box.
Limited mintage of 1,960 for each coin reflects the year the JUSTICE LEAGUE was created.
Ideal for any collector, especially one of DC Comic memorabilia.

I got excited for a minute when I thought I'd missed a sixtieth anniversary coin for the Manhunter from Mars from six years ago. Read the fine print, and it's from last year, in celebration of the JLA's anniversary. On the one hand, DC really should do a better job of celebrating the world's greatest super-heroes as a team, given that most of us are quizzical over that Green Arrow 80th anniversary special when the dude hasn't supported an ongoing in a few years. On the other hand, J'Onn J'Onzz's entire existence continues to be bound up in the group he co-founded. Admittedly, as a solo character, he would rate neither a coin nor a special on his own, so I should be happy that he'll always be a Beatle, even if only Pete Best.
Posted by Diabolu Frank at 5:10 AM

That's awesome looking & btw Pete Best is better than nothing.

Thanks for the comments, Kevin!