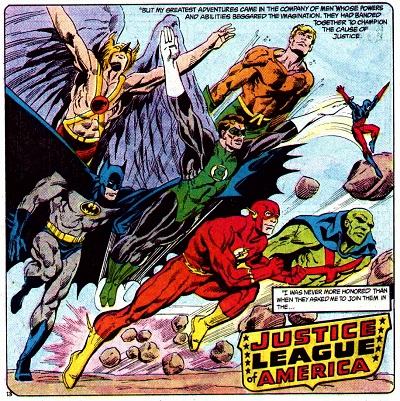 People forget that the impact of momentous events is not felt universally nor instantaneously. DC Comics' super-hero publishing from December 19, 1985 until August 31, 2011 is referred to as "Post-Crisis," theoretically a closed expanse of in-universe continuity. You would then assume that everything DC put out in 1986 would be "Post-Crisis," and if you mean "published after Crisis on Infinite Earths #12," you'd be right. But see, "Whatever Happened to the Man of Tomorrow?" wasn't out until June of that year. The supposed "New Adventures" of Batman began with a Legends tie-in that August. Wonder Woman was a mound of clay until her book relaunched in November. Wally West may have taken on the mantle of Flash during Crisis, but his solo book kept until March of 1987. Supposedly everyone was starting off more or less from scratch, but Green Lantern and Aquaman have arguably never had a proper reboot. Whether or not "Aquababy" is still in canon today, the Sea King picked up roughly where Brightest Day left him in 2011 as the "New 52" continuity was ushered in. Hell, DC was coy about whether the "New 52" launching after the Flashpoint event series was a line wide reboot, and in retrospect it's pretty clear that DC editorial hadn't fully committed to that as the titles were coming out. I mention all this because my recent revival of the Power of the Atom Podcast, fueled by early April Fool's Day pranking and my guest appearance on Justice League International: Bwah-Ha-Ha Podcast, meant revisiting Secret Origins #29 for a second time in audio format. John Byrne and George Pérez had committed to full reboots of Superman and Wonder Woman that did not include their ever having been members of the Justice League of America. Batman's membership was firm, but not his foundership. Their single panel appearance in this Atom origin story includes Hawkman, who notoriously had his ground zero reboot in mid-1990, almost five full years after Crisis and including his own solo ongoing series and a slew of guest appearances. Suddenly, a character presented here as a co-founder had never even been a member. They had to create Thanagarian spies who had been members of the Post-Crisis Justice League international, who were emulating the Golden Age Hawkman Carter Hall, who years later would get retconned into an early Justice League member himself. It was quite a mess. A few months later, a different issue of Secret Origins finally determined that the founding members were Flash, Green Lantern, Aquaman, Martian Manhunter, and Black Canary, the latter not having joined the League until the seventy-fifth issue roughly a decade into the property's life. And technically, that was the mother of the character depicted in Secret Origins. From the very beginning, Wonder Woman was in that very first League story from 1960(ish,) part of the cover-featured quintet. It's more than a little off to see the sausage factory heptad depicted here, and presumably only here. We saw a variety of permutations of the founders before and even after Secret Origins #32, but Dinah Lance was pretty much a staple from 1988 until the New 52 (though things got fuzzy after Infinite Crisis. Another constant? Martian Manhunter. Unlike pretty much any other hero picture, nobody cared enough to make spurious claims about J'onn J'onzz's status as a League founder. He just wasn't that popular, and his continuity didn't pose serious problems, plus his status had been romanticized by "lost" stories featuring this M.I.A. member in the 1970s. If anybody could confidently be named a founder, it was the Alien Atlas, and this morphed over years into his being the most resolute and reliable member. Yeah, in the actual publishing, he was gone from the late '60s until the mid '80s. In the Post-Crisis canon though, he became "the" Leaguer, who never left in this continuity, and that construct did as much to elevate the Martian Manhunter within the universe and outside media like cartoons and movies as anything else done with the character. Throwaway images like this helped to build the Martian Manhunter that I built this blog to serve. Just Imagine... "The Secret Origin of the Atom" was by Roger Stern, Dwayne Turner & K.S. Wilson.
Posted by Diabolu Frank at 1:19 AM

If the origin of the League gets retconned again, I'd like the founders to be Martian Manhunter, Black Canary, Flash, Wonder Woman, Green Arrow, Aquaman,& Green Lantern, with Batman & Superman as reserve members, kind of a mix of the original comic & J L A year one.

I love the Magnificent Seven model with Superman & Batman for big league stories, but I also love the quintet model when it comes to the "base" team. That way you can adjust the staffing for the needs of the story. Plus, JLA: Year One is one of the best extended arcs in the history of the property. Incarnations never scratched the itch of a potential JLA: Year Two on account of its jumping around too much and not being very good at all. It would have been nice to have a maxi-series that spent more time with the freshman members Green Arrow, Atom, and Hawkman. Certainly preferable to Waid & Kitson's Green Lantern/Flash mini-series.

This website is very awesome I love its article I hope we will get more article like this the article is very important for all of the uses . Hope you will get more post like this . I hope your website in google. You can know about top search answers if you are interested