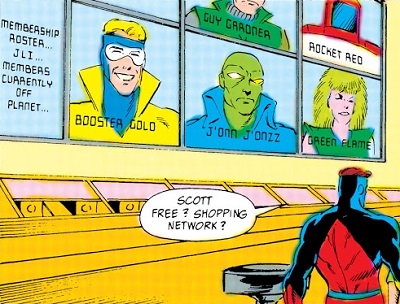 I'm pretty confident that I covered this ground years ago, but while working on Power of the Atom Podcast #607, I got to thinking about relationships within the Justice League again. It's easy to think of the team as one big family, but the '90s hammered home that there are multiple groups within the sprawling League itself, and some folks seem to spend more time together than others. As a side effect of Superman and Batman being held from early Justice League covers, they come off as being maybe just a little stuck up? I mean, the pair and Robin hung out on so many World's Finest Comics covers before the League was "born" that they had their preexisting clique. Obviously both the Man of Steel and the Caped Crusader would happily team-up with most anyone in the DC Comics Presents / Brave & the Bold days, but after the mission was over, they probably gave you the bum's rush. Batman has more tolerance for street level detectives like Black Canary and Green Arrow, and various retcons have had him spend quality time with Zatanna. Due to being fellow travelers in rarified cosmic circles, Superman and Green Lantern pair up more often than you might recall. Martian Manhunter is in an interesting place because he doesn't have an especially deep connection to anyone in the classic Justice League. Like Batman and Superman, he's had enough one-off team-ups over the years to get credit for starting the practice that Batman later took over in TB&TB. That said, serving as Batman's back-up for over a decade allows him some special access, especially in the JLI years when they were basically co-leaders of the team. I mean, Captain Atom was running Justice League Europe, but it always seemed to come down to J'Onn and Batman pow-wowing with Maxwell Lord about the overall JLI. Outside of the League though, J'Onn has appeared in a ton of Superman comics, and was something of a mentor to Kal-El in the aughts. When Morrison and Porter took JLA to #1, you'd think they'd lean on the DC Trinity with Wonder Woman, but it was obvious Manhunter and Batman did most of the oversight while Superman was a contributing figurehead. Ultimately though, Manhunter's loyalties are to the lesser loved Leaguers of the '80s & '90s. Wonder Woman gets along with everyone, but gravitates more toward Superman than anyone outside of her core supporting cast. I'd argue that she's been treated as tighter with the Man of Tomorrow than any of her fellow Wonder Women like Donna Troy, Cassie Sandsmark, Artemis, or Nubia. I'm thinking more Steve, Etta, the Kapetalises, a few key Amazons, Barbara Minerva in recent years, and her mom. The first non-World's Finest clique begins with the Flash. Barry's one of those pivotal figures that everyone likes and wants to be friends with, and Allen is emotional available enough to be such. Elongated Man, Superman, Green Lantern, Black Canary, the Atom, and Zatanna are all close friends and romantic prospects of Barry Allen's. Part of why Barry works better than Wally West is that despite spanning two generations of heroes as a Titan, Barry's sphere of influence is still larger. It's easier to list people that Barry isn't tight with, and who within his circle are closer to each other. 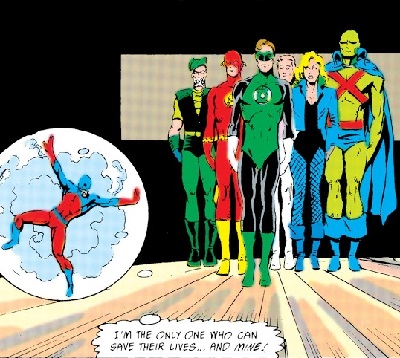 Green Lantern, Green Arrow, and Black Canary are something of a typical trio where you've got two buddies and one of their girlfriends. I have zero recollection of Dinah having any kind of relationship with Carol Ferris, and I don't see her being particularly friendly with Hal, either. Speedy is in the mix as well, but that's still Ollie's family and also his best friend Hal. The Atom can be a bit of a judgemental jerk at times, but Hawkman is defined by being aggressively unpleasant. They shared a book together, and always have team-ups on the occasions that they have solo series. Oliver Queen is also a bellicose partisan, so Carter Hall is a partner in pugnacious discourse, but Ray doesn't much mess with Green Arrow. The Mighty Mite will ride the odd arrowtip, but they're not drinking together. Aquaman is another stand-offish one. He clearly wants to be friends with Wonder Woman and Superman, but they don't give him much ground. Martian Manhunter clearly cares about Arthur, but it's not really reciprocated. His social pool is shallow. Zatanna is broadly well-liked with a surprisingly large network. She's also something of a guy's girl, not especially close with heroines beyond Vixen (and not even her once they quit being roommates.) Excepting her recently seeming to take over the role once held by Kendra Saunders going into the New 52, Shayera Hol remains fairly joined at the hip with her husband. I think many people prefer her, but hardly anybody will suffer through Hawkman to get to her. Looking back, the League cliques are something of a cohort. The Satellite era members seem to be a tight pack. If they were a solar system with Superman as the sun, the rest of the system would likely play out as Barry Allen, Hal Jordan, Zatanna Zatara, Bruce Wayne, Dinah Lance/Drake, Oliver Queen, J'onn J'onzz, Diana Prince, Arthur Curry, Shayera Hol, Ralph Dibny, Katar Hol, and Ray Palmer. Firestorm and Red Tornado have the lowest Q-ratings. Ronnie was forced out of the League going into the Detroit era, and sat every other one out until Extreme Justice. His book wasn't exactly rife with guest appearances, and he was usually a youthful nuisance to the likes of Blue Devil and Captain Atom. Nobody liked John Smith much, and even in Young Justice he was like the one grown-up who would buy you beer.
Posted by Diabolu Frank at 12:00 AM

Something I have noticed is when it's Superman vs Batman ( Kingdom Come, Injustice, Tower of Babel) Manhunter always chooses Batman.

Probably because Superman is always killing him in Elseworlds.