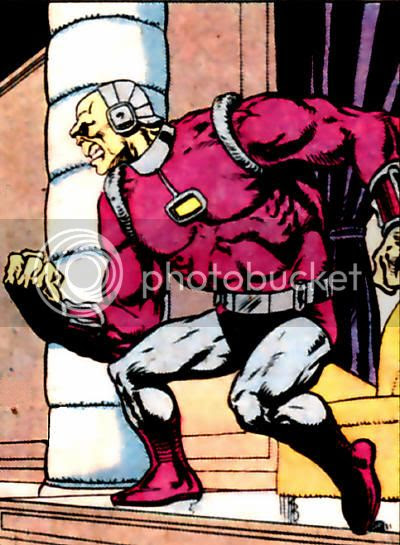 History:
"For years, I was overlord of an entire world, absolute ruler over billions of beings-- and thus, my narrow-minded subjects branded me a tyrant! They did not understand that, to rule well, one must rule with an iron fist.... They simply did not understand power! Perhaps that is why they turned against me in the end-- and turned to the ancient Arkymandryte who came shuffling down out of the mountains... he had been hiding there for decades, waiting-- and now his time had come! The holy man knew power, too, it seemed-- the power of the word--- the power of religious fervor! In a matter of days, he had stirred my people to the boiling point-- and, at last, I was forced to flee the throne for my life! There was, of course, one small satisfaction... the Arkymandryte promptly became an even greater tyrant than I'd ever been! It was a wise man indeed who said that people get precisely the sort of government they deserve-- but when I'm done, all the universe will share the same government-- ME!!"

According to Who's Who: The Definitive Directory of the DC Universe Volume XVI, "it is assumed that he gained his vast superhuman powers sometime after escaping his homeworld, otherwise he would have been able to utilize them to suppress the revolution." Alternately, the Arkymandryte could have had even greater power or influence. 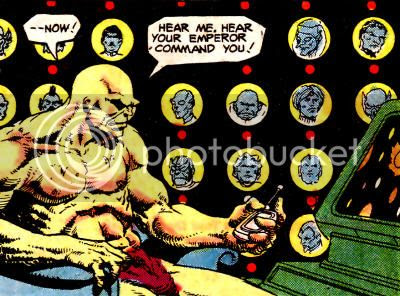 Seeking to expand his own abilities, Mongul attempted to steal the Crystal Key that allowed access to Warworld from its Martian protectors, but was defeated by J'onn J'onzz. Later, Mongul kidnapped friends of Superman to extort the Man of Steel's assistance in beating the Manhunter from Mars and acquiring the key. Controlling Warworld proved a potentially lethal proposition, and Mongul barely escaped the attempt with his mind and body intact. Warworld was destroyed through the efforts of Supergirl and a penitent Superman.

Mongul's next scheme involved murdering Empress Clryssa of Throneworld, then forcing her eventual successor Lady Merria to marry him under the threat of death to her imprisoned lover, Prince Gavyn. Although Mongul had easily defeated Gavyn, the Starman's undead wizard instructor Mn'torr had created a beacon to summon aid from Superman. The Man of Steel freed Gavyn, then distracted Mongul with combat while Starman deactivated a doomsday device that would have otherwise been triggered. After a brutal, protracted battle, Mongul beat Superman unconscious. However, Mongul soon learned that he had lost the device that had kept Throneworld's interplanetary empire intact for millenia, sparking widespread succession. Confronted by a returned if seriously fatigued Superman and Starman, Mongul saw no point in further battle, and teleported elsewhere. 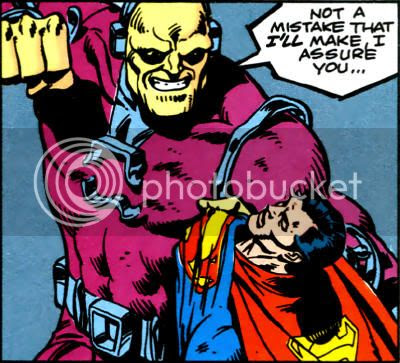 Mongul decided to take revenge on Superman after all, and murdered a Controller to gain possession of a Sun Eater. Mongul lured Superman into a cube-trap, then defeated a team of super-heroes consisting of Black Canary, Red Tornado, Supergirl and Green Lantern Hal Jordan. Superman was released by the time-traveling Legion of Super-Heroes from the future, whose members failed to humble Mongul. However, the Legionnaires left to stop the Sun Eater, and the resulting explosion coupled with the day's numerous grueling battles allowed Superman to finally beat Mongul unconscious. Sun Boy and Element Lad built a makeshift cell to hold Mongul on the moon, but he was soon free once again.

In a second revenge attempt on his birthday, Mongul sent Superman a present containing a Black Mercy, "something between a plant and an intelligent fungus" that attaches to a host and feeds them a complete fantasy world from the desires within their mind. Before Mongul could take the trap further, he was confronted by Wonder Woman, Batman and Robin. After a lengthy one-sided battle with the Amazing Amazon, Batman managed to free Superman, and a savage battle ensued. Mongul nearly killed the Man of Steel, until Robin dropped the Black Mercy onto his chest. Superman claimed that he was going to secure the subdued Mongul in a black hole on the western spiral arm of the galaxy, but the truth of the matter is unknown.

Distinguishing Features:
Mongul has pale yellow skin and only four digits on each hand. The muscles of his upper body are overdeveloped in comparison to the lower. 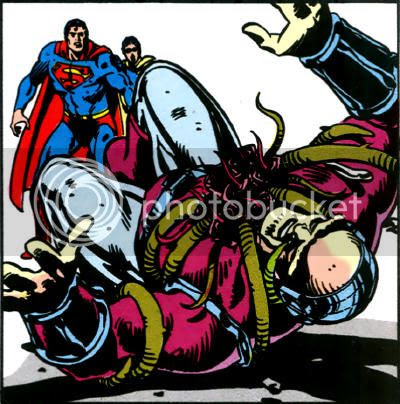 Powers & Weapons:
Mongul is largely invulnerable, as he has withstood a variety of assaults from some of the most powerful super-heroes in existence individually and in groups, including the Justice League and the Legion of Super-Heroes. He can project devastating energy, seemingly from any part of his body, with sufficient magnitude to down Superman. Mongul can either encase himself in an energy sheath, or covert to a pure energy form, as evidenced by his single blow defeat of Starman. By Superman's own admission, Mongul's raw strength appears to be his equal or better, and Mongul has repeatedly beaten the Kryptonian in combat through a combination of brute force and energy blasts. Mongul can shatter Green Lantern power ring constructs and inertron (the strongest metal known in the 30th century) with relative ease. His body can withstand anti-energy, Kryptonian Heat Vision, and the absolute vacuum of outer space. Mongul possesses limited telepathic abilities which allow him to communicate mentally with other sentients in his immediate proximity. He can teleport at will through unknown means.

Mongul rarely acts without some form of impressive weaponry at his disposal. His most common tool is his Cube-Trap. His other signature weapon is the Black Mercy, a parasitic, semi-intelligent, telepathic plant/fungus hybrid that attaches to a host and feeds them visions of a near inescapable fantasy world within their own mind. The Black Mercy must be handled with special gauntlets to prevent succumbing to its influence. Mongul has used a floating communication sphere to maintain contact with Superman as he flew millions of miles through space. Mongul has his own heavily armed space ship which is the size of a small city. For less demanding travel, he has been known to ride a levitating disc with the breadth of a room. Mongul sometimes employs a servitor robot, once wrested control of a Sun-Eater, and briefly piloted Warworld. 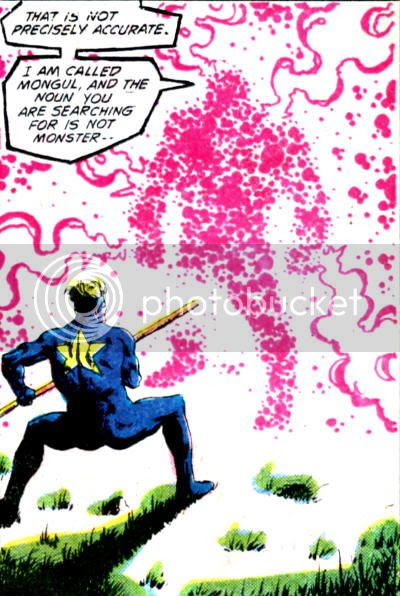 Quote: "...As a minimally sentient being, you should have gathered some information about your condition. You have been reduced and imprisoned-- separated from your staff and gauntlets of power-- in sum, reduced to a helpless tool useful only to me. I suggest you remember that. Shall we proceed to transfer the Imperial Crown to my deserving brow... whence it can be the seed from which my former domain may be recaptured? ...You will, because if you do not, your precious... will die... And then I will take the crown the hard way.

Created by Len Wein & Jim Starlin
Posted by Diabolu Frank at 12:35 AM