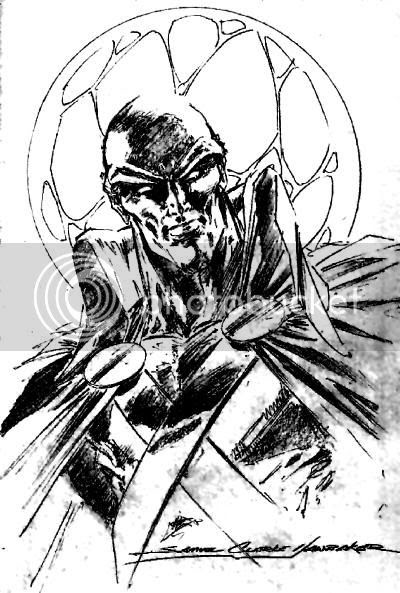 Hawbaker was a Neal Adams clone who did some sweet looking art for Marvel Comics on such cultural detritus as Nomad and Werewolf by Night. I figured he must have seriously pissed off some editors, because it wasn't long before he was doing covers for Lightning Comics dreck like Hellina, a bad girl best known for pioneering going the full monty on variant covers. Before the '90s were out, he seemed to fall off the face of the Earth.

I'd begun to take the web site Comic Art Fans for granted, because I'd already posted links to most of the best Martian Manhunter art there. It came as a terrific shock to visit recently and find pieces by two of the biggest names of the '90s and Samuel Clarke Hawbaker. Given that both Adams and Michael Netzer had handled the character in the '70s, there's some nice continuity here (pun unintended, but appreciated retrospectively.) If Hawbaker is on the convention circuit now, I hope I can snag a piece next summer. Anybody interested in a topless D'Kay D'Razz?
Posted by Diabolu Frank at 1:42 AM

Teasing Hawbaker for his Daisy Dukes and s-kicker boots aside, I love the guy's work. I say canals it 'tis!

Cool that's the one he made for me. I was very happy with this one. I need to scan in a few more to Martian folder.

Good catch! If you don't mind my asking, how was Hawbaker? Cool guy? Decent rates? I'm seriously interested in getting something from him sometime.

Very cool guy he was very happy to draw something other than Nomad for a change. I think I paid 40 for the pencil sketch.

Sweet! I hope I can catch him at a con, then. I'll definitely be at Houston's Comicpalooza, and it looks like I might catch Atlanta's Dragon*Con. I can see about passing him a c-note for a full figure. The good thing about collecting Martian Manhunter art is that most artists don't even know the characters, much less having gotten sick of drawing them. Yesterday, I was looking at Dave Gibbons sketches at CAF, and it was about 90% Watchmen. What a drag!

One of the other characters I get is Deathlok. Artists usually get a kick out of drawing Martian Manhunter or Deathlok for me since they rarely get to draw those characters. Haven't been to Dragon*Con in a long time that's were I met my wife.