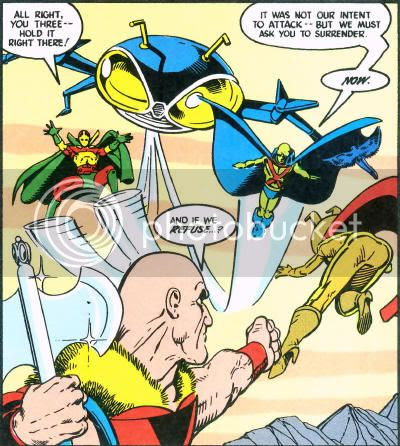 Batman asked Kimiyo Hoshi (a.k.a. Doctor Light II) to repeat the story of where she obtained a Justice League signal device until she was exasperated, but Martian Manhunter entreated, "Please, Doctor. It's important."
"All right, Manhunter--"
"Call me J'Onn."
"--I'll go over it again. For you."
She did, until Batman pleaded for her to turn over the device. "'Please.'? Did you actually say-- 'please'? Here, take it-- quick-- before I faint!"

On the sidelines, other Leaguers watched Jack Rider's Hot Seat, the O'Reilly Factor of its day, as it grilled their new formation. "Then there's the extraterrestrial in their midst: the so-called Martian Manhunter. At a time when America can't trust other countries-- how can we trust a creature from another world?"

Green Lantern Guy Gardner, typically a far right-winger himself, was incensed to the point of threatening to go rip out Ryder's heart after his televised insults. Martian Manhunter raised his hand and decreed "You will do no such thing." The Dark Knight also chimed in, as J'Onn J'Onzz agreed "I'd advise you to listen to Batman, Guy. There's just so long we will tolerate this infantile behavior."

In Bialya, the surviving Champions of Angor Wandjina, Silver Sorceress and "Bluejay" attempted to dismantle the hostile Middle Eastern nation's nuclear weapons program. Their world had been lost to the same, and they hoped to rescue ours from our war mongering. Instead, they were convinced by Colonel Rumaan Harjavti to redirect their global crusade, under his guidance.

Later, Batman and Martian Manhunter studied the signal device in the lab of the team's cave-based headquarters. The Dark Knight Detective interrupted the Sleuth from Outer Space to pedantically interject that the signal couldn't possibly be genuine issue, and suspected it to be an inferior copy. "I didn't say it was one of ours... I said it seems to be one of ours... Actually, Batman-- it's a superior copy. There are elements of the design that should be incorporated into ours." The Caped Crusader was taken aback, but before he could more deeply consider the implications, Captain Marvel heralded a news report regarding the former Assemblers/Champions of Angor having struck missile silos in Israel.

Guy Gardner cheered, "I love it! Let's hope those three take out every two-bit country that's packing nukes! Nobody but Ronnie-Boy should have his finger on the button! Then we'd have the world where we want it, huh?" The Martian Detective thought, "Pathetic!" He then shared, "Guy, your logic... if I can even call it that... is utterly unique."
"Oh... then you agree with me?"
"Of course not."
"Well, I'd expect it from you-- I mean, you're a freakin' Martian!"

The team traveled via Blue Beetle's "Bug" airship to confront the trio, but Guy Gardner launched an attack before more diplomatic overtures could be made. Wandjina proved too much for the Green Lantern, and was next met by Mr. Miracle and the Alien Atlas. "It was not our intent to attack-- but we must ask you to surrender. Now." Manhunter's pointed request could not be enforced, as Bialya demanded the Bug leave its airspace, or be blown out of the sky. The Caped Crusader ordered retreat.

Subplots included Maxwell Lord IV looking into Jack Ryder and meeting with a "Mr. Gold," while Dr. Fate tried to warn the mystical threat the Gray Man off his chosen course.

Just saw on the adult swim site, Robot Chicken did a really funny JLA "Take a sidekick to work" day skit, with Martian Manhunter featured. Its pretty funny..and nice to see J'onn get props, even if he does get beat up at the end!

Cool! I'll have to see if I can find it on the internet. Thanks for telling me about it! No Zook, I suppose?

No zook I'm afraid. Its the last skit on the latest full episode of Robot Chicken posted on their website....www.adultswim.com. The episdoe's called "They took my thumbs"