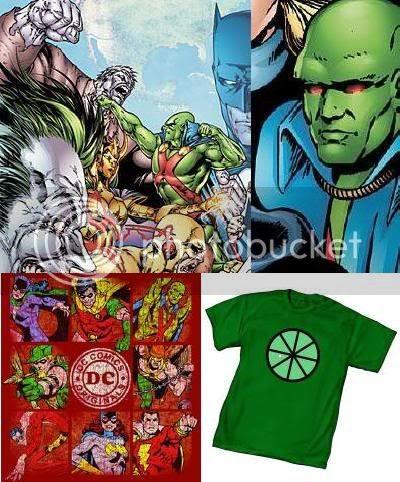 After a five month hiatus, I am compelled to run another "Martian Sighting." I quit because DC Comics had murdered Martian Manhunter, but were still profiting off his corpse with reprints and the odd t-shirt. Didn't seem worth my time to point out the character was still alive in the back catalog, but too much coolness is available for pre-order to ignore this time out...

Sure, it's some Multiversal duplicate, but at least he's in the classic costume. Plus, there may be Despero...

I intentionally skipped this in hardcover specifically because I hated J'Onn's eyes. They were really dark blue in that period, so that garish red in the re-coloring bugs the tar out of me.

Ethan Van Sciver drawing a classic (if evil) Manhunter from Mars battering Batman is heavily fortified with vitamin WIN. Add the first Post-Crisis appearance of Zook for the championship. Lose the game to a lame story and a replacement artist...

Reprints J'Onn J'Onzz's final appearances as an official member of the team for the next fifteen years. Includes the first appearance of Commander Blanx and his eradication of life on Mars.

By "retro" they mean chopped-up and recycled. Not a bad design, though.

It will be mine, though I wonder why the "pie slices" aren't white...
Posted by Diabolu Frank at 7:00 PM

I don't get why pie slices is MM's symbol...

I think the tee shirt will have to be mine.

Kaiser, I was all set to say something cocky like "take it up with Joe Certa" or "because," until I realized I haven't the faintest clue. For me, it's always been there, since it was on the belt of the Super Powers action figure that introduced me to the character. A quick glance over my back issues indicates it was Michael Nasser/Netzer who started the trend in print, though he may have been working off a style guide.

Netzer used to visit this blog, when he still operated one of his own, and even designed our banner. Unfortunately, he disappeared from the internet months back without a word, so I'm not sure if he's readily available to ask...

The retro style Justice League shirt also appeals to me, since the Winged Wonder is on there as well, right below the Alien Atlas. Is it me or do these shirts remind anyone of The Brady Bunch? Couldn't they get a picture of Julie Schwartz in the middle? (The shirt also features Gren Arrow and Plastic Man... can Adama and Rick be far behind?)

With the Martian Manhunter symbol t-shirt, I can only hope that at some point DC will give us a nice Hawk logo shirt as well.

The MM symbol t-shirt....I would love to be able to wear that when I teach my workshops on the history of comics in america. Snazzy.

I always wondered the same thing..its kind of a weird symbol, and it doesn;t seem to tie into anything with J'onn. It does have a little bit of a primal design...like something you might find carved into a cliff face somewhere to represent the sun, or another planet (mars?). Maybe its some kind of martian hyroglph.

Grasping at straws, can you tell? :)

Wow-- bringing back Martian Sightings was a good idea, considering all the comments here! Good thing next month's solicitations are already in the works.

Sarah, I've given some thought to the symbol in the past, and have my own fan notions about what it represents. Per John Ostrander, it's a shape-shifting plant that acts as a Martian's clothing. He dubbed it a "zook," tongue firmly planted in cheek.

Luke, the images from this Very Brady T-Shirt have popped up without cropping elsewhere, such as here. There's dude-centric versions too, that I'll post inevitably. If you like the grid though, there's another offered this month with other heroes. As for the Hawks logo shirt, are you being ironic? It's offered for pre-order this month as well!

No I was not being ironic! I don't get Previews so I was unprepared for the sheer awesomeness!

Hee hee! Glad I could serve!