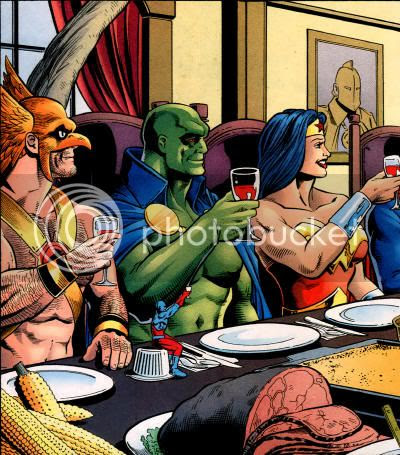 The Manhattan headquarters of the Justice Society of America: The Batman expressed concern about his JLA joining Mr. Terrific (Michael Holt)'s JSA for Thanksgiving dinner, in the event someone like Despero made the scene. The Dark Knight would continue to fret, despite Terrific's dismissal of his concerns.

The teams mingled in a large hall, including the Martian Manhunter chatting with the Flash (Jay Garrick). This continued as the Golden Age Flash admonished Impulse and Jakeem Thunder for coarse language. J'Onn J'Onzz next moved on to Firestorm (Ronnie Raymond). At dinner, the Manhunter was seated between Hawkman and Wonder Woman with The Atom (Ray Palmer), but a brief battle with Kulak the Sorcerer and the Warlock of Ys spoiled the meal. 33 minutes later, pizzas were delivered.

Tiny Atom sitting on the JLA table never gets old in my opinion. Although they could've gotten him something better than a custard cup to sit on...

Too bad this wasn't a good story. I've always wanted to read one of those JLA/JSA Thanksgiving crossovers but I guess this isn't the one to read.

Oh, and Happy Thanksgiving, everyone!

Why isn't J'onn wearing a shirt? That's my question.

Well, Hawkman isn't, either! Obviously they're not in a restaraunt or the "No Shirt No Shoes No Service No Pets" regulation would leave out Hawkman, J'onn, Gypsy, and Zook.

I always did wonder why the heroes stayed in costume even in private. Probably for the same reason that Clark Kent still wears eglasses even when he visits his parents.