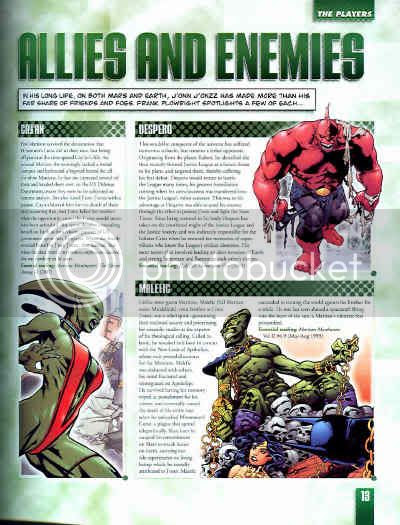 So I promised to get back to the British Martian Manhunter spotlight magazine that came with a boxed figurine over the weekend... of the first week of October. Whoopsie. Not only had I forgotten that commitment, but I'd even misplaced a nice sized but unfinished post intended to serve that role. Well, maybe later. Instead, we're jumping to pages 13-15, this series' section devoted to "The Players."

In his long life, on both Mars and Earth, J'onn J'onzz has made more than his fair share of friends and foes. Frank Plowright spotlights a few of each...


...and by a few, they mean no one prior to the late '90s Martian Manhunter ongoing series save one.

The article opens with Cay'an, the villainess from the 2007 One Year Later conehead mini-series I recently purchased but haven't read. She's given a paragraph, and comes off as J'Onn J'Onzz's Fatality, which seems appropriate to me. Her picture is the same one used throughout the internet, because there are only about three usable panels with her in existence, and almost everybody chooses this one. Her Essential reading selection was obviously Martian Manhunter: The Others Among Us.

Next is Despero, whose picture is the Carlos Pacheco splash page from JLA/JSA: Virtue and Vice (2003,) his Essential reading. Now, I love having a publication establish Despero as one of only six Manhunter villains of note, to rub it in the faces of naysayers, except that JLA/JSA graphic novel doesn't really feature a battle with J'Onn. The article claims Despero initially targeted the JLofA as a future threat to his rule in their first issue, which is a "creative" interpretation of the actual plot. The next thirty years were glossed over in one sentence, before noting the period when Despero's consciousness resided within the little robot L-Ron (a fact DC never quite grasped themselves, instead acting as though L-Ron and Despero shared the same body.) The first mention of an actual battle with Martian Manhunter hinged on that, as it referenced the issue of Young Justice when the team (misidentified as the Teen Titans) fought a J'Onn J'Onzz possessed by Despero's spirit (a plot point carried over from a Supergirl two-parter. Frank Plowright (no relation) claimed Despero started the Infinite Crisis (instead of being the villain of a lead-in closer to an Identity Crisis epilogue,) and mentioned the Superman/Batman story he had recently appeared in (again failing to observe Manhunter's role in same.) So basically, instead of helping my case by talking about the relationship between Alien Atlas and three-eyed tyrant, Plowright as near as possible ignores it.

Malefic received the third entry, with art by Rick Leonardi and Sean Phillips excerpted from JLA: Classified #46. Since the writer and his magazine fixated on the Ostrander Martian Manhunter series, the facts here were to my recollection dead on. Essential reading: Martian Manhunter Vol II #6-9 (May- Aug 1999.) Unless the Brits got a series we didn't, I'd be hard pressed to figure out what Vol I was. The Detective Comics run? The '88 mini-series? American Secrets? The Special?

Gypsy arrived on the next page, with art taken from a panel in her brief run as a member of the Birds of Prey. Somehow, Cindy Reynolds' hometown was Detroit, but after battling super-villains, she joined the new JLofA in... Detroit? I'm not even going to try to unravel that erroneous mess. It thankfully improves from there, revealing Despero's murder of her parents, Gypsy's resumption of super-heroics and membership in the Conglomerate and Justice League Task Force. "She and J'onn developed a very close bond, like father and daughter, while working together." Not that you could tell from her failure to appear much in the three year run of the Ostrander series, but at least Plowright forgot that book's insinuation that Gypsy was herself part-Martian. Essential reading: Justice League Annual #2 (1984.) Um, no. They forgot the "...of America" part, and that her first appearance wasn't much beyond a cameo. Gypsy had numerous spotlight stories throughout that series, which Plowright clearly hadn't read, as well as Justice League Task Force.

Libra fell below Gypsy, meaning the villain who murdered J'onn J'onzz, even though the characters continue to have little to do with one another. In order to establish a stronger connection, the writer brought up J'onn's role in Salvation Run, but it still reads thin. Essential reading: Final Crisis: Requiem (2008.) Art by Carlos Pacheco from the cover to Justice League of America #21 (2008.)

Scorch returns us to more valid entries, even if her brief rivalry and romance with J'onn J'onzz never read like anything but a blatant authorial construct. "Scorch is an other-dimensional villain with complete mastery of the fire she can generate. Scorch slipped through to Earth when the Joker temporarily acquired magical powers." That doesn't sound quite right. Wikipedia sez: urnt! "Originally a normal human from Pisboe, Virginia, Aubrey Sparks was transformed into Scorch during the short "Emperor Joker" storyline." Yeah, that's more how I remembered it, but since that whole arc read like a fever dream, I wanted independent varification. The entry gets hijacked by Fernus, whose nature is similarly misinterpreted. Art by Doug Mahnke & co. from her Essential reading: JLA: Trial By Fire (2004.)

On to the final page, we start with the Bronze Wraith, which seeing as he was just an alternate identity of J'onn J'onzz, seems woefully out of place. Of all the friends and foes, here's Martian Manhunter's Halloween costume from 1973? The art was by Tom Mandrake from his Essential reading: Martian Manhunter #17 (April 2000.)

Below was Doctor Trapp, a technically accurate title for Larry Trapp, though he operated publicly without the second "p." The entry blurs the line of when Trapp became a super-villain, making it seem like he was a bad guy from before the passing of his "girlfriend," when in fact he took to killing metahumans to avenge his wife's accidental death. The art was a Jamal Igle head shot from Dr. Trap's Essential reading: Martian Manhunter #36 (Nov 2001.)

Jack Kirby's Kanto was the penultimnate character here, leaning on his Who's Who entry and appearances in the latter issues of the Ostrander series for support. Dr. Trap's origin was in Chase #3, but I let that go, since he only had a non-flashback fight with J'onn in his essential reading selection. Applying the same rule, why isn't Kanto's offering the In My Life story arc, instead of Essential reading: Jack Kirby's Fourth World Omnibus Vol 1 (2007.) I guess because DC makes nothing off three Martian Manhunter back issues, and a c-note off the suggested tome.

Finally, My'ria'h D'all's name sounds like those of love interests from two previous Ostrander series, and her being so named once again poos on the 1988 J.M. DeMatteis revamp, but the guy was never known much for originality or hewing to continuity. Tom Mandrake's cover to Martian Manhunter #33 served to illustrate the wife of J'onn J'onzz and mother to his child. Essential reading: Martian Manhunter #33-36 (Aug-Nov 2001,) and buying these will save you major bucks in familiarizing yourself with Kanto, as well.

So, according to this magazine, the most notable Martian Manhunter enemies are:
Cay'an
Despero
Malefic
Libra
Scorch
Doctor Trapp
Kanto

and his only allies worth mentioning are:
Gypsy
Scorch
Himself (in another guise)
and his departed wife.

So, how would you rate Mr. Plowright's research assignment? I'm leaning toward a "C," but I grade on a curve...
Posted by Diabolu Frank at 10:36 PM

While I appreciate not just mentioning the whole Justice League, C-.

That image of Cay'an put me off reading The Others Among Us for a variety of reasons.

I completely understand. I fail to see the appeal myself.

While I like the flat chested idea, eggs doesn't sit right with me. I prefer the Ostrander series explanation of a merging then division. Sort of a hyper evolved cell division.

That does make more sense, considering they are all shapeshifters.

I had kinda sorta assumed eggs were involved only because of Edgar Rice Burroughs.