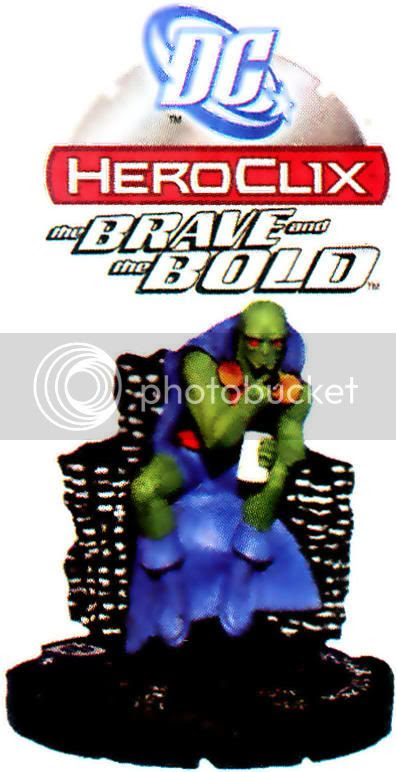 Wow. I've been so involved with other work, I totally missed when this month's advance solicitations went up on the 19th. I was shocked a new Previews was already in stores. Good thing there wasn't much new of note for this blog, and last months uncovered extras were bountiful...

Team-up and fight for justice! DC HeroClix: The Brave and the Bold brings famous heroic (and a few villainous!) pairings from the pages of DC Comics to your tabletop.

Featuring 55 all-new figures, including classic DC Comics duo-figure team-ups like Flash/Green Lantern and Luthor/Brainiac, The Brave and the Bold showcases some of the most exciting figure sculptures ever seen in HeroClix. Plus, the new game mechanic - Alter Egos - brings secret identities to HeroClix like never before!


I'm beginning to suspect the image that will define Tom Mandrake's career is his cover to Martian Manhunter #24. There's actually a Wiki page for Chocos. More product facts can be found here.

"The New World"
DC's superheroes have always reflected America; protecting what's right and fighting for good. In the previous ages of DC Comics, these were characters you might see in a parade, waving a flag, and carrying a child on their shoulders. They were living in simpler times and they were "as American as apple pie." But since then, America has changed. There are now real dangers in America, and DC wanted our new world to be reflected in the DC Universe. It was now very clear. There would be dangerous consequences from being a superhero.


Is it wrong I'm more excited about animated Conehead OYL Manhunter and an alternate Earth Justice League Detroit than I was for the Wonder Woman DTV flick? In my defense, my fandom has been abused for years, not excluding Gail Simone's tepid current run?


BRIGHTEST DAY #0
On sale APRIL 14 • 56 pg, FC, $3.99 US
Written by Geoff Johns & Peter J. Tomasi
Art by Fernando Pasarin
Cover by David Finch
1:50 Variant cover by Ivan Reis
The biggest event in comics continues as BRIGHTEST DAY burns back the BLACKEST NIGHT from the writing team behind GREEN LANTERN and GREEN LANTERN CORPS – Geoff Johns and Peter J. Tomasi! And don’t miss the exciting DC Comics debut of red hot cover artist David Finch (New Avengers, Ultimatum)! The effects that the already classic BLACKEST NIGHT will have on the DC Universe will be felt for years to come and this issue not only sets the stage for the new ongoing biweekly DC Universe book BRIGHTEST DAY, but also the next exciting era of the DC Universe!Retailers please note: This issue will ship with two covers. This issue features a special ordering incentive. Please see the Previews Order Form for more information.


Back from the dead? Find out here!

BLACKEST NIGHT DIRECTORS CUT
On sale APRIL 7 • 80 pg, FC, $5.99 US
Featuring contributions from GEOFF JOHNS, IVAN REIS, DOUG MAHNKE, JOE PRADO, PETER J. TOMASI, PATRICK GLEASON & others
Cover by IVAN REIS
Prepare for the ultimate behind-the-scenes experience from the event of the century! With the creative minds behind BLACKEST NIGHT as your tour guides, you’ll marvel at hidden Easter eggs and meanings throughout the series in our director’s commentary section. Discover shocking scenes that were left on the cutting room floor including actual script pages that were never drawn. Be astonished at incredible never-before-seen designs from the best-selling event! Plus, many more exclusives that you’ll witness within this mammoth special including an early look into BRIGHTEST DAY!


Mythology: The DC Comics Art of Alex Ross (Paperback, New Printing)
Softcover, 320 pages, FC, $29.95 US
With art that looks like a hybrid of Norman Rockwell and Jack Kirby, artist Ross has become the preeminent painter of superheroes of his generation. This lavish coffee- table tribute puts him into a pantheon as exalted as the superbeings he depicts.


TEEN TITANS #82
On sale APRIL 28 • 40 pg, FC, $3.99 US
Written by FELICIA D. HENDERSON
Co-feature written by SEAN MCKEEVER
Art by JOE BENNETT & JACK JADSON
Co-feature art and cover by YILDIRAY CINAR & JÚLIO FERREIRA
Now that Superboy is reunited with the Teen Titans, Wonder Girl’s discovering what having her boyfriend around all the time means — and it’s not all good.

When I first saw that Heroclix I thought that was a custom. That is awfully adorable. I wonder if there's an Alter Ego John Jones in the set?

I don't know why (just craving more Bruce Timm JLU, probably), but I am psyched for Justice League: Crisis on Two Earths. I've already requested it at the library. I'm willing to overlook the OYL look because that fight sequence 45 seconds in is pure awesome. Hopefully it won't disappoint.

I liked the Wonder Woman one, which I mostly bought for my girlfriend, but ended up enjoying probably a bit more. It certainly wasn't mind blowing, but it was far from terrible. I walked away feeling like I'd enjoyed the 90-odd minutes.

I caught the New Frontier 2-disc for about $10. The Wonder Woman single disc is selling for that at Frye's, but I'm holding out for a better deal on the deluxe edition. So far, I've given the rest a pass.