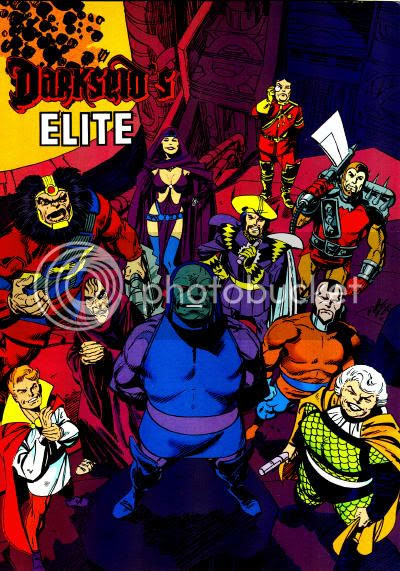 I can gripe all I want about the New Gods getting tied into Martian Manhunter's mythology, but judging by polls here and the internet in general, folks like J'Onn J'Onzz fighting Darkseid and Kanto. But see, right there is part of my problem. How can any one hero legitimately battle Darkseid alone? The guy rules an entire planet, and has a whole host of minions as powerful as Earth's greatest metahumans. Besides legions of parademons, there's the diabolical sadist DeSaad, body-hopping scientist Dr. Bedlam, malevolent headmistress Granny Goodness and her Female Furies, manipulative mentalists Amazing Grace and Glorious Godfrey, the fascist Virman Vundabar, and the hunter Steppenwolf. Then there's Kalibak, a brute strong enough to tussle with Superman, or Necromina, who could potentially control the undead Black Lantern J'Onn J'Onzz with her powers over resurrection. The flame wielding Infernus works with the one element Manhunter is most vulnerable to, and logically, master assassin Kanto should have killed J'Onn in Final Crisis. Heck, the amphibian Deep Six would even be a challenge.

Now, all of these guys are supposed to be gods, and even after Gerry Conway ruined their mystique by making them glorified D-list super-heroes in the 70s, any two of them should be a problem for one Manhunter from Mars. The worst part though is that, if you don't treat them as awesome deities (preferably in their own continuity separate from the mainsteam DCU,) they're kind of silly looking. I know J'Onn's costume isn't the best to begin with, so why compound the eyesore with such a sartorially challenged lot?

Anyhow, here's John Byrne art from the front of the "Darkseid's Elite" profile page out of the 90s looseleaf edition of Who's Who. If only they were always handled so well...
Posted by Diabolu Frank at 6:12 PM

"but judging by polls here and the internet in general, folks like J'Onn J'Onzz fighting Darkseid and Kanto."

I'm going to log on to every computer at work that I can and vote for The Human Squirrel just to even out the odds a little. (Okay, not really. But I did forget to vote for the Lizard Men, so I just might do that.)

While I concur they are often mistreated (I've not yet read the original Kirby stuff aside from the SuperPowers series, so I'm not sure what takes are valid), I think the New Gods (who've been around for millenia, so how "new" can they be) have a great mythology to be exploited by any hero. Martian Manhunter's long life and demigod powerset make him more qualified than your average hero, and I've read Batman stories involving the New Gods that were downright awesome.

I don't mind their costumes, especially in their historical inspirations. Kanto seemed super lame until I read up a little on his inspiration Cesare Borgia, and now he's my favorite aside form Darkseid himself. Kirby's best qualities are often a bit intangible, I've found. I like this image, although the perspective on Darkseid kind of weirds me out.

I guess I'm less for the Apokalips crowd being main villians for J'onn than I am a fan of J'onn dealing with them as an otherworldly, superpowerful threat. I would keep the majority of Ostrander's New Gods centric plot points.