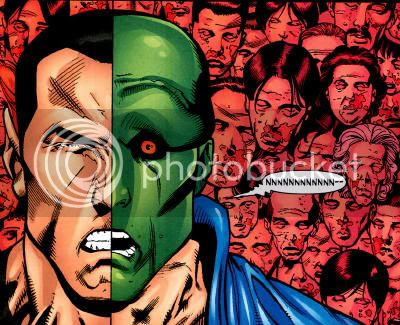 I finally cracked open World War III Book One for the first time last week, my first thought being "Isn't 'Book One' awfully pretentious for a $2.50 floppy?" I'd read the series 52 until giving up at 25, but I keep abreast of DC goings on through the internet. I could mostly follow the action in this spin-off mini-series, but still got lost at times. That means this book was aggressively anti-new reader, so heaven help the uninitiated.

The Country of Bialya stands in ruin. The death toll is staggering. In every direction, the corpses of millions of innocent men, women, and children litter the ground; a tapestry of blood, pain and destruction knit by the bottomless rage of one man.

With the murders of his innocent wife, Isis, and her brother, Osiris, the Black Marvel Family has been destroyed. Having disposed of their killers, Black Adam turns an eye toward China to find the people who are truly responsible for the death of his loved ones.

Only the entire world stands in his way...

That there is a recap, and it was good enough for me to get with, but let's see how it holds up as we progress.

Week 45, Day 5 of the year without Superman, Batman or Wonder Woman following Infinite Crisis. Walking out from a litter of bodies, a little girl asked Black Adam, "Why? Only a select few are responsible for your loss, yet millions have paid the price."

"Child, you speak beyond your-- years?"

The villain had noticed the girl crumple a handhold in a steel girder before smacking him with it. As Black Adam sailed through the air, the girl followed, transforming into the Manhunter from Mars. "Black Adam!!! The time has come for a reckoning! I am in full control of your body's motor functions. You will not move unless I allow it. Continue to struggle and you will lose the privilege of thought. This atrocity you are committing must en-- --NNGH!! Your mind... so... strong..."

Black Adam was able to concentrate hard enough to whisper the magical name "...Shazam..." bringing down mystical lightning to scorch the Martian Manhunter. Meanwhile, in place of the arch demigod stood the Ancient Egyptian Teth-Adam. "You're not like the rest of them, J'Onn J'Onzz. You're not human. I honestly believe you might kill me now, in this body, while you have the chance. I admire your fortitude, if nothing else." With one magic word, Black Adam was restored and Martian Manhunter again electrically assaulted.

J'Onn continued to struggle. "Pathetic. Too stupid to admit defeat. Even now, I can feel your fingers in my head, still scrambling to regain control. You want to play in my mind so badly, Manhunter... be careful what you wish for. Take it. Every man, woman and child. The memory of all those I've killed today. You asked me why before, Manhunter. My vengeance is just. My fury is righteous. I swim in an ocean of blood and do not drown beneath the waves. Is something amiss, Manhunter? Is my mind too black for you?" The Martian Manhunter flew-- screaming, crying, horrified-- off the planet Earth.

My first question is, where in Black Adam's power set was that even possible? I haven't followed him closely since his JSA revamp, but I thought the courage of Mehen only provided him the same convenient resistance to telepathy Superman enjoys. Now all of a sudden, he's Eric Draven at the end of The Crow movie, right up to the bits of dialogue not swiped from Black Adam's idol, the Sub-Mariner. "Oceans of blood?" Black Adam gets an "F" for articulation, as cool posturing doesn't replace a remotely valid explanation.

You can also see that Grant Morrison and John Ostrander's work influenced this tripe, scripted by inker Keith Champagne. J'Onn's psychic smackdown was straight out of JLA: Earth 2, while the assumption Manhunter would kill calls back to the Martian Manhunter series, where J'Onn stalked Clark Kent for years, looking for an excused to snap his neck before he reached adulthood. I hated that take, but an alternate reading is that Black Adam was projecting onto J'Onn, and coupled with the magic lightning strikes, "reprogrammed" J'Onn to become the jerky One Year Later conehead.

Anyhow, these first six pages, while personally objectionable, were at least functional. Champagne's reach as a credited writer really outstrips his grasp from here on. In a seventeen skinny panel spread, Champagne attempts to pack in as many impact shots from across the globe as he can. This is the world reacting to the Bialyan massacre and mobilizing a response, but it just doesn't play well. Four additional pages are wasted in a battle that only offers more gore and a tenuous connection to yet another spin-off mini-series, Uncle Sam and the Freedom Fighters. Another three pages were wasted on a terribly random aside involving Nightwing becoming a murderous, larcenous vigilante. I'm aware this was in fact Jason Todd (he even tosses a red hood at some thugs,) and teases the first OYL Nightwing arc. However, it is completely irrelevant to the main story, and would be a total "WTF?" moment to future readers if I thought anyone was ever going to bother reading this in five years.

Another five-and-a-third pages involve explaining how Jason Rusch and Firehawk rejiggered the Firestorm matrix after the disappearance of Professor Stein. I actually followed Firestorm before and for a ways after the OYL period, and still forgot that Rusch was briefly merged with Cyborg. Not that any of this matters, since it again is only tangentially related to a story in dire need of more exploration, and teases a story arc that had already begun a year earlier and I believe already just about ended.

Fifteen scrawny, near silent panels continue to hint at the changes in status quo that followed Infinite Crisis, but which had already been addressed in individual books. The cryptic mess really goes overboard during a double pages spread of twenty-six disembodied, unattributed dialogue snips, along with seven connected to mouths amongst disconnected images that either make no sense or belabor points handled better in other books. This continues on a third page, with Martian Manhunter in a fetal position, still unable to filter the psychic streams of the entire planet. It makes for a striking visual, but also a dissatisfying reading experience, and a definite lousing up of continuity in a books whose very existence turns on the stuff.

At least the art was by Pat Oliffe and Drew Geraci, the former a strong storyteller with a clear, under appreciated style. A lesser artist would have turned the awful script into something completely incomprehensible.
Posted by Diabolu Frank at 11:59 PM

I think a more telling and awesome explanation for the OYL look would have been he just decided to try a new look. Because really, that miniseries (the MM one) was obviously a writer coming in saying, "I've got this bold new revamp." Of course, this revamp had little appreciation for history, was largely miss-characterized and wasn't that enjoyable. It isn't surprising that the explanation for the paradigm shift was largely a mess.
That said, I liked the little girl disguise trick, and you're right that fetal position shot is striking, even if how he got there is silly. Pat Oliffe is good, and I like Black Adam as a foil for J'onn (see the excellent Black Adam mini by Tomasi and Mahnke for a couple of MM cameos that underline this). Otherwise, like most post IC MM, deeply flawed.

Thanks for reminding me why the only comics I buy nowadays are back issues and reprint collections.

Tom, I see where you're coming from. My monthly reads are pretty slim, but I still pick up trades, though at DC my tastes skew older (woooo Showcase Presents!)

Tom, Black Adam is another character that should have remained the specific villain of one character, or a general DCU villain. However, after reading the mini, I suspect I may be stuck with another dubious Vile Menagerie entrant.

Er-- that second one was directed at M.C.

"Thanks for reminding me why the only comics I buy nowadays are back issues and reprint collections."

This is why I'm retreating further into my pile of Showcase Presents. The whole Cry for Justice debacle has me at the breaking point and I feel like there's nothing left in modern comics for me to relate to. Brightest Day BETTER live up to its promise or I'm going to have to find a better use for my fifty-odd bucks a month. At this point I'm thinking private yodeling lessons would be a better investment.

Regarding WWIII, I did enjoy the art, especially the coloring.

Frank, 52 actually wasn't all that bad. I was a comics neophyte when I read it and managed to get through it, then went back and read it again recently. Really it was the Dr. Sivana/Oolong Island storyline that kept me reading it, though. J'onn is hardly in it, though.

Understood, and yeah, dubious at best...one of the things I liked about 52 was bringing Black Adam into his own as a character. Really, I like when villains are given more a life of their own. It makes the heroes world more fleshed out. I mean, most real world adversaries don't spend their entire existence dedicated to each other exclusively. So he'll always be a Captain Marvel villain, but I think Black Adam bouncing off of others like Supes and MM is interesting, especially since his powerset is identical to Captain Marvel. Just fighting the big red cheese all the time, while fun, gets old if done to often.
BTW, good call on the magical Telepathy resistance. Yet another case of writer's not doing their homework, or even thinking that hard about the characters established powers.