The Continuity Blog & The Anti-DiDio League 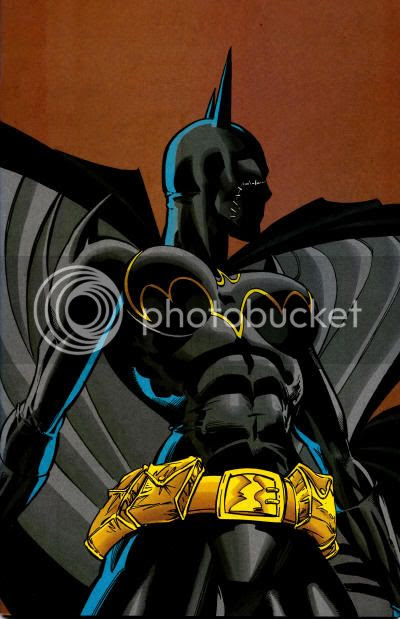 I'd planned to work up a lengthy synopsis tonight, but I'm full of pee and vinegar, so I decided to look for an outlet in that department instead. My February projects have been sidelined so far this month, and since I've only got a few blogs left to thank for their participation in Crisis On Earth-Blog: The DC Challenge, I figure it's about time I got around to seeing that through.

After a holiday break for everyone in planning the event, I tried to get folks fired back up again, but a number of them remained offline without notice for the duration. As I wanted the thing to be as big and weird and convoluted as possible, and after having a lot of folks I'd solicited directly not give me the time of day, I threw caution to the wind with a public offering to all comers across my blogs. This netted exactly two new bloggers, one of whom being dcuboymw, whose The Continuity Blog launched quietly on January 27, 2006. I wasn't familiar with the place, but after a bit of research learned it was a popular destination for folks wishing to locate brief commentary on & summaries of DC Comics. He began with One Year Later Reviews of Aquaman: Sword of Atlantis, Detective Comics, & Outsiders, and has continued for four years and counting!

It's fun for me to read through dcuboymw's posts, because he's such a "Post-Crisis" fan. You see, I got started reading comics in the late 70s/early 80s, as did most of the other DC-character-centric bloggers I know. However, I was rather casual toward DC until I abandoned Marvel Comics in the early 90s, and was myself a devout Post-Crisis (the DC Universe revamp beginning in 1986 that "Marvelized" the line) fanatic for years. dcuboymw's love for that same period is readily apparent, and his view of the DC universe is probably closer to mine than a good many of my contemporaries. However, where my decade long exploration of Martian Manhunter history led me to appreciate the validity of the Pre-Crisis DCU, dcuboymw seems to have registered disdain for DC's regression to those elements, as well as their exploitation of the characters he grew up with as cannon fodder for sensational narrative twists. This led to his creation of a second blog to "spin out" of our event.

The Anti-DiDio League, like the Continuity Blog, calls DC's Executive Editor Dan DiDio on the carpet for the often tasteless and ill-considered changes made to the line since 2002. dcuboymw made his mission statement with Welcome To The Watchtower (NO NOT THE HALL OF JUSTICE) on January 24th of this year. Put simply, he wished to turn back the tide of "heroes I love being pushed aside in favor of boring old Silver Age characters," with his initial spotlights shone on Cassandra "Batgirl 1999-2009" Cain, Linda "Supergirl 1996-2002" Danvers, Green Lantern Kyle Rayner and the Wally West Flash. I personally like three of those four characters, two better than their predecessors, so I was all for this team. Unfortunately, the blog has only seen five additional posts in the last two months.

While the Continuity Blog focused on a Plastic Man trivia quiz that was probably the closest anyone came to how I first envisioned the crossover (including a great "wrong answer" page where the hero looks to be poking you for your misstep,) the A-DL offered The Batgirl Opinion Challenge. dcuboymw has got to be the biggest Cassandra-Batgirl fan I've yet encountered, and he's shown it through his Celebrating Ten Years of Batgirl series, including coverage of Batgirl: May-June 1999, Batman Chronicles #18, Azrael 60, Azrael 61 – Batgirl’s First Christmas, and Robin 73 so far. However, while Batgirl was on hand to punish mistaken answers related to the A-DL, dcuboymw followed a suggestion of mine to use the opportunity to just discuss all the characters being represented in the crossover.

Beyond moving his love of Caine over to the A-DL from his other blog and a brief shout out to Topo, that's all he wrote. As a Didio hater, I hope we get more in the future (especially on Linda-Supergirl, my favorite of the founding four, and a character I hope to use when I finally write my own very late additions to the crossover.)

When I happened across the Anti-Didio League I was happy to see I'm not the only fan out there missing Cassandra Cain. While I'm enjoying the current Batgirl (Stephanie Brown), I'm still missing the girl-of-little-words.

I wouldn't go so far as to call myself a Cassandra Cain fan, but her potential is enormous. I sincerely want her to come back as Batgirl in a big way, as it means more to me to get a Batgirl right than to divert resources to a friggin' Batwoman inevitably doomed to be fridged or reassigned in the future.

Meanwhile, there's the always underwhelming Stephanie Brown, who didn't quite measure up as a Robin. She just needed her suit in a display case. This is overcompensation.