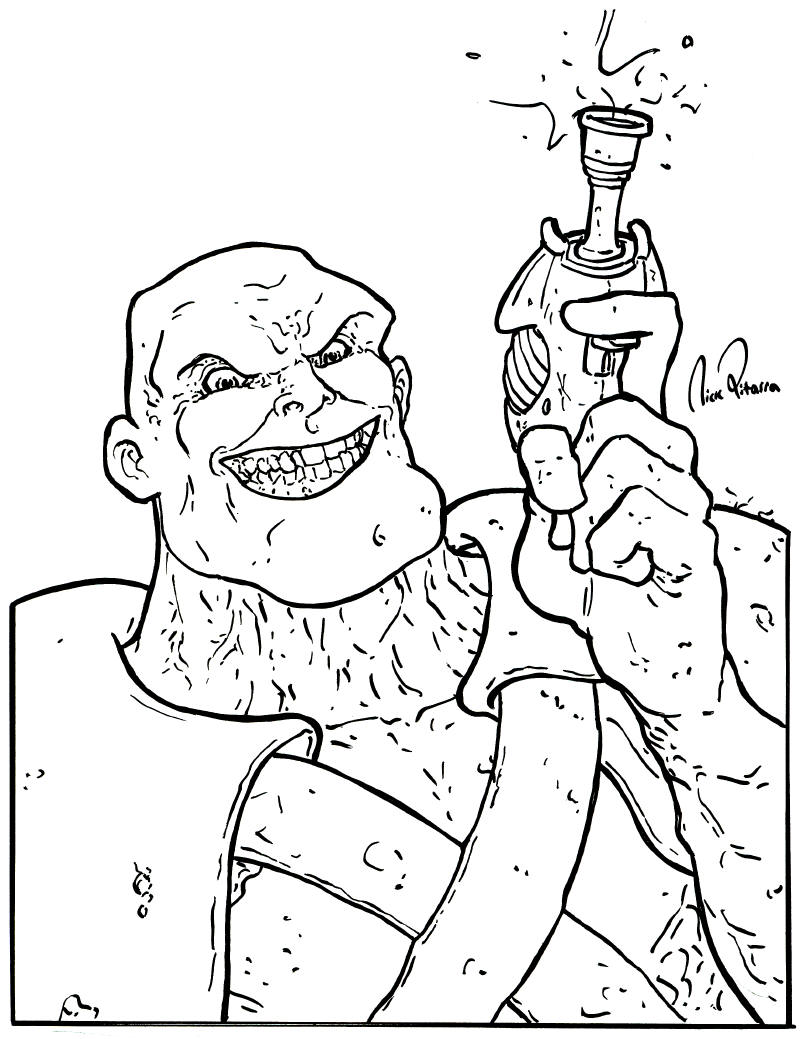 First, the last. Of all my commissions, this is the only one I'm aware of that made it to the internet before I got around to it, so I'm going to chase after as quickly as possible. Appropriately enough, this once again highlights my procrastination.

You see, as I'll discuss later in my (now revere chronological) series of posts for commissions acquired at this con, Nick Pitarra's was the next-to-last piece I set in motion, and the final one collected. Before hitting the con, I ran every artist announced at the Comicpalooza's official site through deviantART and Comic Art Fans to see what I could reasonably expect from those attending. This revealed that there were a number of well known artists to be there with a history of lackluster sketches, and some diamonds waiting to be unearthed among the unknowns. Pitarra was among the latter, so I made a mental note to follow up on him, and he ended up being the only one of that subgroup I managed to locate, anyway. However, as an unknown, I put off approaching him until late in the three o'clock hour. Also, I wasn't really sure who to have him draw, because his art style is really radical. Looking through his samples, I finally made the connection that this was the guy who was going to be doing The Red Wing with Johnathan Hickman at Image. It was cover featured on Diamond's Previews catalog, is much buzzed, and I already had a copy of #1 pre-ordered. Further, seeing pages from the book at full size, I could fully appreciate their grandeur. This guy is a madman, recalling insanely detailed artists like Geoff Darrow, Frank Quitely, Seth Fisher and Flint Henry. I figure he is going to be a big deal in the near future, and I was seized by a need to get something by him while I still could.

Not so fast. I was a little late on the bandwagon, as Pitarra already had a full dance card. To further the taunting, Pitarra was working on another guy's Martian Manhunter commission while we were talking. I was sincere about congratulating Pitarra on his future success and impending rise to stardom, and expressed my hopes that he could squeeze me in. Pitarra recognized that I was into his stuff, and although he couldn't promise me that he would have time, we were both hopeful that he would. 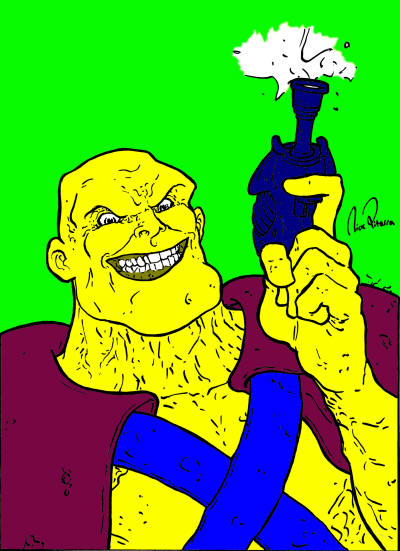 In the past year or so, I've really become enamored with B'rett, the gunslinging yellow-skinned Martian fugitive that tore through Middletown on a vandalism and robbery spree in just one Silver Age story. For my money, B'rett is the best of the many "evil Martian Manhunters," in part because he's not trying to be an arch-anything. The Martian Manhunter is the missionary, so another zealot doesn't contrast him in the way a self-serving sidewinder out for nothing but cheap thrills does. Further, it was B'rett who "outed" the Martian Manhunter's existence on Earth after years of operating in secret, leading directly to his becoming a public super-hero in the JLA. That's more impact than 99% of the Alien Atlas' other adversaries. I was hellbound and determined that somebody was going to draw me a B'rett before the day was through, and once Pitarra found that he could eek out one last commission, he became the guy. In fact, Pitarra was by that point legitimately excited about having the opportunity to go nuts on "evil J'Onn with a ray gun." I had been sticking exclusively full figures this time, but Pitarra said those hadn't been working out for him that day, so he wanted to do a bust. He pointed to a Jonah Hex piece as an example of his basic idea, and I happily agreed. He hoped charging me between $20-25 was okay, depending on how much effort went into it. Yeah, that would be juuuust fiiiine.

B'rett was the last piece begun, and the last done. I was invited to hang out at an adjacent table, where I managed to slit a finger open from a shard of metal under the chair I was sitting on. I do wonder if he thought I was nuts as I tried to stop the bleeding from several feet behind him. All told, I think Pitarra spent 30-45 minutes on the piece, and charged me the full whopping price of $25. If I wasn't literally down to my last dollars, I'd have tipped him up to the $40 minimum everyone else was demanding.

At the same time, I was sort of in a state of shock over the end result. My brain had been hardwired to expect a B'rett from a "realistic" artist all this time, as I'd originally planned. The one I got was totally far out. I just said, "Woe, that's insane" at first, because I had to process it. Of course, as it sunk in, I realized how fantastic the work was, and quickly fell in love. Pitarra was happy with it too, and we discussed my sending him a digital copy of the scan for him to color. It involved some complex process and Photoshop that I never worked out, so I just did my crappy little Windows Paint color fill seen above for now. This guy is going to be a wheel someday, sooner rather than later, but we'll hopefully get to see him do B'rett in color before it's too late. I made a point of getting his business card, and even that was groovy. His name is incorporated into a "Coca-Cola" logo on the front, and one of his hyper-dense pieces is on the back. Dude is awesome!

You can view all of his Comicpalooza sketches (including Ambush Bug!) here, or just check his entire blog here, but don't neglect his CAF offerings. That should whet your appetite for The Red Wing #1 by Pitarra, hot writer Jonathan Hickman, and colorist Rachelle Rosenberg; out July 13th from Image Comics!
Posted by Diabolu Frank at 12:00 AM

That looks amazing. Its better then anything I could picture an artist doing. The ray gun also looks pretty cool. All the things I wish I could do in life drawing is up there, right next to hitting a curveball.

By any chance did you get a Malefic drawing done?

I'm not sure if you saw, but a colored version is already on his blog! FUGGIN' AWESOME!!!

Great artist. Great guy. Quicker than lightning. Jumped the gun on my schedule two for two. So much for playing it coy. I didn't pimp his blog in last week's post because he'd already had a photo of the piece up since last month. Serves me right for sitting on material for so long, but I was vaulting for my last six weeks of school. Expect a commentary track post on Saturday, though.

James, I had to rearrange my schedule, so the Malefic piece won't run for a few weeks. He was the subject of one of my six commissions from that con, and one of the two most expensive.

Thanks again Frank for all the kind words! And Mathmaticsscore...I don't see any colored version over on my blog anymore...b'rett must have evaporated himself with his ray gun. Sorry for jumping the gun Frank...thought I had time stamped that post...its fixed!

Don't be silly, Nick! Put that bad boy back up! I was just teasing about the scheduling, along the lines of the best laid schemes of mice and men. Like I said, I was sitting on the initial post, saw that the art had hit the net, and figured I ought to quit delaying on my end. Then M.C. commented on the color art going up, and I just sort of grinned and went "pazing! Scooped again!" It was especially funny to me, because I'd reedited the post to tease the possibility of professionally colored art knowing full well it was already in my hot little hands, but not already on the web. It's like those old media types trying to impose embargoes on stuff. In the internet age, that's nonsense, so I just amuse myself when I realize I'm being a fuddy-duddy. "I'm sooo smooooth... fart. Oh."

I wouldn't call anything I color professional LOL. Thanks for not going all Martian Manhunter exploding into banana and random fruits on me! Or death ray B'rett on me for that matter. I owe you one!

Dude, you knocked a piece of art out of the park for me on a tight schedule, and then colored it within hours for free. You're golden in my book, plus your B'rett-related "save" raised a chuckle. Any detonations triggered by my hand are wired to the seat of that other guy we discussed.

By the way, your buddy Issac's piece goes up next Tuesday...