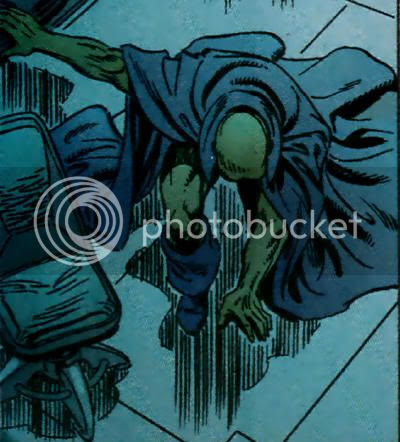 In Baltimore, Green Lantern John Stewart had a run-in with the same young cultist, "Nudge," that had taken control of Superman. Stewart's will was built out of sterner stuff, so Nudge's blue-skinned ally Vortex offered a successful double team. Still reeling from the assault, Stewart found himself with two more "new" metahumans to deal with, the retroactively reintroduced Elasti-Girl and Negative Man (although pretty much none of the characters I've named were actually identified yet in-story.) The newcomers had already been working the Tenth Circle case, and would druther the JLA not muck up there investigation again. Green Lantern reported it all to Batman at the Watchtower. Meanwhile, elsewhere in the JLA's headquarters, the Martian Manhunter knelt down on a laboratory floor. The Sleuth from Outer Space was calling out mentally to the Atom, who had vanished into Manitou Raven's stones. Yes, still.

In a Gotham City alley, the Batman found a police detective trying to wipe away the Tenth Circle symbol from the murder scene. The detective drew on Batman, while two cultists approached from behind. A bullet flew through the Crusader's cape, and he went down...

"The Enemy Within," part two of "The Tenth Circle," was by John Byrne with Chris Claremont and Jerry Ordway. The backdoor pilot that is the second super-team (psst: an ill-fated Doom Patrol revamp) is becoming increasingly obvious in identity. This being the second of three issues wherein J'Onn J'Onzz is left on the floor, calling out for the Atom, might I suggest the Justice League make an investment in LifeCall?

God DAMN I hate Marginalized Manhunter. I was watching the B:TB&TB episodes with the JLA and while Darkseid is invading, J'onn hangs out on the Satellite trying to fix things. Although in the JM Dematteis episode he gets to kick Vampire-Batman ass.

m.c.'s talking about "JLI" episode of Brave and the Bold, Frank, and you HAVE to see it. He didn't do much, but they did a good job of portraying him as he was during the JLI years. (There's even cookies involved...)