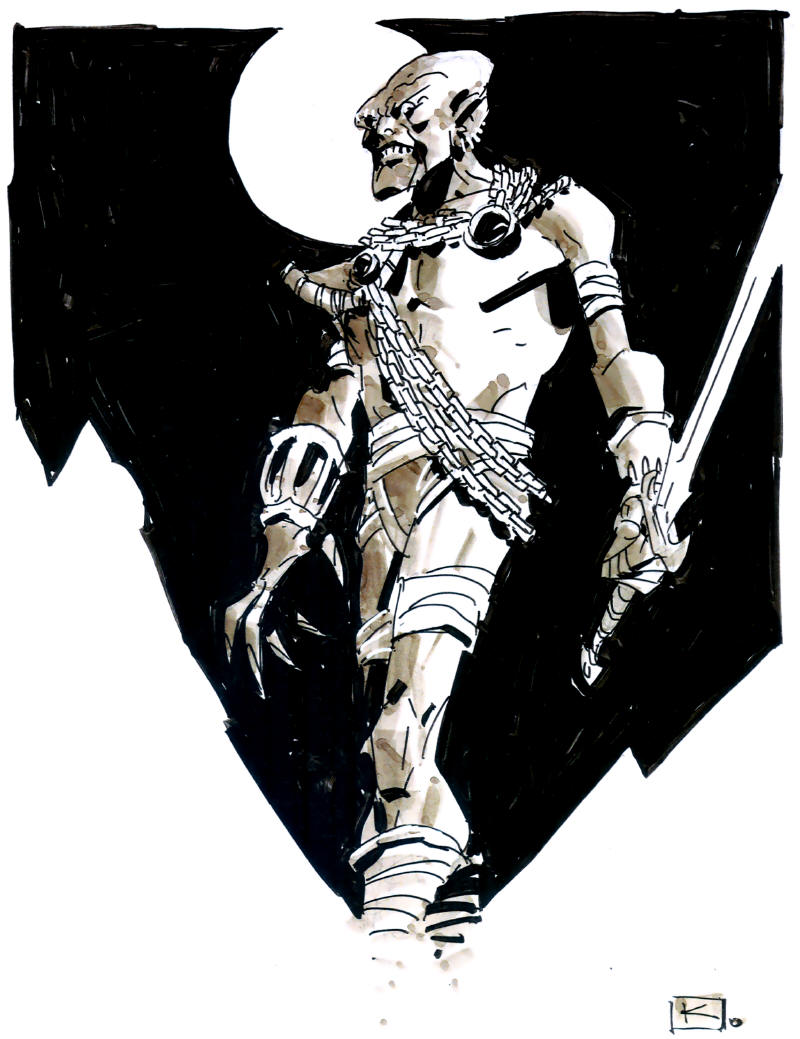 As I've mentioned, I'm on a budget, and art doesn't come cheap, so why did I go to Comicpalooza 2011? Well, obviously it's because I'm totally addicted to these things, and I'm on a mission to put together a "set." The original idea was to get as many Martian Manhunter related characters drawn by as many different quality creators as possible. Now ideally, I'll get a decent job when I get out of school and get more done, but plans are not always realized. I could maybe travel to other cons when I have the bread, but will I have the time, and do I want to lose the "home court advantage?"

You see, even during the comic book boom years, Houston had a bad reputation when it came to conventions. It's hot, we had more that our share of swindlers, it's humid, folks down here want to haggle/bargain hunt, it's sultry, parking isn't great, it's tropical, most of our venues suck, it's sticky, it's a long trip to get to a place with nothing folks want to do in our weather, it's uncomfortable, our transportation system sucks and it's just plain Houston. We don't always have the best of luck getting names, and those who do visit just can't command the dollars that they might elsewhere. We're not the most fannish of towns, and having consulted what folks pay for commissions at other cons, screw that. So I want to catch the suckers the first time they come here, because I might not get a second chance. Also, I do believe Comicpalooza is a pretty solid show for its size and youth.

Another reason to go was because I'd arranged for a specific piece of art to be handed-off there, and was on the lookout for a specific artist on my way up to the third floor of the George R. Brown convention center. Also, I needed to work out the weird new layout of the con. On the way in, I spotted Andy Kuhn on the way out. I saw this as fortuitous, because I had planned to hit three specific artists at this con I suspected would be seated together: Kuhn, the co-creator of Firebreather; Don Kramer, the artist of Wonder Woman ; and Phil Hester, the writer of both. Since I'd already dealt with Kuhn last year, I wanted the chance to yack with Hester specifically before doing the whole "hey remember me wanna do another commission" dance with Kuhn (which I actually hadn't done before, hence the apprehension.

Navigating the needlessly labyrinthine artists' alley, I tried to take notes of which artists were where. The guys toward the head of the snake weren't on my mental checklist for prospective commissions. Part way through, I found the place-keeping sign for the procrastinating artist of 2010. Well, it was only 10:30, so early enough. Toward the end, I ran into Hester and worked out commission #1, then continued to another place-keeping banner for an artist I was interested in. By the time I doubled back, Hester had already told Kuhn I was coming to talk to him about a new piece, so it saved me a lot of awkward reintroductions. See why it's good to scheme?

I've got last year's Dr. Trap commission hanging to the right of my desk, near the patio door. Invariably, when I look up at my framed original art, my eye goes to the Kuhn. The rich black inks against a glossy white background with the red highlights just demands the attention of your orbs, and I told the artist so. This time, I had already decided in advance who I wanted him to draw, which probably made for a much less confusing and frustrating business transaction.

Ma'alefa'ak, also called Malefic, is the evil twin brother of J'Onn J'Onzz. Last year, Kuhn started out with the premise of doing a natural form (at his request) J'Onn J'Onzz barf bag, but then I decided after getting a really favorable quote to go for the full figure drawing. Kuhn wanted to do the J'Onn J'Onzz lookalike B'rett, but I didn't think the character would be recognizable under those terms. This year, I figured Kuhn should damned well get to do a twisted, evil version of Martian Manhunter in a Natural form if he damned well pleased. Handing Kuhn a really nice color photocopy of Tom Mandrake reference, I explained that I recognized Malefic was a character with a lot of excess costuming detail (chains, piercings, straps, etc.,) so the artist could take or leave those elements as it suited him. The main thing was that he draw a really evil looking green Martian, natural form or on Mandrake's model, and to have a good time doing it. Kuhn simply asked me if the pictured costume was Ma'alefa'ak's standard, I said it was, and he was good to go.

Last year, I had requested a commission much too late, and then kind of hovered excessively when my party became hungry and bored. This year, I was on my own, had two commissions locked down before noon, and fully intended to waste the whole day. Truth to tell, I think Hester and Kuhn probably got aggravated after a while with exactly how much time I gave them. You see, I kept passing by their table, trying to spot the two missing artists I wanted to speak to, without really addressing them. I expect they both were finished by lunch time, but I let them babysit my pieces while I did my shopping and made multiple trips out to the car. I finally started going around collecting the commissions about 3:30, and as it happened in the morning, I caught Hester on his own first. Kuhn actually snuck up on me from behind while we were talking, tapped my arm, and told me he had my piece finished. I swear, I'm always a pain in that poor guy's ass.

Hester had told me beforehand that "Andy really nailed it," and I have to agree. In fact, creator Tom Mandrake never quite got Malefic's face to my liking, often coming out looking too clean and similar to J'Onn. I think Kuhn did him one better through the elongated skull, devious eyes, and creepy half-smile. This is the kind of dude that will have mothers of the red planet call their children home from off the playground to avoid. All of the major details of the intricate costume are intact, plus Kuhn offered the subtle but highly effective gray skin tones that somehow evoke a sickly shade of green.

I love how, rather than draw the piercings, they're laid over in white paint. Like visiting a museum, a scan can't do justice* to the physical texture of this piece, thick as it is with layered elements. As usual, Kuhn threw in a background as part of his $80 flat figure rate, so I like to imagine Ma'alefa'ak stalking the mountains of Mars... with his sword? Okay, that last bit was random, but I like it too. If B'rett is J'Onn J'Onzz with a pistol, Malefic can be the Manhunter from Mars that will skewer you. I prefer that to his going all T-2000 with his fingers (not that they wouldn't obviously do the job here.) Kuhn just gets so much character, nuance and motion through impressionistic touches, it's no wonder I decided to blow off my "1 artist, 1 character" guideline to double dip! I was really happy to take this bad boy home... especially since I never got that piece from the other Comicpalooza 2010 holdover. See, that's why I'll make a Kuhn commission an annual tradition if he keeps returning to Houston, and I'll curse that other guy's name indefinitely.


* My scan also faded out a lot of the filled grays, so apologies for the skewed representation. I did my best in that department, and some of the blame comes from scanning a photocopy of the oversized piece from Fed Ex Express.
Posted by Diabolu Frank at 12:00 AM

I love it, as you probably remember I'm a huge Malefic fan. This piece looks so good. I'm glad he did the chains, Malefic just isnt the same without them. You said that it faded out did he draw feet for Malefic and did he say why he drew a sword. Also what images of Malefic did you give him for reference? I's a shame that you still havent gotten your Marshal piece.

Yeah, this rules. You know I love me some barbarism with my super powered Martians, and this fits nicely.

Oh, the stories to be told on savage Mars!

James, you're at the forefront of a batch of Malefic fans who visit the blog, so this one was for ya'll. Comparing the scan as it appears on my laptop to the original, the most obvious difference is that the green tinge to the shading just did not come through. That shading more clearly implied leggings down to the ankles as a series of swipes, and layout pencils invisible here accentuate it, but there are no feet. Actually, there's pencils left over throughout, especially in and around the moon. There are more pronounced streaks in the night sky, with a thick inky texture, and the signature was almost completely shaded in. Otherwise, it's a fair scan.

If I recall correctly, the reference was from DC Villains Secret Files and Origins. It was the "Malefic" one page story and/or his biography page. Point being, unlike another artist I got a commission from, Kuhn did not just redraw the reference. This is a totally original piece of art, including the sword, which I just accepted without question. I guess he looked like he ought to have a sword, and I'm totally cool with that.

The Marshal commission is not going to happen. That sort of imploded after the con, forcing a modest confrontation. I worked everything out with the artist that shall not be named. Just a few hard feelings in the end, we'll say, but it's finally, amicably ended. I had to edit out some venting before these posts published, though.

Are you planning on asking somebody else in the future for the Marshal piece, obviously you already know that its needed with all of your other mm villains. Do you have any more drawings left to show?

Now that the Marshal isn't tying up anyone's "to not do" list, he'll be back in circulation as a commission prospect. I get the best results by figuring out the artist first and the character second, so when I get the chance to work with someone who would be a good match, he'll be around the top of the list. Bob Layton would have been perfect, so that's a missed opportunity for sure.

I have two more commission pieces left to post. One is the last of the six I announced as having come home from Comicpalooza with me, and the capper I received in the mail a few weeks back. It's a doozy featuring one of the Vile Menagerie figures to the right of the blog...