In Hyperspace sat Stormwatch's spaceship headquarters, "The Eye of the Storm." The craft was run by The Engineer, while the team within was led by a new character, Adam One. After a half hour recharge session, the Engineer was annoyed to learn the group had been splintered across three fronts. A giant horn hidden on Earth had been blown to unknown effect, requiring investigation. "The Eminence of Blades," Harry Tanner, was on the lunar surface following up on a possible repercussion, the moon itself engaged in a threatening posture against Earth. Finally, a three man team was in Moscow, hoping to recruit a "potential Superman-level" vigilante.

Despite this frenetic activity and the Engineer's protests, Adam One chose to leave the base with the "Century Baby" Jennifer Emily Quantum to investigate the horn found in the Himalayas. Adam felt it was "the most important thing in the world right now," and needed the horn back at the Eye. "The Spirit of the 21st Century" tested her potentially infinite powers by teleporting the massive horn back to base...

Harry Tanner was cutting down anthropomorphic rock creatures attacking him on the moon, but they were in turn absorbing the energy from his "Blue Blades." The surface gave way under Tanner's feet, and he landed in a cavern with breathable air. Harry was confronted by an enormous eyeball. "I have cut off your communications. I am the first response to the sounding of the horn. I am the scourge of worlds. I am here to make your world stronger, through devastation. You should be afraid... Something is coming. Something huge. I am the only survivor of it. An intellect that animates matter. I arrive long before it, to try to make worlds strong enough to fight it." The intelligence connected with Tanner physically and psychically through tentacles reaching out to his brain. It learned the history of Stormwatch spanning centuries, from the medieval "Demon Knights" to the "Shadow Cabinet" of the dead reigning over their soldier today. It could sense Tanner trying to fight and mislead it, so it determined to make Tanner its latest host body... 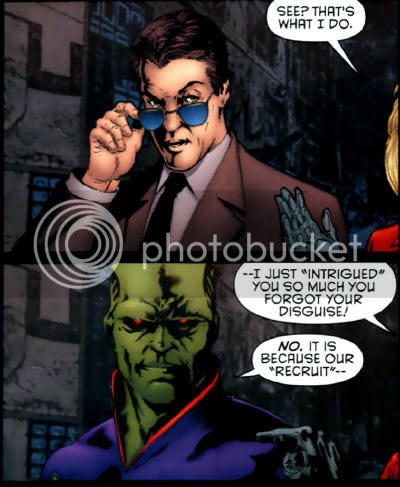 Things were not going well in Moscow, where "Apollo" shattered the bricks under the away team's feet with a smashing blow. "I am NOT a super-hero! And I do not want to join your team!" Apollo was tall and muscular with close cropped hair, the man looked every bit the god he'd been dubbed after by a random girl on the internet. "Apollo" had kept a low profile for a while as a vigilante, but video of his killing a child molester made it to the internet, attracting Adam One's interest.

Jack Hawksmoor explained that Stormwatch was not a bunch of amateur "super-heroes," but professionals tasked with defending Earth from alien threats for centuries. Jack showed off his ability to "control, manipulate and communicate with cities." The Projectionist followed suit by using the "alien language processing lobe that got lodged" in her brain to connect instantly to all known media, or massage it as needed. The final member present was a white male with brown hair and suit wearing sunglasses. Apollo didn't give him the chance to display his powers peaceably before making a break for it. "I don't do huge causes, okay? Please leave me alone."

Apollo went home, but he was followed, and Jack made Moscow disorient the vigilante to keep him from escaping again. "Sorry. I've just been told we can't take no for an answer." Apollo rushed the group, and managed to punch the third member, a green-skinned humanoid alien, in the face. It was Apollo who ended up landing on his backside. "Impressive. I will have to 'slip into something more comfortable' in order to-- equal you." The alien transformed into a Mongolian Death Worm* and forced Apollo to stay on the ground. "I recognize you-- The Martian Manhunter from the Justice League! So this is what you do to people who turn you down?! You kill them?!" The Manhunter explained that this nonsense had gone far enough. 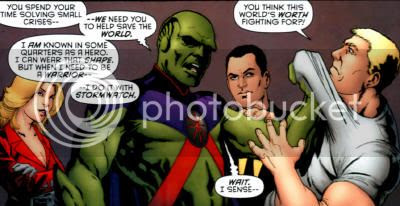 "We need your help-- because you may be the most powerful person on the planet. You spend your time solving small cases-- we need you to help save the world. I am known in some quarters as a hero. I can wear that shape. But when I need to be a warrior-- I do it with Stormwatch." Apollo continued to argue, but the Martian Manhunter sensed something. At impossible speed, a finger tapped Manhunter on the neck like a nerve pinch. A fist pounded Jack Hawksmoor's face. A black bag swallowed the Projectionist's head. All three Stormwatch members laid slack at the feet of two individuals. Apollo asked, "What are you, then? More of the same?"

The man before him was garbed entirely in black fetishistic leather and metal body armor. He reached out and shook Apollo's hand. "No-- I'm the Midnighter. With your help, I can kill every evil bastard on the planet. Interested...?"

*In the first printing, anyway.

"The Dark Side: Part One" was by Paul Cornell and Miguel Sepulveda. I've already discussed the book at some length here, but I will say it holds up to a second reading and is strengthened after having gone over the second issue. I do wish that this Stormwatch more closely resembled the U.N. sanctioned super-team of the first volume, rather than a watered-down apolitical Authority run by some sort of Illuminati. I still like the new characters, but remain bummed the Wildstorm immigrants are so shrill and diminished. I was also kind of put out by the appearance of a lily-white John Jones type, but hopefully the Martian Manhunter will help with racial diversity later on. I think I recall the Engineer being Hispanic, and Adam One may be Arabic, so that may not be a problem, anyway. I like all of the new costumes fairly well, and dig Martian Manhunter's status quo. All those Justice League Unlimited cartoons are retroactively cooler when you imagine J'Onn sneaking away from monitor duty on the satellite for clandestine Stormwatch missions. That was always Red Tornado type crap anyway...

Frank, thanks for the review. I think that the series has potential, but I wonder if Cornell has introduced a lot of the new characters and is getting us to care about them so that there will be an impact if and when there are deaths. I think that we can hope to see better characterizations of the Wildstorm characters and more of a role for J'Onn

I wonder if Adam One is going to turn up bad, or if Cornell is just playing up mental instability/anger issues as a Weatherman-flavored red herring.