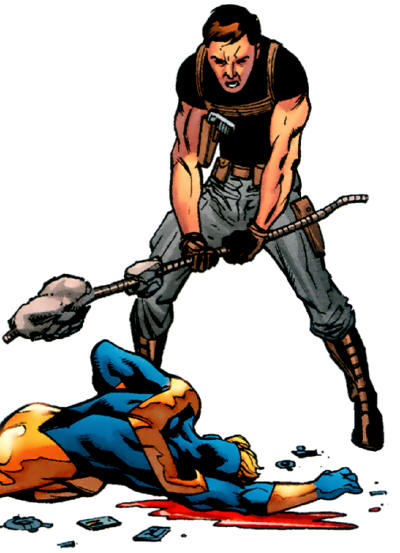 Justice League International started out as a mostly serious super-hero series with moments of levity, before descending into total tomfoolery. Maxwell Lord started out as a murderous, manipulative slimeball underling of a legitimate threat, before ascending into a redemptive if morally gray supporting character. Instead of continuing on a positive trajectory, JLI became a particularly bad example of generic, trend-hopping, painfully overwrought group books. Max Lord, following suit, was turned into the second version of a Dr. Doom knock-off only ever intended to figure into one story. The heel turn totally undercut one of J.M. DeMatteis' better characterizations, but I was never that attached to Max, and he seemed only partially responsible for his newly villainous actions. Since J'Onn J'Onzz was one of the best friends and an inspiration to Lord at one time, I sat back, and waited for their inevitable confrontation.

...and waited some more. "Lord Havok" even had an evil brother show up and get executed by White Martians masquerading as the super-team the Hyperclan, but Max never seemed to spare a thought about fighting the Martian Manhunter. A decade on, DeMatteis was given the opportunity to "fix" Max Lord, restoring him to his former self in a pair of JLI reunion mini-series. Unfortunately, Greg Rucka and others decided to apply an even more ridiculous about-face to Lord, implying that his days working alongside super-heroes were all spent undermining their effectiveness and plotting their demise. Those weren't the same thought balloons I read, but I suppose with a telepath on the team, that made the deception all the more effective. Wonder Woman eventually had to execute Lord to save the world from his threatened mind control of Superman. Gee, I wonder if the Martian Manhunter could have helped out there, too?

So it goes that a perfectly reasonable candidate for the Vile Menagerie, with strong motivation against our hero, got misused and wasted by a heroine who had next to nothing to do with Maxwell Lord. Revived as a Black Lantern, Max pestered Wonder Woman in an issue of a mini-series, then was returned fully to life at the end of Blackest Night. Lord then participated in the pointlessness that was the Justice League: Generation Lost mini-series, which like most aspects of the Brightest Day story arc, was rendered moot by the New 52 line-wide relaunch. Lord spent that series battling versions of Captain Atom and Booster Gold that have now retroactively never existed while trying to kill an alternate version of Wonder Woman that disappeared after a year anyway. Meanwhile, the Martian Manhunter is now a member of Stormwatch who likely never had any association with Lord (or possibly even the JLI, I'm sorry to consider.)

Maxwell Lord has become the textual embodiment of the demands of '90s painfully overwrought and '00s outright transgressive storytelling pummeling the fun, sweet-natured Justice League International to death with a hunk of concrete hanging off a rail of rebar, and I'm glad that J'Onn J'Onzz has washed his hands of any affiliation with this crap.
Posted by Diabolu Frank at 12:00 AM

i recently found in a back issue bin an issue of Brightest Day that went into Lord's past all the way to his teenage years. we found out that his dad was murdered by some corporation in order to keep him quiet. Lord's ambitious nature (spurred on by his widowed mother) apparently has it's origins in a vendetta he has against monster corporations. but of course as you know "the road to Hell is paved with good intentions". we certainly see that with Max who as you know becomes a homicidal megalomaniac.

In regards to Brightest Day, why would we even need to know Max's backstory, is something I don't understand. Especially with a morally ambiguous character--the whole point of being morally ambiguous is not knowing someone's motivations. Having too much knowledge about a character's past kills all the mystery. (But then again, I'm talking about two different incarnations of Maxwell Lord.)

During the JLI's strongest story arcs, Maxwell Lord was a character I had a soft spot for. He was shady, he was a little smarmy, but he was endearing. He was funny! I liked him. (I liked all the JLI characters, for the most part.) It's a shame they brought him back only to...whatever it is they did to him. (I haven't read the new JLI.)

"or possibly even the JLI, I'm sorry to consider." I hadn't even thought of this!! How sad would that be? Ugh.

Plus, even if JLI in some form existed, it's kind of hard to enjoy the comedy when it's coming out of the mouths of murderers and victims. "HAH! What a great line! Too bad you're going to die in a fire with your unborn child!" It casts a bit of a pall, doesn't it?

It's funny how characters with out a distinctive "look." are treated more as plot points than characters by some writers.

Frank, I was unable to pick up Stormwatch#1, but I understand that there are some referenaces to J'Onn being in the Justice League.

A battle between J'Onn and Maxwell Lord would make sense, with a story line showing how an alien can be more humane than a member of homo sapiens. Unfortunately, DC seems to miss many opportunities for good stories. So, I guess we will see how much remains of Maxwell Lord in the DCnU? (Did Ted Kord ever become the Blue Beetle?)

M.C., I'm not sure what you mean about the "look," but God knows how often B-listers and supporting cast members get thrown under the bus by writers who barely know them or have no connection to them for the sake of "the grand design." Both Max's heel turn and Beetle's murder were orchestrated by writers who had never previously written either character in a significant capacity. How loud do you figure Johns would squawk over SSK, or Rucka Renee Montoya? I don't figure Winick has a deep enough affection for any of his characters to draw a parallel.

Will, I'll be writing up Stormwatch #1 in the coming weeks, but it did confirm Manhunter in the Justice League, at least at some point...

Maxwell was terribly treated by writers after Giffen and DeMatteis.

How hard can it be to get that a character is sleazeball? I think that Gerard Jones and Greg Rucka must have some sort of mental impairment. One really have to have a really obtuse mind to confuse slimy with murderous and psycopathic.

I think that tptb at DC really hates the Super Buddies.

Rafa, I never got the impression Jones had much love for Max, explaining his death and villainous return, but I don't feel like he was all that bad to the character. Max's illness and death were fairly well handled, and it seemed pretty clear that the Kilg%re were most at fault for Lord Havoc. I figure it was all in service to melodrama and would have ended with a redeemed Max if played out fully.

Dan Jurgens was the guy who really brought the hate at first, poisoning the character through Superman's condemnation. I doubt Dan Didio has any love for the JLI, and Rucka fell in lockstep with particular glee.

What impresses me is how close Giffen works with DiDio without getting any bone.

Then again, although Giffen and DeMatteis are admittedly what I call conservatives (people who don't like killing or derrailing classic characters) they are not the type that like to pull resurrections. The same goes for Dini and Waid. Johns and Simone seem more comfortable doing so.

Ted and Dmitri seem to be out, but I hope the DCnU restores Max and the Dibnys back to normal, like they did with the Ventriloquist, Babs and Roy.