The Vile Menagerie: THE HUMAN SQUIRREL 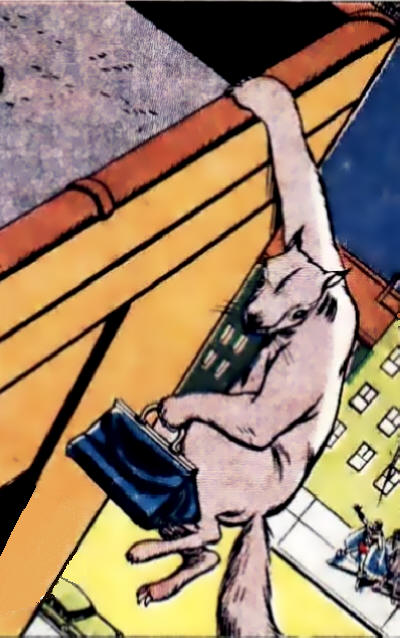 History:
Ben Stoves was a notorious bandit who performed daring acrobatic heists in highrise buildings before being brought to justice. After being released from prison, Stoves chose to retire his Squirrel costume and turn over a new leaf. As part of a rehabilitation program founded by Middletown Police Detective John Jones, Stoves proved one of the most loyal members of "The Ex-Convicts Club." Unfortunately, gang leader Biff Benson needed the Human Squirrel for a job he was planning, and so framed Benson by having a another crime committed in the Squirrel costume. In order to clear his name, Stoves and fellow ex-convict the Trickster pretended to join Biff Benson to recover the loot from the frame-up job. With the help of the Martian Manhunter, both men were vindicated and Benson's gang took their place behind bars.

Powers & Weapons:
Aside from his acrobatic prowess, the Squirrel was not known to have any special abilities or tools.

Quote: "How will we be able to go straight without those jobs the club was getting our members?"

If the Human Bomb, the Human Squirrel and the Human Falcon joined forces, what would they call themselves? (There is already a comic book team called The Losers.)

The Human League (Battle Cry: Don't you want me ooo-ooooooo?)

So... it's just a squirrel costume? And he climbs buildings wearing it?

We never actually get to see the Human Squirrel in action, remember? He's an imposter with the abilities of the Human Squirrel, which include committing crimes in a mascot's costume without having to be led by the hand by a helpful park attendant or needing water every fifteen minutes.

The Human Squirrel VM writeup is here? My day has come!!

And "The Ex-Convicts Club" just adds icing to the cake.

When I get to write the Martian Manhunter ongoing series, I'll be sure to offer a completely deadpan series of Human Squirrel stories for you. No overt chuckles like Squirrel Girl or Ambush Bug, but the ironic hilarity of writing absolutely straight stories about a daring rooftop burglar in a bulky, expressionless squirrel suit.

Deadpan: yes. That is exactly what I want out of a Silver Age revival series.

It would be like a non-ironic Buster Keaton movie instead of goofy Harold Lloyd film.