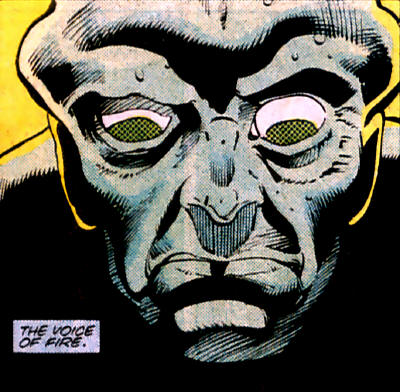 History:
On the grandmother of J'onn J'onzz:

"When he was a boy on Mars, his grandmother told him tales of H'ronmeer, the God of Death... and Fire. How Grandmother's stories thrilled and terrified him! How often he imagined glimpsing H'ronmeer himself, a shadow among shadows, dancing through the warm Martian nights!

Grandmother, so many years gone, so long unremembered, fills his thoughts now. He weeps for her. For a moment, as the flames draw in closer, as the heat drains his strength, he thinks he hears her, calling him. He rises and calls out in answer. But Grandmother isn't there.

'Are you ready, J'Onn J'Onzz-- to leave this world of strangers? She's waiting. Will you come?'

Note: The above image was most likely intended to be a H'ronmeer prototype. Since this in no way resembled the version later established by Mark Badger, and J'onzz's grandmother was being referenced, I co-opted it.
Posted by Diabolu Frank at 12:00 AM

I don't remember ever reading an appearance of grandmother J'onzz...! Do they mention other family in JLA #256 or just her?

By my recollection, just her. I'm reading the 1988 mini-series now, and they dropped some bombs about J'Onn's parents that the reboot immediately reversed.