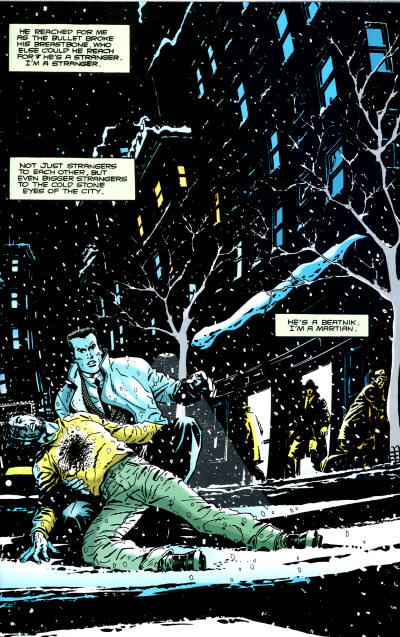 "He reached for me as the bullet broke his breastbone. Who else could he reach for? He's a stranger. I'm a stranger. Not just strangers to each other, but even bigger strangers to the cold stone eyes of the city. He's a beatnik. I'm a Martian." The scene was a street corner on a cold winter's night in New York, 1959. Denver Police Detective John Jones was in town for a forensics convention. The bleeding beatnik told Jones "It's the dogs. The dogs who...see inside," before dying in the incognito alien's arms.

Police soon arrived, as a witness informed Jones that the beatnik had been chased out of a nearby cafe. "Procedure would be to let the local cops check the story. But I feel something in this. Something that no procedure can cover." After asking a few questions, Jones decided to sit and observe the goings on at this bohemian establishment. Open-mic poets rambled apparent nonsense, while he noted an older gentleman at a table jotting lines on paper. A folk singer preached resistance as Jones departed, wondering about seemingly casual mentions of a supposedly omnipresent game show called "The Big Question." 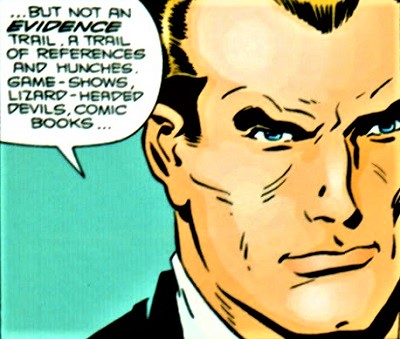 Returning to his hotel room, Jones deflected a bellhop's attempts to solicit "companionship" for him, preferring a glass of milk and the boob tube. "This is what the cold brings. Companions on order... Contests so they can cheer for the meaningless victories of strangers. Manufactured families. Staged communication. It's a cold world for a stranger. I'll look for my own warmth. My way. The Martian way. I remember little of my world, of my past life. But in moments of peace I remember a warmth. I remember a silent companionship. But peace is short here. And suddenly I can't even remember the warmth." The cold and warmth are a concern for Jones' questing mind throughout the story, referring less to the snow falling outside than that of the heart. He watched the television; visited bars; glanced at pornography; trying to understand the nature of these temporary respites from loneliness men cleave to.

Exploring the 50's game show scandals two years before the much-lauded film "Quiz Show," Jones continued his investigation invisibly at the filming of "The Big Question." The show was rigged, but one obstinate contestant refused to request the question category, "horticulture" that had been fed to her. Before a live studio audience in a heated booth, her head exploded. As the mess was quickly cleaned up and attributed to technical difficulties, an invisible Manhunter spied a woman threatening her pig-tailed daughter. "She said the wrong thing, Patty Marie. You won't say the wrong thing, will you, darling?" The contestant's identical duplicate then entered stage left, pushed the corpse aside, and picked up where the original left off. Into her session, however, the duplicate spotted the incognito John Jones through unknown senses. "Him! He isn't one of them! He sees!" Racing from the scene, John Jones noted to himself, "And she sees... what no human can see." He also noted the reappearance of the older gentleman from the beat club in a station hallway, and followed that lead out. 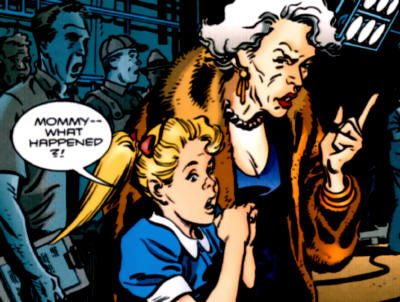 The gentleman led Jones to a diner, where he met and turned out fading pop singer Eddie Lowe. "These kids don't know music. You give them a Negro beat and they think it's all they need. Now you know I have nothing against the Negroes, Phil. Our people, we have a spiritual kinship with the Negro. We're all exiled people, Phil." The gentleman replied, "You're exiled...Exiled from the Hit Parade, you are." As the singer stormed out, Detective Jones materialized to step up to the gentleman. "Didn't mean to eavesdrop...but you're in the music business, aren't you? I need to ask some questions." The older man, Phil Jerry, was less than helpful. However, the arrival of hot new music sensation Perkins Preston, an Elvis analogue, was illuminating. In the midst of listening to the country boy ramble about writing to his mama regarding the sinful big city, the mention of "lizards" caught Jones' attention. Pulling out a religious comic strip pamphlet given to him by a "holy man" in the New York streets, Preston stated, "He knows the end in store for us all." 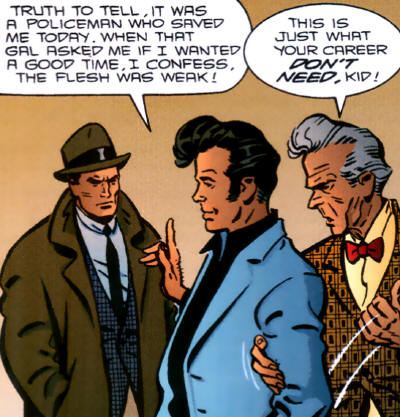 On finding the aged zealot, the detective was informed, "Satan is a lizard! I can see him, that's why he torments me. That's why he had me thrown out of Nuts." This "Nuts" was revealed to be the Mad Magazine-type humor publication of one Melvin Keene, complete with gap-toothed mascot. "I put the lizards into all my pictures," said the former cartoonist, "to warn people. But Satan made them fire me." Perusing a copy of "Nuts" at a newsstand, Jones noted a parody called, "The Big Kvetch-tion" where a contestant fervently asked for the horticulture category. Jones also noted a conspicuous zeppelin above the caricature's head reading, "ZOPRBETIE".

On his way back to the hotel, Jones stopped at a corner store for some Oreos, but they only had Hydrox. "Tell me. Why are there two of everything here? Or more. Hydrox and Oreo. Ford, General Motors, and Chrysler."

At the forensics convention, Jones talked a bit about his odd case, to general derision as a misguided yokel from Denver. "I've been following a trail... but not an evidence trail. A trail of references and hunches. Game-shows, lizard-headed devils, comic books..." That line got the attention of a lean, mustachioed, plainclothes officer named Jim Swift, who insisted on knowing where Jones was staying while in town. 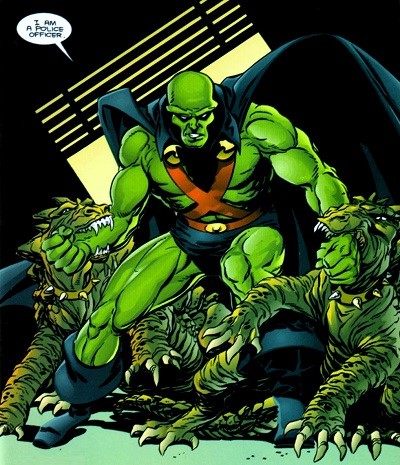 That night, the Martian sat in his hotel room, watching a detective show on television, while in his natural form. "This is why I became a cop. Stranded on this world, I wanted to be among its heroes. These were the heroes the culture showed me. There were other heroes before, I've heard. During Earth's last Great War. But like all war heroes, they've faded. Except the ones who chose to become something other than heroes. There is so much they don't tell. Is that why I became a cop? To learn what they don't tell?"

A knock came on the door from Swift, offering information on Jones' case. From behind the door, J'Onzz repeatedly refused Swift for the night, at which point the officer announced, "I'm coming in, Jones." A lizard-like version of Swift joined two reptilian uniformed officers in bursting through the door. The policemen released twin saurian hounds from their leashes to seize the lanky Martian's arms.

"What are you?"
"No, John. I'm the local cop. I ask the questions. So what the hell are--What?"
The Martian transformed from his natural form to the familiar Manhunter visage, tossing the hounds into their masters. "I am a police officer." In the struggle that followed, a smashed television set the hotel room ablaze, revealing J'Onzz's weakness. The Manhunter flew through the roof to make his escape, then did some digging to find Phil Jerry at Royal Records. That same night, J'Onzz overheard mafia thugs commanding Jerry in his office, "Need another Preston Platter... for the jukes... Word's come down... All the way from Cuba... We'll tell Mr. Gioconda you're working on it." 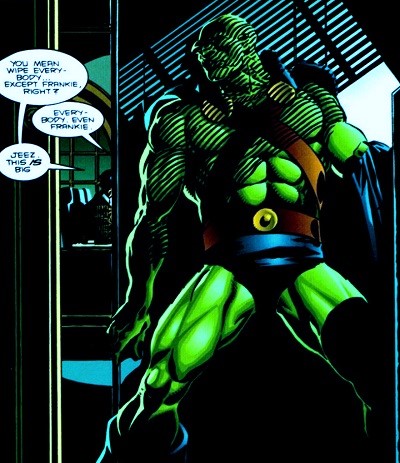 When the thugs left, Detective Jones entered to grill Jerry. Apparently, he did too good a job, as Jerry spontaneously combusted once he began leaking information. As Jones backed away from the flaming corpse, he bumped into an excited Perkins Preston. "The lizards! They--Oh Lord! They did it to Mr. Jerry!" Detective Jones hauled the young rocker out of the building by his arm, asking questions the whole way. Suspecting a police dragnet in the works, the pair needed a discreet way out of town. What they got was Preston's pink Cadillac, complete with "The Big Question's" Patty Marie hiding in the back seat. While narrowly evading a pursuing car and lizard-police gunfire, Patty confessed, "Mother was going to give me to the lizards! I ran out of the booth! I had to hide!"

Hours later, Patty Marie had cried herself to sleep, and Jones contemplated the group's future course. "Strange. The first thought that crosses my mind is the trouble I can get into by taking a runaway minor across state lines. Maybe I've learned my police codes too well." Preston noted a freeway exit to Leavitzville, and took it. "My mama talks about the suburbs all the time! Like a small town--Only new and improved! Nothing'll hurt us there."

This is a great series and I hope that it can somehow stay in the new continuity. I would like to think that regardless of how the history of Mars (good post on that one, Frank) may be changed, that J'Onn J'Onnzz has been helping humanity since the 1950s. Maybe whoever takes over Stormwatch can refer to this as a case happening shortly before J'Onn joined the team.

My favorite Martian Manhunter book, ever, and quite possibly my favorite comic, period. I can't say enough good things about this book. The tone, the art, the characterization, the subtext, the setting, the dialogue. It all comes together so subtly and yet so well.