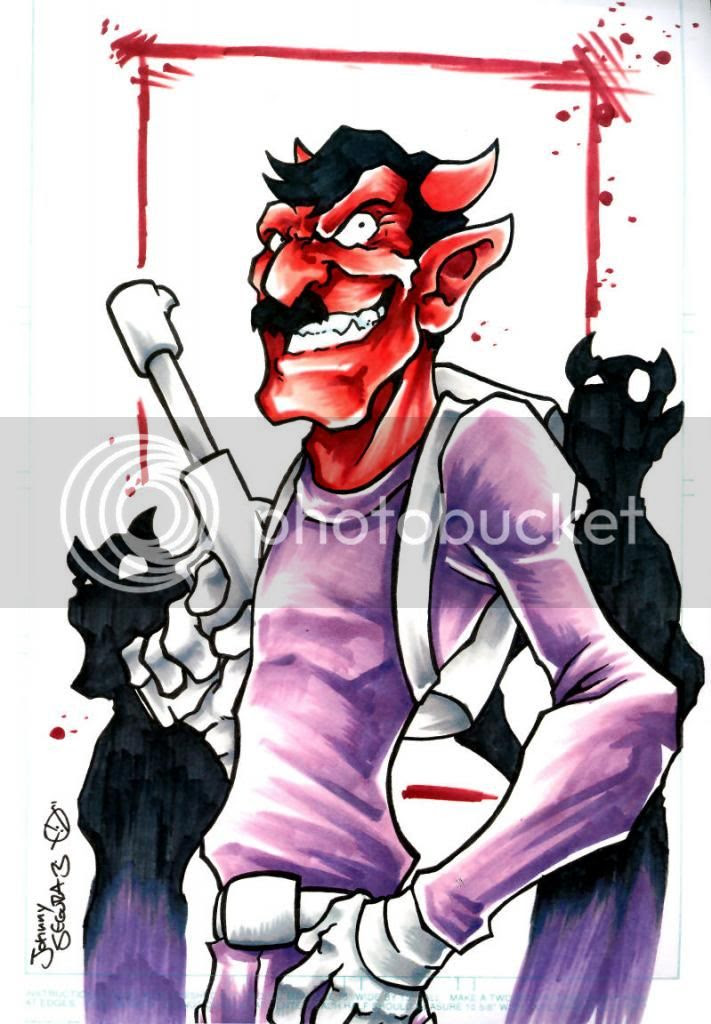 From his biography at Wizardworld:


Johnny J. Segura III was born in Lake Charles, Louisiana, which is where he has stayed more or less his whole life. He always loved comic books and video games. Johnny studied commercial art until he got tired of his teachers telling him every day that his art style was a dying fad and he needed to learn how to get a “Real” drawing style. After he dropped out of the COMA course he then started working at a tattoo studio, which is where his art really took off. Having to learn to draw quick and detailed really helped him define his current “Western Manga” style. After developing Carpal Tunnel due to 8 years in the tattoo industry, Johnny was faced with the decision to either keep tattooing or continue drawing. He has spent the last 2 years refining his comic art skills. Joe Mad, Humberto Ramos, Kouta Hirano, and Ryan Ottley have influenced him greatly. Billy the Face and Pipe Dreams: A Tale of 2 Plumbers are his two most recent self-published comics.

One thing I decided to do at Comicpalooza was to have artists responsible for producing multiple commissions take their pick of the final day's subject. After Professor Arnold Hugo and Scorch turned out so well, I figured artist Johnny J. Segura III had earned the option. I handed him my stack of reference, and after a fair bit of whittling away flagged pages, finally chose the Devil Men of Pluto.

At the same con, I'd already gotten the Devil Men drawn by Paul Maybury, but they seem to be a popular group with readers here. Also, as much as I liked the piece overall, Maybury's take on squad leader L'lex Xanadar seemed a bit too bulky to jibe with Joe Certa's model. While the other two Devil Men are silhouetted in the background, Segura seemed to zero in on a take of L'lex that feels closer to the comics while still being stylistically far removed. His manga flavored approach is contemporary and appropriately over the top. Fans reacting to the piece liked it, but unsurprisingly didn't recognize the character "Neither did I!" Segura responded, "But, it was a Hitler Devil.. I Had to do it!"

Unlike the other Segura pieces, and as evidenced by this photo, the scan was reasonably representative of the art. The original is lighter and a bit rougher, plus I had to trim out about a centimeter at the bottom that cost L'lex part of his fingers. At 11" x 17" on my '90s Blue Line pages, it's a big hunk of sweet color imagery!

Segura's wife never did get around to reading that issue of House of Mystery, but she really dug scoping out the archaic ads and retro designs. She also thought the references pages I was using were happening, and asked if she could have copies for inspiration. My paper ones were a tad too expensive to give away, and I never did send the couple an email with digital copies, but maybe I'll finally get around to it now that I've offered Segura's last piece for the moment. Barring that, there are still oodles of characters I'd like Segura to draw, so forwarding the reference for future commissions is always a possibility!

Check out more at the artist's deviantART gallery, or if you want to mortify him, his ancient Tripod site The Badass art of Johnny Segura. If you'd like to get some pieces of your own done, order his $40.00 8.5 x 11" or $120.00 11 x 17" eBay commissions! I have every confidence that you like me will be glad you did!