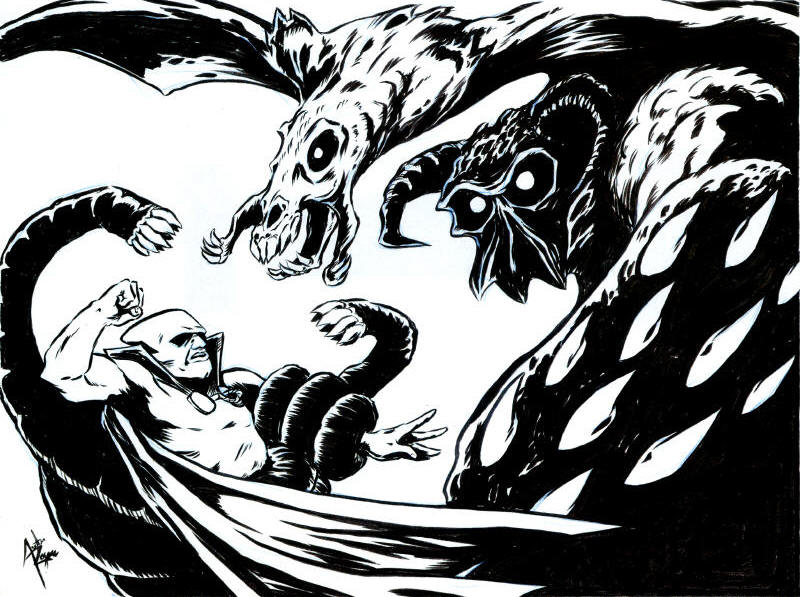 I'm probably the world's biggest fan of the six issue JLA: Scary Monsters mini-series, but let me assure you that it is by default. Well, second biggest. Maybe third. I probably need to qualify this. See, I grew up on Chris Claremont X-Men. His forced departure from that family of titles marked the point where Marvel Comics became "broken" to me, which was why I transitioned into hardcore DC fandom for the rest of the '90s. Claremont was on a career high at the time following a few years of mediocre stories, and he's never been able to recapture that spark. Whether it was his pathetic wannabe "edgy" return to X-Men or the embodiment of every criticism of his idiosyncrasies dubbed Sovereign Seven, it would be fair to say he proved his detractors right a might too often for his career's health. On the other hand, for better or worse, Claremont taught a whole generation how to write team books, and he can still bring that talent to bear at times. Scary Monsters, for instance, bucked the trend of risible JLA cash-in projects that helped beach the whale Grant Morrison birthed by telling an interesting, sometimes even harrowing story that well balanced the Magnificent Seven icons against a monumental force while offering a solid new heroine and neat wrinkles in mythology besides.

Unfortunately, the mini-series sold half as well as the ongoing, and was overshadowed by its highly similar story running concurrently. The JLA is torn apart by a demonic entity with ties to the genesis of Martians' energy projection powers. A JLA member is possessed, turning on their own people. The Martian Manhunter's intimate relationship with a young human woman possessing fire powers is key to saving the day, but at the cost of their love life. Trial By Fire even shared an unusually heavy presence for Plastic Man in a serious role. The difference was that Scary Monsters expanded Martian lore while allowing the hero to be competent and essential to the narrative. Trial By Fire determined that Mars as we know it was created by the Guardians of the Universe, annexing Alien Atlas lore under the Green Lantern heading, while making J'Onn a victimized boob in an unsettling relationship that only asserts some self-control in the final pages. Scary Monsters might have just been pretty good in a vacuum, but compared to the Fernus fiasco, it was high art. Also, I think the Scary Monsters are rather keen, and I want to see Kishana Lewis turn up again sometime.

Unlike most of the pieces I get, I couldn't ask for a simple pin-up. The Scary Monsters took many forms, which kind of begs for a multi-figure drawing. Ideally, the Martian Manhunter would also be involved, and there would be some sort of scenario playing out. That meant that I needed a "scene" artist that wouldn't charge me a c-note per figure, preferably someone who could do weird or scary to sell these creatures. I had a few different artists in mind, some of whom ended up "assigned" other characters, and at least one guy that I dismissed as a sleazeball who did end up managing to rip my girlfriend off for $65 on a commission I'm positive he hasn't started five months after pocketing her money. Thankfully, after navigating all those potentialities, I ended up with Austin Rogers, who did a fine job.

Rogers goes by the nickname "Redbeard", which he also uses as his comic publishing identity. I could tell that he was into super-heroes, sci-fi, and horror from his art gallery, which was the proper combination to make this thing work. It also meant that I could explain the premise in shorthand. "They're like Deadites crossed with Xenomorphs, but more furry/woodsy/prehistoric." Reference and a bit more detail was obviously necessary, but the point was conveyed. I wanted several flavors of monster, and Redbeard was very accommodating. He asked me if it was okay to have a central heroic figure for these guys to surround, which I had in the back of my mind anyway, but had hesitated to mention because I thought it might be demanding too much. Redbeard was totally cool, although I had to reenforce a few times how much freedom he had in interpreting the characters how he pleased. "I was talking to another artist that is very concerned with getting every detail of a character right based on their published appearances, which is swell, but I want you to do the exact opposite. These guys are always obscured by lighting and angles, so you can do them as silhouettes if you want. Do not sweat the details on this at all."

A few hours later, Redbeard texted me that he was done. From blue line frame to pencils to inks, this bad boy was built up into a fantastic 9" x 12" that I'd love to send out for coloring and print. How awesome is the hulking horned mammoth taking a heavily spiked swing at the Alien Atlas? The satanic pterodactyl got the most detail, and those fangs are serious. I dig the indie Manhunter slugging it out with a tentacle threat, and now I want to do one of those "one minute later" commissions with a possessed J'Onn J'Onzz staring evil at the viewer. This was a steal at $90, so I hope to enlist Mr. Rogers for another next year!
Posted by Diabolu Frank at 12:00 AM

Thanks for sharing this, Frank! Sorry that I have been silent of late, but I have been busy. Any thoughts on reports of a new Justice League movie coming out in 2015?

It'll have to fend off Star Wars as well as The Avengers? Not very optimistic.