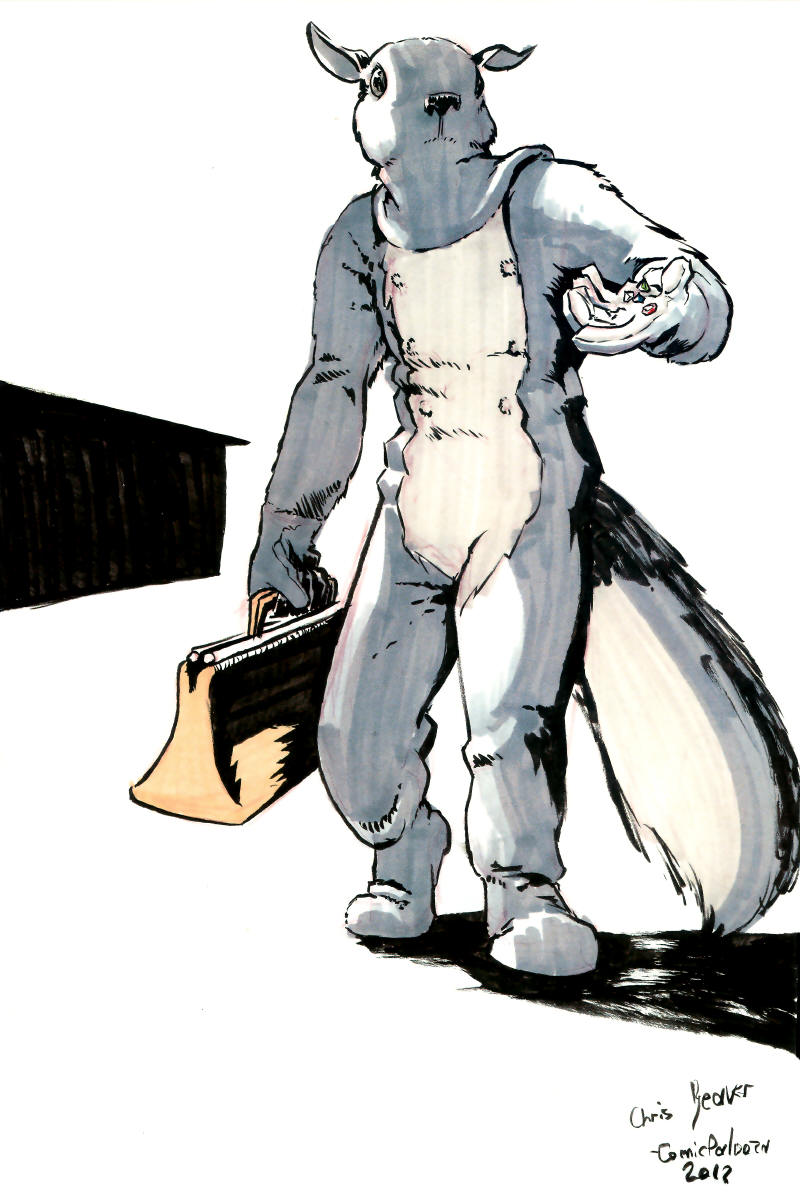 My final Comicpalooza 2012 commission, posted on the eve of the 2013 convention, is one of my favorites of the entire collection. Ahead of the con, I'd settled on asking Beaver to draw Hunter Commander J'en, which didn't end up coming to pass until later that year when we met up again at Space City Con. I'd been going back and forth on having him draw Ben Stoves, since Beaver had a habit of doing cute drawings of his namesake rodent, and even one scary high contrast "chiaroscuro" version that might look cool applied to the Squirrel. There was another artist who specialized in boss furry anthropomorphics though, and Beaver had a great way with lifelike ladies, so I thought the matter was settled. The other artist had a great concept for the Human Squirrel, but the execution was hampered by her restricting her con pieces to $5 quick figure sketches. Her piece whet my appetite for more Human Squirrel, so I took a second shot with the character at the same con. 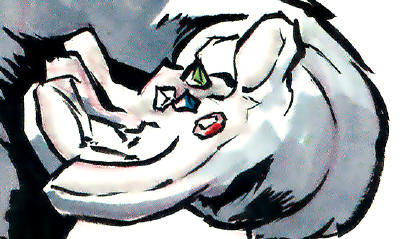 I don't recall how long it took me to identify Chris Beaver at the con, since I don't remember if he had any big identifiers at his table. Once I did find him though, I told him all about his virtues as mentioned in the J'en post, as well as the stuff I just stated in the previous paragraph about my thought process. Beaver is a quiet, unassuming sort, whereas anyone who has listened to my guest appearances on The Fire and Water Podcast knows I've naturally got the tongue of a cokehead, so he just nodded and looked a bit like a deer caught in the headlights of my verbal onslaught.

When I came back for the $40 piece, I was delighted to find it in color on industrial board. The expression on the Human Squirrel's face is priceless! While taking the heist bag straight from the provided reference, Beaver changed up the color and perspective to make it his own. I adore how squirrel-like the figure is while making it plainly obvious that this is a man in a velveteen suit with visible seams on his mask, gloves, and even what appear to be buttons on his chest piece. Showing off the jewels he swiped in his furry paw, there's a strange innocence to the character-- communicating in one image the insanity of the concept of a second story man in a mascot costume who would later turn over a new leaf and go straight. Even the vague silhouetted structure in the background recall's Scipio Garling's Magical Tudor Barn. How perfect is this thing?!? 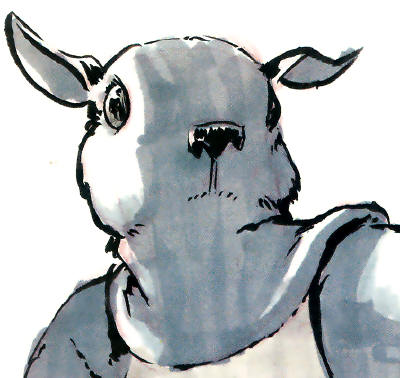 My two best friends attended Comicpalooza, and have long histories with the funnybooks. Even my girlfriend gets into this stuff, and we all have strong, conflicting opinions about what does and does not make for a great commission. It's a rarity when we all agree on something, but all four of us dug Chris Beaver's piece and see it as a highlight of my commissionary adventures. I've got an 11" x 17" color duplication of the original art framed on the wall at eyeline with my desk, next to Brian Denham's Bel Juz and both beneath the Alex Ross Martian Manhunter poster, forming a trifecta of negative space awesomeness where the figures pop like mad. Sweeeet!

I don't know if Chris Beaver will be back in town, but his publisher will have a booth, so we'll wait and see. In the meantime, visit his deviantART gallery!
Posted by Diabolu Frank at 1:00 AM

Cooooool. I've got it on order, and it should show up late next week/early June. I did read the JLofA #3 back-up. Awful Catwomany for my taste.

the art sucked. wish reis was doing it for that issue