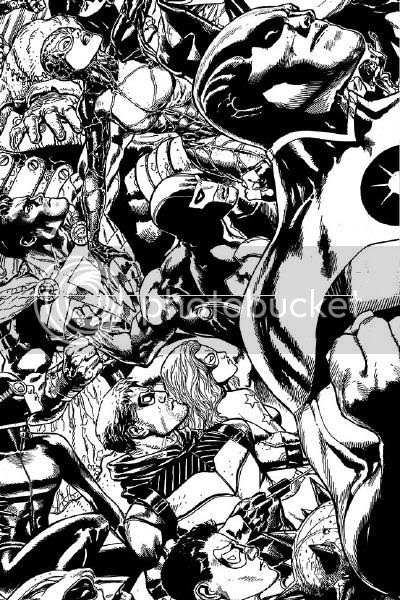 I'll talk about all those likely cheesy Trinity War books I'll probably still buy in a minute, but I have something to say first. I'm looking at these Arkham City action figures, along with the Infinite Crisis Atomic Wonder Woman statue, and I simply find it all friggin' repugnant. It's like Juggalos have taken over the design aesthetic of DC Comics. Generations to come will laugh at how vulgar and stupid we were for putting up with this crap. Just because super-heroes have gone mainstream doesn't mean it's okay to pander to literally the lowest common denominator of all possible audiences, and will either drown in fail sauce or push the entire medium back into the grimiest ghetto of popular culture alongside furries and the oeuvre of V. C. Andrews' ghost writer.

TRINITY WAR CHAPTER 4! The hunt for a murder suspect leads Superman and his new teammates to the secret behind the Secret Society, while Batman finds the key to the crime—and one of the Leaguers will be forever changed by it. Plus, who is the Secret Society of Super-Villains and what are their plans for Pandora?

I don't like Mahnke's six-pointed starburst in space Martian Manhunter chest insignia as much as the red/gray/black "pie chart" one most commonly seen in the New 52, but it's way better than Dave Finch's "shower flower sticker." Also, I'd quite like to see Mahnke do the JLA again in the more realistic style he's developed with Christian Alamy.

TRINITY WAR CHAPTER 5! The Justice Leagues continues to fracture as the murder of a hero is solved—and the line between justice and vengeance blurs as they head off to find those responsible!

JUSTICE LEAGUE #23
Written by GEOFF JOHNS
Art and cover by IVAN REIS and JOE PRADO
Cover by DOUG MAHNKE
1:25 Variant cover by MIKAL JANIN
1:00 B&W Variant cover by DOUG MAHNKE
On sale AUGUST 28 • 40 pg, FC, $3.99 US • RATED T
Combo pack edition: $4.99 US
Retailers: This issue will ship with four covers. This issue is also offered as a combo pack edition with a redemption code for a digital download of this issue. Please see the order form for more information.

TRINITY WAR CHAPTER 6! Trinity War concludes! But that doesn’t mean all ends well for our heroes. The secret behind Pandora’s Box is revealed and it means the end of the Justice Leagues!

A “Trinity War” tie-in! As both the heroes and the villains continue to hunt Pandora down, she makes a crucial decision involving the Seven Deadly Sins, one that will affect the entire world…

So this is all a Shazam thing?

The key to ending “Trinity War” may be the soul of a murdered Justice League member, so the Phantom Stranger must lead a covert team—including Batman, Deadman and Katana—into the afterlife to try to retrieve it! But the Stranger made a promise never to return to the afterlife— and when he breaks that promise, he’ll find that the Hosts of Heaven are all too eager to dish out his punishment!

At first I was all like OMG, they killed a secret Leaguer within the five year New 52 timeline. Then I remembered that they're going to kill somebody in Justice League of America #4, and here's where they'll either be resurrected or have their requiem. Vibe? Steve Trevor?

Afraid that A.R.G.U.S. has been lying to him, Vibe goes on the run! But he doesn’t get very far before a new villain with ties to his past threatens to turn his future upside down!

Is that what the New 52 Gypsy is going to look like? Ew. Hopefully, New 52 Reverb means cancellation comes with #8.

The War of the Justice Leagues is here—and now, DC Comics presents the first chapter in this epic event in a new Director’s Cut, featuring Geoff Johns’ original script from JUSTICE LEAGUE #22 and Ivan Reis’ artwork presented in pencil form!

I wasn't a big fan of this event, which was painfully bloated and unfocused, plus I hated the art of Val Semeiks on the core mini-series. On the other hand, there's a bunch of cool Martian Manhunter moments in this, and his millionth issue was one of the best (though they really should have included the Bryan Hitch drawn epilogue in Martian Manhunter #11, because duh.

The amazing original graphic novel from the ALL-STAR SUPERMAN creative team of writer Grant Morrison and artist Frank Quitely is back in a new deluxe edition hardcover, that includes a gallery of preliminary art that’s never been published before! Ultraman, Owlman, Power Ring, and Johnny Quick rule their world without mercy or opposition, until the sudden appearance of Superman, Batman and the rest of the Justice League! Realties clash as the Justice League travels to an alternate reality to face off against distorted mirror images of themselves… This Deluxe Edition features a new cover by Frank Quitely, plus previously unpublished sketch material and more.

I wasn't as wild for this one as many of you, who would probably have it in their personal top ten Martian Manhunter stories. It's still pretty good in my book, though.

In this new trade paperback collecting issues #7-12 of the smash-hit series, find out what who has joined the team after its origin! And why does Green Arrow want to join their ranks so badly? Plus, someone is out to get the Justice League, and he is determined to show the world how mortal these godlike beings really are!

There's that two page splash where the Alien Atlas battles the entire League at once. Then 174 other pages.
Posted by Diabolu Frank at 12:18 AM

So is all this Trinity War nonsense going to be as bad as I'd feared? Is that even possible? Maybe this is finally the inevitable entropy that happens right before the DC Universe will coalesce and re-ignite again. i.e. You have to hit rock bottom before you start getting better again. It seems that creators are still trying to prove that comics can be a serious art form, when really it might be time to swing back in the other direction and just write some fun stories that are...I don't know...fun to read.

And Wonder Woman with a chainsaw? I don't quite understand.

The whole Trinity War just doesn't make sense to me. Phantom Stranger and Vic Sage are two incredibly interesting characters in their own right (how solid is a character who can work in both a cartoon and a morally-ambiguous Vertigo series??) yet DC seems to believe both of these characters need to be saddled with a gimmick like Trinity War to be interesting. I don't get it.

The New 52 seems to be trying to follow Marvel with events, forgetting that some of those events were not well received. My hope is that J'Onn turns out being treated well. I do have to wonder how long the New 52 will last.

Dude. DC One Million is my jam. The MM and the Superman stuff, combined with Vandal Savage and Justice Legion A... Probably my most re-read JLA trade.

On the other hand, I love Earth 2, but don't know that it is enough of a MM showcase to make any sort of top 10. It's just him getting treated like an equal and having a couple kick ass moments, like the rest of the League.

I have some problems with his basic premise, but he name checks Martian Manhunter and Middleton, so he can't be that bad.

Will, the "New 52" is down to something like 45, so maybe we'll get a Martian Manhunter series yet. Will it be any good or last longer than a year and a half? That's the real question.

M.C., I'm going to give that article a meh, but it was nice to see Middleton mentioned out of the clear blue sky. There's a conspiracy theorist out there claiming that J'Onn will be in Man of Steel, so maybe they're trying to get out in front of that.

Liss, we've got several more years of the New 52 yet. It maybe be coasting on the fumes of the first year hype, but sales haven't dipped below pre-Flashpoint numbers. It's still a "success," but I strongly suspect the attrition on this thing will inevitably slit the throats of the current regime. Marvel and DC both are selling to old school loyalists, but DC pissed in our punchbowl, and all I hear is how dissatisfied most readers are. Personally, I've dropped everything but the stuff J'Onn appears in, and my response to "Trinity War" will impact that greatly. It's too easy to read about individual issues instead of actually reading them at $4 a pop, and maybe buy a collection of the Martian Manhunter back-up strip down the line instead.