Bio: Diabolu was an insane ancient Babylonian wizard whose hatred of mankind drove him to capture and imprison a host of monsters in an idol-head with the intention of using it to initiate genocide.

Bio: Born in the 19th century, Anton Arcane sought immortality, and found it only after he had lived long enough to become decrepit. Arcane sought a replacement body, leading to the creation of his monstrous Un-Men and many clashes with Swamp Thing. Arcane eventually died, became a ranking demon in Hell, and is currently the avatar of a corrupting supernatural force called the Rott. 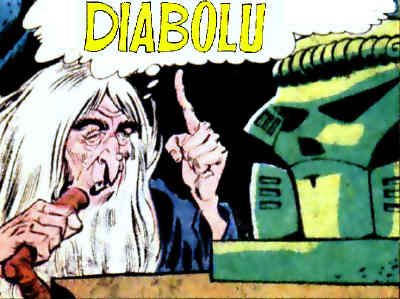 Idol Speculation:
This is another fun match-up between kindred spirits, but the scales do not favor the Vile Menagerie. Diabolu created and was the namesake to the idol-head that helped generated a year or so worth of adversaries for the Martian Manhunter. However, Diabolu never directly faced the Alien Atlas, and managed to kill himself through being an octogenarian fall risk who bumped his head on a table. Anton Arcane is meanwhile the nastiest, most implacable fiend to figure into the Swamp Thing's surprisingly long and often acclaimed career spanning multiple media platforms. Coming off of the Rottworld crossover, Arcane is probably one of the most formidable villains in the New 52.
Posted by Diabolu Frank at 3:13 AM

In a very slow creep to enough response that I feel inclined to end this sordid business, Diabolu the Wizard and Anton Arcane neutralized each other with half each of 6 total votes.