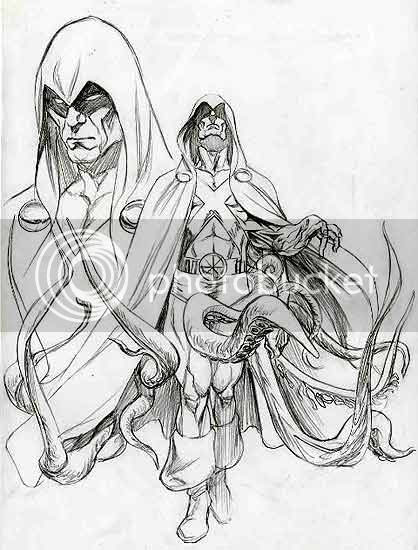 Prior to the weekend, Rich Johnston of Bleeding Cool directed fans' attention to Alex Ross Art, where the popular creator had begun selling original work from an unpublished Shazam revamp. Presumably, Dan DiDio passed on this in favor of Judd Winnick and Howard Porter's The Trials of Shazam mini-series, which proves what a brain trust is running DC these days. Collected here, you can see the most dynamic approach to Captain Marvel since, well, ever. Personally, I think Billy Batson should be delicately retconned into an African-American, ala Roy Thomas' 1980s Captain Thunder proposal, to make him viable and contemporary in a universe shared with Superman. Instead, there's a new Vulcan, Black or Son of... unknown, but looking pretty cool. Most curiously, Batgirl, Nightwing and Martian Manhunter are reworked to such a degree, this must have been intended as an Elseworlds or a massive new direction for the One Year Later initiative. I can't believe I'm saying this, but I very much prefer the José Ladrönn Conehead from Mars approach to this rather short on imagination take. Better a Skrull mixed with the Vision than regular Manhunter with Doug Mahnke tentacles and a Spectre cowl covering his trademark brow. Looks like Ross got some mileage out on the rejected Nightwing on his Black Terror for Dynamite Publishing, so not a totakl loss.

Agreed that this take on MM isn't really that great. Ross is kind of hit and miss when it comes to design. I'm not that big a fan of hoods anyway but especially not covering J'onn's unique noggin (say that three times fast).

That said, His Captain Marvel would be awesome with the right scribe.
At least there's Billy Batson and the Magic of Shazam to tide me over.

I kinda like Captain Marvel the way he is...all old-fashioned and looking like he stepped right out of the Golden Age, especially when he's drawn with the classic squinty-eyed visage. But I addictively watch black-and-white movies from the 40's so I'm speaking from the very fringes of popularity.

For a minute there, I thought you were going to say you prefered tentacles over Skrull. I never can guess with you!

The rework of Batgirl reminds me somewhat of the contemporary Batwoman. (Which I think Ross designed as well.)

I dunno...that tentacled Spectre J'onn has knocked Alex Ross down a few pegs on my Scale of Fangirl Respect. (Doesn't it remind you of the tentacled aliens from Galaxy Quest?)

Classic Captain Marvel is cool with me in the right hands, but he's rarely there, and sells even less often.

I never saw Galaxy Quest (I hate Tim Allen,) but Mahnke popularized the tentacles on J'Onn during his early '00s JLA run with Joe Kelly. I don't mind, but they really scream "Durlan" more than anything to me.

I mock the conehead & chin, but the general design was otherwise alright. Ryan Sook and others slowly reverting J'Onn's head back to normal while using the new costume got my hopes up, before Libra skewered him.

Weren't J'onn's eyes drawn kind of on the side of his head during FInal Crisis? Or am I remembering wrong?

I think whoever draws Martian Manhunter should be required to read a John Carter novel. After reading one of those, his character design made a lot more sense to me, and I think that's where his creators were coming from. (Certa, right?)

His appearances in Outsiders were pretty badass in my opinion. I was really lamed out when he was written out after the second issue.

J'Onn's look was very inconsistent from '06-'08. I got used to not getting used to it, so if his eyes were screwy in Final Crisis, it didn't register enough for me to take a mental note.

The general appearance of J'Onn J'Onzz dates back as far as Batman #78 (Aug.-Sep. 1953) Writer Edmond Hamilton was out of the pulps, as was Martian Manhunter co-creator Joe Samachson, so both would surely be quite familiar with Burroughs (and likely described their Martians similarly.) I can't speak for Lew Schwartz or Joe Certa's awareness, though.

I've yet to read any Burroughs, but I like how Ostrander keeps writing in four arms for J'onn, which I understand to be a nod to the John Carter stories. Not just in the main series either, in JLA incarnations when he's fighting off an alien invasion he totally rocks the extra appendages.

I've read somewhere on the internet (can't remember the site) that Certa swiped J'Onn's look from that of an alien in a Zatara back-up story from a 1930s issue of Action Comics (probably drawn by Fred Gardineer), but I've never seen a pic of this alien. Maybe I shouldn't believe everything I read on the internet.

Yeah, I heard about that Saturnian too from Action Comics 16 apparently. Wikipedia and a couple other places mention it but no picture evidence. I don't even think the Zatara stories have any reprints. It vexes me.

You guys gave me a research project for the evening...

Be vexed no more, ms!

I didn't think he would look so similar, but all one needs to do is switch the colors around, add cuffs to the boots, and ditch the gloves and voila!

You know Liss, I've long avoided a F.O.A.M. style clubhouse for this blog, but if folks keep contributing awesome material like this, I'll have to figure something more Algonquin out as a recognition. Awesome find! Is the story available in it's entirety online outside torrents? I'd love to run a post on it...

We know we're on another planet because the women wear pottery on their heads. Those big phallic cacti are scary. I'd like to read the rest of the story; its childlike crudity gives it a certain dreamy charm.

The costume could have been swiped from any number of science fiction magazine covers. And everybody knows aliens have green skin and no hair. But what about the brow? It's the way Certa drew the face and head that make his Martian so distinctive. Verdict: Certa didn't swipe from Gardineer. Not guilty.

Thanks for finally satisfying my curiousity, Liss. Frank, you must post her findings to your blog.

Thanks, Frank! Glad I could contribute. *bows* I am a librarian by trade, so finding things is my bailiwick.

Comic Book Database lists Action Comics #16 being reprinted in The Superman Chronicles #2 and the first volume of Superman Action Comics Archives, but they only reprint the Superman stories, unfortunately. No collections of old Zatara stories out there that I can find, if that were the case, it would probably be collected there.