2008 Ms. Martian Manhunter vs. Her Adam Warlock by Leno Carvalho 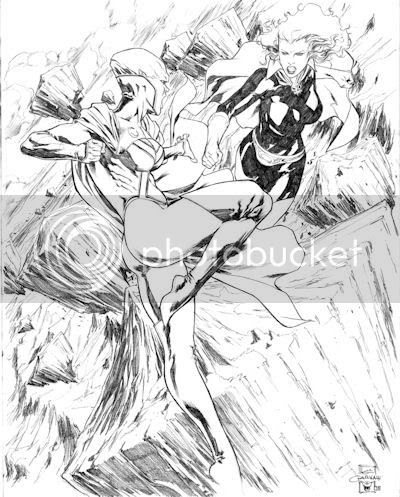 Leno Carvalho has been working here and there in comics for a few years now, most notably on the BOOM! Studios mini-series Station. From what I can tell on his personal blog, his specialty is teh hotties. As seems to be popular with them crazy androgynous kids these days, Carvalho turns the One Year Later Martian Conehead into a lady, and my favorite Marvel messianic paranoid schizophrenic Adam Warlock into an Eve, then has them catfight in midair. Or is that dogfight? I'm so darned confused by this sort of thing. Thanks to the Martian Manhunter Fotolog for exposing me to more unnerving transsexual Manhunter art, I guess.
Posted by Diabolu Frank at 9:15 PM

Yeah, I got nothing.

This reminds me of that...was is JLD?....issue where J'onn had to pose as a woman.

I just reread some of the Priest issues. He had a pretty interesting take on J'onn.

For my own part, I'll go on record with good, but also "challenging." This isn't Uncle J'Onn-- more like Professor X on one of his creepier power trips.

"Relax Diana, I'm just scaring the kids..." I think that's the quote. I think J'onn is a complex enough character where that doesn't ring completely untrue. A less light hearted side of "he sounds more like Batman everyday" from the JLI.