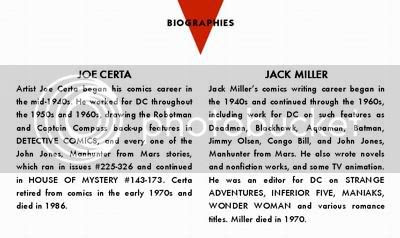 Tom Hartley has been laboring on his hypothetical DC Archives series for much of this year, designing new front & back covers, tables of content, and even writing introductions under the pseudonym "Wade Greenberg." It must be nice for him that he only needed one biographies page for nearly the entire project, seeing as Jack Miller and Joe Certa were the only clearly documented creators for most of the Manhunter from Mars strip. Obviously Joe Samachson gets credit for co-creating the character and crafting his first few installments, while it's been argued that Dave Wood and perhaps others pitched in for Miller on later scripts. Though his art style varied broadly, there's little doubt Joe Certa drew every installment of John Johns' thirteen year run. You can download the PDF here.

JOE CERTA
Artist Joe Certa began his comics career in the mid-1940s. He worked for DC throughout the 1950s and 1960s, drawing the Robotman and Captain Compass back-up features in DETECTIVE COMICS, and every one of the John Jones, Manhunter from Mars stories, which ran in issues #225-326 and continued in HOUSE OF MYSTERY #143-173. Much of his later work was for Gold Key on various horror and mystery titles, including the comics adaptation of the TV show, Dark Shadows. Certa died in 1986.

JACK MILLER
Jack Miller was a DC editor from 1964-1969, handling such titles as STRANGE ADVENTURES, INFERIOR FIVE, MANIAKS, WONDER WOMAN and various romance titles. From the 1940s through much of the 1960s he also wrote comics, especially for DC, including such features as Deadman, Blackhawk, Aquaman, Batman, Jimmy Olsen, Congo Bill, and John Jones, Manhunter from Mars. He also wrote novels and nonfiction works, and some TV animation. Miller died in 1970.

The Jack Miller bio is from the Aquaman Archives, which I don't have. Fortunately, "Fin Fang Foom" of the Marvel Masterworks Message Board was kind enough to provide the text. I wrote the Certa bio myself, based on various web sources.

You may notice that the screenshot's text is different from that of the actual Word document. I made some changes after I made the screenshot, but didn't bother to make a new screenshot.

This bio would apply to Vols. 2, 3 and 5. Vol. 4 might also have bios for Dick Dillin and Sheldon Moldoff, the House of Mystery #143 cover artists. But then, maybe not, since it's only one cover. Vol. 1 would include bios for Joe Samachson, Dave Wood and the contributors to the Batman #78 story.

A bio for a cover? Overkill.

I fixed the hyphens again. I did it once when I tried to proof the text using the direct code from your document, but Google didn't accept it, and I forgot to reedit.

Edmond Hamilton surely has an Batman Archive bio already, as should the artist, whose name escapes me. I've yet to see official verification of Dave Wood's contributions, so I'd hesitate on that front.

The penciller of the Batman #78 story is Lew Sayre Schwartz. The Batman Archives reprinting the Detective Comics stories are well into the late '40s, so the later volumes probably have some stories drawn by him. There should be various Archives that have a bio of the inker, Charles Paris, as well. Of course, I don't have any of these Archives.

Tom, I enjoy what you do, but I'm not about to sweat you on a bio page for a handful of guys who barely or never worked on J'onn J'onzz.