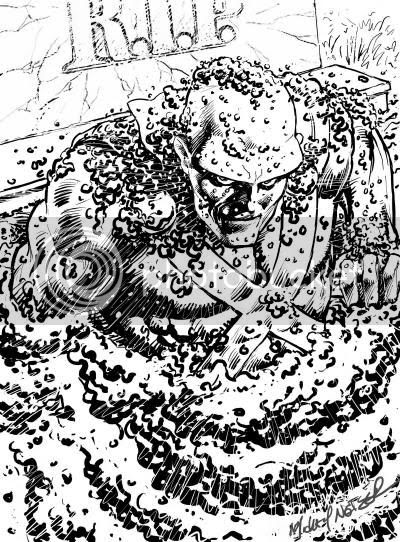 Rob Kelly has referred to Paul Kupperberg as the "patron saint" of his Aquaman Shrine. I'm much too territorial about this blog to ever accept anyone in that role here, but if I had to choose the closest approximation, it would be Bronze Age Manhunter from Mars artist Michael Netzer. The former Mike Nasser designed the 1970s logo for J'Onn J'Onzz, our own Idol-Head of Diabolu font, and the beloved default banner image that will return when I lay off the theme months. Netzer has also provided gobs of free digital art to myself and other bloggers, and has expressed a rare passion for the Martian Manhunter character, for which I am eternally grateful. I last corresponded with Mr. Netzer on New Year's Eve, when I substituted my long delayed "Manhunter from Mars Annual #2" (you'll love it when it finally appears) for his innovative "December of Despero" Pin-Up. We hadn't spoken in a while, so I thought I'd share a bit.

I was away for nearly 8 months last year and came back home last January. I immersed myself In Facebook and using their tools created Facebook Comic Con (a video on my site explains it). I'm still doing sketches there sometimes but here's one (by request) that you might have missed...

The link led to the awesome image above, and boy howdy, is it a doozy. Netzer continued:

Worked at a major newspaper designing the weekend magazine but that ended after 6 months. Took all my time and energy. So for the last few months I've been thinking of going out on another trek across the country, but family needs forbid it right now, so I finally started the big GN project I've been planning for the last few years. WAVE. We'll see If I can sustain it.

Strange as it is, those 3 JJ episodes in Adventure have established an inexplicable recognition of my work with the character. It apparently has more to do with J'onn and his precarious presence (or lack of it, depending on time-frame) from the DCU. My career was so short that it's actually nice to have such a short run make me associated with anything.


The high resolution "original" was requested by "big JJ fan Edward Kaye," who posted it on his blog Hypergeek on February 10, 2009, where he wrote:

As part of his Facebook Comic Con idea, Michael Netzer has offered the first 1000 people that signed up, the opportunity to get a free sketch by him. I was the sixth person to make a request, and here is what I wrote, “Hi Michael, this is a wonderful idea. I would love a free sketch, please! How about a sketch of J’onn J’onzz, I really liked his old look, before DC made his head a weird shape, then of course killed him off :( R.I.P.”

I picked J’onn J’onzz,the Manhunter from Mars because Michael is famed as being the man who gave J’onn his classic heavy brow look, and logo, which was reused repeatedly through the years, until DC tried a terrible revamp of the character in 2007. Michael was also heading a campaign to stop DC from killing J’onn, and wrote an open plea to DC to stop them from killing him.

Anyway, Michael took my request, and drew this absolutely stunning image... This was greater than I even hoped for, and I will be printing this out, framing it, and hanging it on my wall. I have always loved J’onn J’onzz, and I think that DC just screwed him in recent years, with bad revamps, and terrible storylines. I would love to see him come back in a good Vertigo series, where he could be rebuilt from the ground up. In fact, I would love to write that. Ahhh, if only…

Now if only whoever is writing that revamp does as good a job with the prose as Netzer did with the art...
Posted by Diabolu Frank at 9:00 PM

Luckily for us J'Onn J'Onzz J'Unkies, Netzer's talent is equaled by his generosity.

Geez, I didn't know Mr. Netzer was responsible for the Facebook Comic Con. It really is a small world.

I see J'onn has his game face on, right out of the grave. I can only wonder who he's gunning for...

That ain't so much a game face, as a "never stayin' down" face. When the student is ready the master appears...or something.

That's funny, your comment about being "territorial." I am too, but I've got all kinds of people in unofficial "emeritus" positions, like Patron Saint and Executive Consultant. :)

I missed your designating an "Executive Consultant." Whodat?

Its an unofficial title. :) Somebody at WB who loves the blog and gives me background info and WB-insider-y stuff.

They communicate with me via a little speaker on a desk, like on Charlie's Angels.