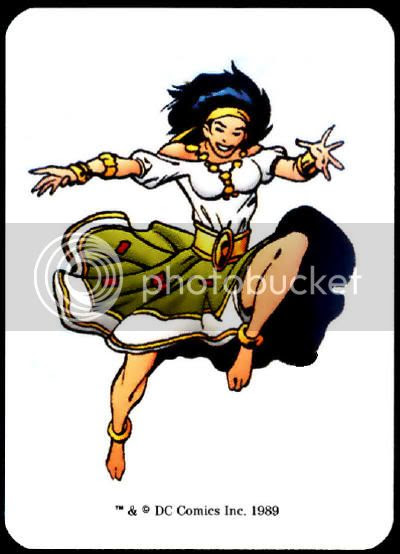 I managed to cover every major Motor City Leaguer except Zatanna, who was absent from the 1989 box set's cards, and I figure can wait until next year. That only leaves Gypsy below, who fits nicely in the December of Despero scheme, seeing as he murdered her family and lusted after Gypsy while merged with L-Ron. The art is from a Thomas Derenick panel, and clearly too polished to be convincing as anything other than another of my mocked-up character cards...

•Background:
Gypsy was a young street urchin who inhabited the sector of Detroit in which the Justice League took up residence shortly after Aquaman disbanded the original League in the wake of the alien invasion.1 Shortly after the JLAers moved into their new inner city HQ, Gypsy began using her camouflage powers to penetrate the League's defensive measures, in order to check out her new neighbors first hand. Out of curiosity, Gypsy began following the Justice Leaguers around, eventually stepping forward to aid the heroes against the menace of the Cadre, an act which netted her an offer to become a full-time Justice Leaguer herself.2 Gypsy later participated in the League's struggles against the power-mad Anton Allegro3 and a reactivated Amazo.4

The origin of Gypsy's powers and her true background remain a mystery. Just after the JLA broke up for good, Gypsy revealed that she was a runaway and returned to her family.5 In his bid to wipe out the new JLA, Professor Ivo sent an android to destroy Gypsy, but she managed to find the conscience that was lurking deep within the android's programming and convinced it not to kill her. The android then saw her safely returned to her parents' keeping.

Gypsy's happiness was to be short-lived, however. One day while she was at school, several months after leaving the JLA, a vengeful Despero arrived at Gypsy's home and callously murdered her parents.6 Gypsy would have been Despero's next victim, if it had not been for the timely intervention of J'Onn J'Onzz and the rest of Justice League America, who managed to halt Despero's insane rampage.7 Devastated by the loss of her family, Gypsy returned to heroing as a member of Booster Gold's corporate-sponsored team of heroes, known as the Conglomerate, whom she views as her new family.8

•Personality:
Gypsy's most dominant personality trait is her curiosity. It led her to sneak into the JLA headquarters on several occasions, and she even went so far as to surreptitiously follow them on several cases. She seemed to be somewhat shy and reserved, because she never wanted to talk about herself or her background, and she never told anyone the true origin of her camouflage and illusion powers.

Belated thanks to Tom Hartley, whose offering of a batch of about 30 character card scans was the taste I needed to seek more. He then sold his box set for a very reasonable price to a poor student to facilitate this crossover, because I just had to scan them all for myself.

Posted by Diabolu Frank at 1:21 AM

This is a good blog. Keep up all the work. I too love blogging and expressing my opinions