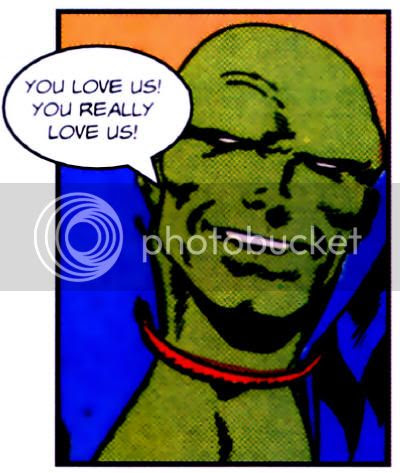 Morrison & Porter's JLA broke big and fast, so within the first year, Wizard Magazine hopped on the bandwagon with a team-focused special. Among the many sections was one titled "Monitor Duty..."

"Our readers were let in on the JLA action to find out their thoughts on DC's #1 superteam. The following questions were posted to our America Online forum (keyword: Wizard). The response to these questions was overwhelming and broke a Wizard record for the most responses to an AOL poll ever!"

1. Who is your favorite member?
Martian Manhunter took 6% of the vote, ahead of Wonder Woman (3%) and Aquaman (2%.) Batman was in the lead at 32%, and the rest were a roughly even split.

2. Who is your least favorite Leaguer?
Aquaman (41%) and Martian Manhunter (39%) took the lion's share with the remaining 20% divided between Wonder Woman, Green Lantern and Superman. Flash and Batman combined were only 3%. Emphasis was placed on a Aquaman's being a weak link, whereas J'Onn just seemed hit by unfamiliarity.

5. Who was the Best JLA Supervillain(s) of all Time?
Despero (30%) placed second, with the Injustice Gang only 2% ahead. The Hyperclan and Lobo split the other third, with the Extremists only rating 6%. Even with a poor sense of history, Despero was well remembered.

7. Who has the know-how to make the best JLA Leader?
This was the Martian Manhunter's best showing of the lot, at third place with 19%. J'Onn combined with the World's Finest for 82% of the vote. Green Lantern Kyle Rayner did not receive a single vote.

8. Who is the Very Last Person you'd want to see join the League?
Guy Gardner, a write-in, took 24%. That's some serious hate. Gypsy was only at 5%.

Questions 3 & 4 weren't Martian Manhunter related, although 14% of respondents wanted a Lobo rematch. It should be remembered that Wizard Magazine has always sucked, and that they have always attracted the dregs of comic fandom as their base. Further, these poll results were largely based on the first story arc or two of JLA, the previous four decades of stories given only token consideration. That said, man did people hate Aquaman and Wonder Woman in this book.
Posted by Diabolu Frank at 4:12 AM

"It should be remembered that Wizard Magazine has always sucked, and that they have always attracted the dregs of comic fandom as their base."

I'm a Guy fan and I love the Guy Gardner hate. If a character you're supposed to hate actually invokes that emotion in you, the writers are doing something right.

True that. I've always liked Guy Gardner. He makes me laugh at his best, and at his generic worst he's still a far better character than Hal Jordan. Every team needs a spoiler.

Wonder Woman less liked than the Martian Manhunter? I didn't see that one coming. Too bad the Alien Atlas was regarded as a weakling by fans. I still say he could take down Superman on a good day.

Oh, AOL keywords. Wow. I had forgotten about them. Good times.

Truth to tell, Wonder Woman sucked in JLA. Morrison either couldn't (thanks Byrne) or wouldn't do anything interesting with the character. Aquaman and Orion had more cool spotlight moments than Diana in that series.