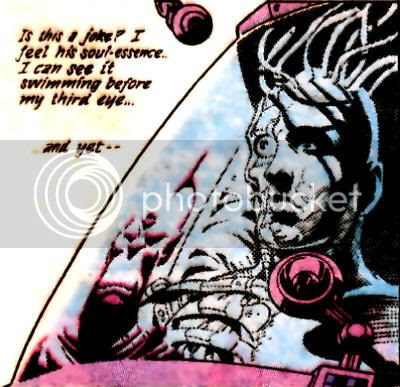 The sleazebag who stole the JLI's garbage turned out to be Wally Tortolini, a reporter for Spy magazine. With the help of Simon Stringfellow, Doctor of Urban Anthropology at Gotham State University, Tortolini managed to work up quite the expose. It was determined that ruined industrialist Ted Kord was the Blue Beetle, that Oberon had been hiding love letters from Big Barda in order to maneuver Scott "Mr. Miracle" Free into a world tour, and that the mentally unstable Guy Gardner owed $50,000 for "Seven years catatonic maintenance." Tortolini believed out Fire's hair to be naturally brown, and soliciting information with a color corrected picture led to the revelation that she was former Brazilian Secret Service agent Beatriz DaCosta. She was wanted for questioning after fleeing her country following a confrontation at an enemy agent's apartment that saw the whole city block set ablaze. Most of the rest of Tortolini's mocked-up article was made up of catty commentary. "As for the Martian Manhunter, what can we say? He's big. He's green. And he looks like Gumby. Let's leave the poor guy alone."

Over the better than four billion kilometer distance from Neptune to Earth flown under his own power, the increasingly recognizable alien figure had developed to hulking maturity. The universe seemed to sing with him in hate throughout the journey. A graceless landing in Detroit saw the alien unintentionally snag a United Nations flag off a pole on his way through the wall of a Heywood Defense Industries plant. He decided to tie it around his neck as a makeshift cape. He might have tied it around his waist instead, but he did not appear to have genitals, which might explain all that hatred.

"These humans... they have a name for me. A name that embodies their fears... their terror of my very presence. They call me... Despero. As good a name as any other... No doubt they will call me far worse when I have had my way with them."

Despero sought out the version of the Justice League that had most recently defeated him, unaware they had long since disbanded. Despero found the remains of Hank Heywood III, formerly known as Steel, and killed his way toward the containment unit that sustained the vegetative former hero. "What's wrong with you? Respond! Respond, damn you-- so I can have the pleasure of killing you!!" Despero had suffered impotently for too long, contemplating the darkest means of expressing his anger, and ripping off the head of a brain dead cyborg would not do. "Steel may have had the good fortune to die while I was gone... but the others, I trust, haven't been so lucky. My hate must have expression. And it will. It will."

Somewhere in suburbia, Edward Reynolds was enjoying his Ozzie and Harriet, and his wife with June was chiding him for his "white, male protestant" fantasy. Gypsy was at the library doing research for a school paper, and her parents were glad she'd left "that super-hero nonsense" behind her. June was killed instantly upon Despero's impact with their house. Edward was allowed a moment to take in the horror of it before his neck was snapped. "In his heart: the most baffling feeling in all Creation. Love. Illogical. Insane. Why do they cling to it so? It has no charge to it... no power. My hate fuels me. Gives me purpose. His love... is a joke. I feel her coming. I feel the lightness of her spirit. She, too, is filled with this ridiculous love. I think I can change that. But first... some minor repairs to the dwelling. After all-- I wouldn't want her to think there was anything wrong." 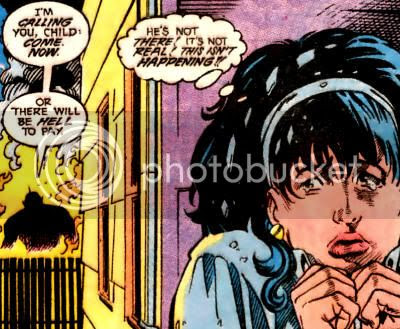 Gypsy had been working hard, studying, grateful for school being easy compared to her former life on the streets and with a super team. "Sometimes those J.L.A. days seem like a dream... If I didn't get a letter from J'Onn every couple of weeks, I'd swear they never happened. I like the quiet life... the family life... 'Sides, from what J'Onn's told me, the League isn't exactly what it used to be. He says it's more like some kinda super-hero sitcom than-- speaking of sitcoms..."

Gypsy's father was seated in his lounge chair in front of the television. She assumed he had fallen asleep, until she spotted the blood soaking into his sweater and the blank expression in his eyes. From behind, Despero simply stated, "Daddy is dead, child. And so are you." Gypsy evaded the third eye blast that ripped her father's body to pieces, then dove through a nearby window. Her home exploded behind her. Gypsy ran to hide behind a nearby house. "Oh God... please tell me this is all a dream... My mother... my father... my brother... they can't be--"

"I'm calling you, child: Come. Now. Or there will be hell to pay." Unanswered, Despero blew up another house with his third eye. Gypsy ran out into the street to hail a commuter bus, but a series of energy blasts scared the driver off. Invisibly, Gypsy still managed to steal a ride on the back bumper. Gypsy still couldn't believe her family was gone, but she still had the power to escape.

At the New York embassy, Kilowog couldn't figure out why people like him still had to pull monitor duty when the system was now fully automated. However, an alert of widespread damage and death about a hundred miles north meant the former Green Lantern needed to talk "t'the top dog... the big green guy..."

Hiding on a train rolling near Rahway State Prison*, Gypsy continued to cry for her whole town as it was being torn apart by Despero. "Everyone I know... everyone I love... Mom... Dad... Evan-- oh, God--" Gypsy started to lose it, but caught herself. "If I can just get down to the city. Find J'Onn! He's the only one-- the only one I've-- Oh... no."

Despero stood in front of the train tracks and laughed as the conveyance toppled down a hillside at his whim. Gypsy's leg was broken in the wreck, but she maintained her invisibility. "I know you're here, girl. I can feel your presence. I can smell your essence. How long do you think you can hide from me? I've enjoyed the game till now. The destruction. The death. But I'm tired of playing." Despero threatened to kill other survivors of the train crash if Gypsy did not reveal herself, and she complied. Flat on the ground, Gypsy resigned herself to death, but Despero hesitated. "Well-- what are you standing there for? Do it! DO IT!"

Despero's head was turned over his shoulder, away from the girl, as he had become aware of an old threat returned...
"Get away from her. Right now."
"J'Onn?!"
"Come to watch the girl die, have you, Martian?"
"There'll be no more deaths today, Despero-- except perhaps-- yours." 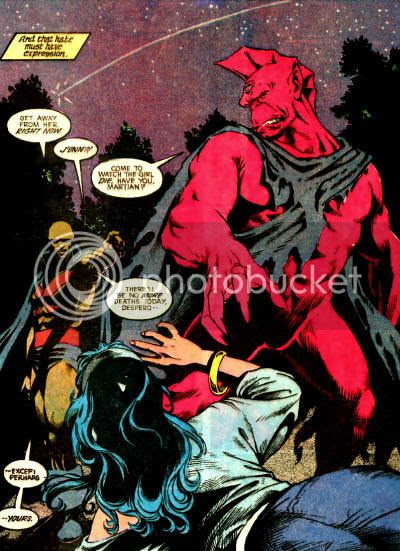 As I previously discussed in detail here, the JLI was all fun and games until somebody poked their eye out. Part of being the "funny" super-hero book was that you could shoot for poignancy of pathos through a tonal change-up, but there was always the potential for readers to miss the beat and wonder what kind of laugh was being built. Hell, this issue started out with not only a parody of Spy magazine, but also that type of detailed ancillary material popularized in serious works like Watchmen. Ten pages in, there's a girl with her head shoved through a monitor screen, a technician's twisted body on the floor, Despero's ripping the head off Steel, and there's a knot in your gut telling you there's nothing funny coming out of this. Despero has never been more vile, nor Gypsy more tragically sympathetic. Just when you've had all you can stand and are waiting for a young heroine to die, the Manhunter from Mars appears. J'Onn J'Onzz intends not only to end the suffering, but with his outstretch arm pointing out the evil in their midst,
he threatens biblical justice. Clearly, one of the finest moments in the Martian Manhunter cannon, and an instant classic.

Number of times Despero used the word "hate" this issue: 15

(*Which had been renamed East Jersey State Prison two years prior, and was actually well south of New York in Rahway, New Jersey)

I whole-heartedly agree that this is one of the best J'onn moments. The art is phenomenal the dialog has just the right gravitas, and because J'onn is not Superman, with those comics code enforced morals, you believe that he just might kill him.

As I recall, the fight in the next issue doesn't quite payoff this cliffhanger, but great none the less.

Hi, i just want to say hello to the community

That's true, M.C. To continue building the threat of Despero, J'Onn's credibility kind of got thrown under the bus. Still, it's part of why Despero still works as a Manhunter villain, whereas he's kind of been worn out as a greater DCU threat again. Ooo Starro. I'm so scared of Frazetta's Death Dealer + a space fishy.

I just re-read it, and I do actually enjoy the fact that Despero's initial psychic attack that takes J'onn out of the fight for a while is the inspiration for his undoing. Also, while I prefer J'onn doing the punching, I enjoy Guy's more martial brand of ringslinging, in great effect here.

The best part for me in this issue is still Despero's choice of cape. It's just the icing on the cake for me.

I like the cape in that one instance, but when it just "happens" a few more times, it gets tired. Personally, my main concern is that I want pants on that pink bastard on every occasion hereafter.

this posting has more good clip art. the close up of Gypsie and MM's pose are really well drawn.