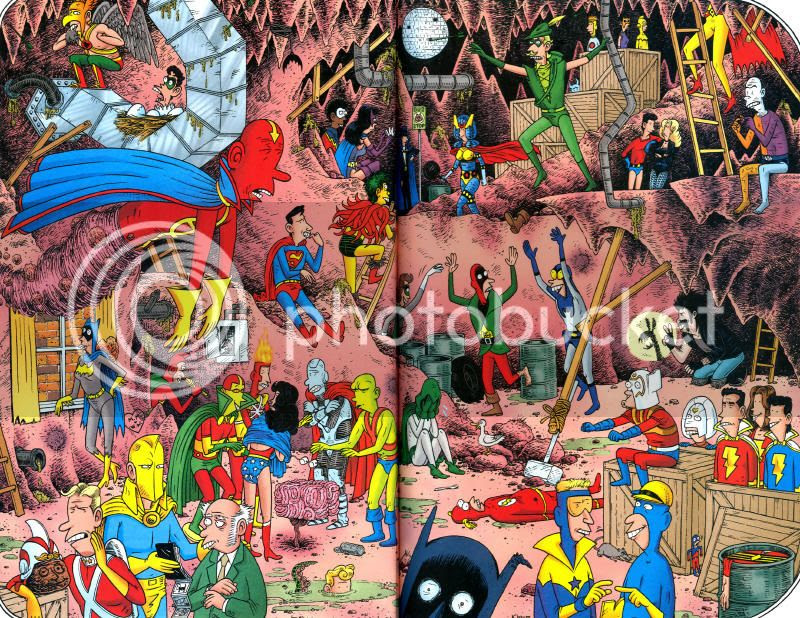 Bizarro Comics! was a 2001 hardcover anthology which allowed alternative creators to play around with DC characters. It won the 2002 Harvey and Eisner awards in the Best Anthology category, and I'm going to cover it off and on across my blogs on Wednesdays for a
while.

An rather lengthy bridging story tied all of the individual portions into one narrative, including the pin-ups. Mr. Mxyzptlk inadvertently selected Bizarro as his champion in a cosmic game with the 5th Dimension as the prize. However, Bizarro had to be taught how to be a hero and the rules of this specific contest. To insure his lessons were sinking in, Mxyzptlk performed "x-rays" which offered views of what was on Bizarro's mind. "Bizarro X-Ray One" was a splash page of Bizarro World by Gregory Benton. "Bizarro X-Ray Three" saw Gilbert Hernandez presenting a two page spread of the DC Universe as a kid's club. In the middle was John Kerschbaum's Bizarro interpretation of what super-heroes are, and is so rich in detail that I decided on a reasonably large and (appropriately?) imperfect scan for readers to pick through themselves.

Posted by Diabolu Frank at 1:38 AM

I wouldn't have picked up on the cape part if you hadn't mentioned it.

And hey, look, it's Adam Strange! Talking to...a shrunken head that happens to be in his helmet?

Does The Flash remind anyone else of Homer Simpson?

My God, this is adorable. So much fun picking out all the characters. And OLD Starman! Woohoo!