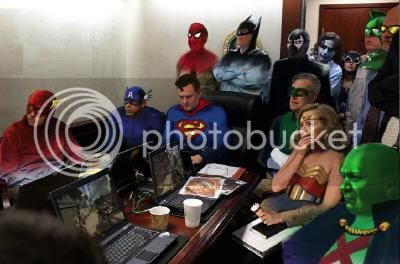 May 5, 2011
Clinton: Allergy led to my Situation Room photo

May 10, 2011
Picture of the Day: Superheroes! The Ultimate Situation Room Meme

It takes a mighty big picture to get this weird. I love how prominent they made J'Onn J'Onzz, because all that green draws your eyes right to him. This is also the best executed mash-up, with Robert Gates totally looking the part. This could very well end up being one of the most widely circulated Martian Manhunter images of all time once it's done making the rounds. I've sure seen it enough times without trying. Despite previous associations with Superman and Spider-Man, I'm really glad Obama ended up as Captain America. Not only do the colors suit him, but it's a nice zing after all that Birther nonsense (while anticipating the inevitable "Osama isn't really dead" push back.)
Posted by Diabolu Frank at 10:11 PM

I truly loved the photo, and thought that J'Onn was the best done of the lot. I think that a lot of people are going to look at this. It might raise his profile a bit.

M.C., I was just looking at that image a few hours ago. I plan on devoting a quick post to it, or else I'll leave it until the solicits go up next week. I liked your reveal better.

Frank can you tell who the characters are all suppose to be. The ones in the far back are hard to tell.

1. Vice President Biden as The Flash

7. Admiral Mike Mullen, Chairman of the Joint Chiefs of Staff, as Spider-Man

12. John Brennan, Assistant to the President for Homeland Security and Counterterrorism as Captain Marvel (with Kree DNA).

13. Director of National Intelligence James Clapper as possibly the Cartoon Network version of Robin, or maybe just a guy in sunglasses.

Re: James Clapper; I was thinking Black Lightning?

oh man how do people come up with stuff like this? :)

So you're saying the guy who photoshopped this was Geoff Johns?