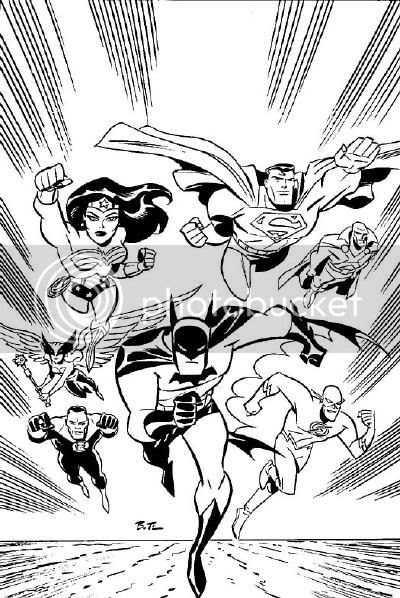 I've been following order catalog solicitations since the early '90s, and online ones since late in that decade. I tossed out all me old catalogs in the early 2000s, and I've noticed that online queues tend to dry up and blow away after a while. As both a means of preservation and an easy generator of daily content, I think I'll begin reaching back as far as I can for Martian Sightings before I started doing them in 2007...

Troubled by disturbing visions from his time at war, the Man of Steel seeks professional help. Meet Dr. Claire Foster, Superman's psychiatrist! But can therapy erase the disturbing thoughts racing through Clark's head?

I'm sure I tossed through this issue back in the day, but I don't really remember it.

After much anticipation, and in celebration of the holiday season, the League finally elects a new member. It's daring Yuletide action for the World's Greatest Heroes' newest teammate…Santa Claus?!? But will the Red-Nosed Ranger pay the ultimate price on his first mission? Only Plastic Man knows for sure. Find out in a story we could only call "Merry Christmas JLA...Now Die!"

For some reason (maybe the Last Laugh crossover) I stopped reading this book for a few months before the Joe Kelly run started. This has been sitting unread in a box for almost a decade.

A new era for the DC Universe begins here! When a city filled with alien super-beings crash-lands in California, only the World's Greatest Super-Heroes can hope to contain the damage. Struggling to control their path across hundreds of miles of cities and towns, where can the combined heroes of Earth and Haven find a safe place for the space-born city to stop its incredible journey? For more information, see the feature article.
FC, 48 pg. Prestige Format $5.95

I really enjoyed this series, and tried covering it here a few years ago, but became overwhelmed by attempting to summarize all the subplots and introduce all the characters. It's a sprawling book, and I always wanted to see J'Onn J'Onzz play around in Haven some more.

The current (and some would say greatest) incarnation of the World's Greatest Super-Heroes is the focus of our climactic issue! The newest League faces the JLA's oldest threat: the shape-changing Appelaxians, the very first foes the JLA ever faced! At the same time, the Earth is being overwhelmed with natural disasters as Gaea, the spirit of the earth, sick of being poisoned by humanity, declares war. Earthquakes, floods, tidal waves all threaten to scour humanity from the Earth. It's epic action as only the modern day JLA can bring you!
FC, 48 pg. (7 of 7) $3.50

I gave up on this series halfway through, because I hated the art and the wimpy continuity tweaks within. I did finally buy this issue for about twenty cents a while back, but haven't read it.

A fully-painted hardcover featuring fantastical recreations of the JLA! In a universe of darkness, a world without a name struggles to heal itself after generations of war. And against murderous odds, a solitary boy must lay claim to his heritage, and topple walls of ignorance and fear in order to save his home. For more information, see the feature article.
FC, 104 pg. Hardcover $24.95

I covered this book here. I don't recall liking it very much, as it was a poor fantasy story with DC characters inserted willy-nilly.

A new ongoing series based on the Justice League animated show on Cartoon Network begins! When a meteor lands in an American suburb, the League is called on to investigate. Soon they are drawn into an intergalactic conflict, but it seems as if the real threat may be one of their own…Green Lantern! For more information, see the feature article.

Check out the original Bruce Timm pencils, before Alex Ross painted over them! This was an okay series.
Posted by Diabolu Frank at 12:00 AM

I literally thought a.) a new series drawn by Bruce Timm was being released and b.) some new Justice League cartoon I never heard of was about to hit the air. And I got all excited.

This is what happens when you read things at 4 a.m.